Architects are the masterminds behind huge office buildings, theaters, cathedrals, and homes, but they are also known to do some landscaping and pathway creation when their design is on a large lot.

However, architects are not usually the person you think of when it comes to the construction of roads.

A lot of training and schooling goes into the planning, paperwork, legality, and design of highways, city streets, and roads, and that means you need the right person for it.

To Give You an Idea of Road Design:

Architects do not design public city roads or grids, but they do design sidewalks, parking lots, and pathways on the private lot that they are designed for an office space or apartment building. City streets, roads, and highways are designed by civil engineers or urban planners. 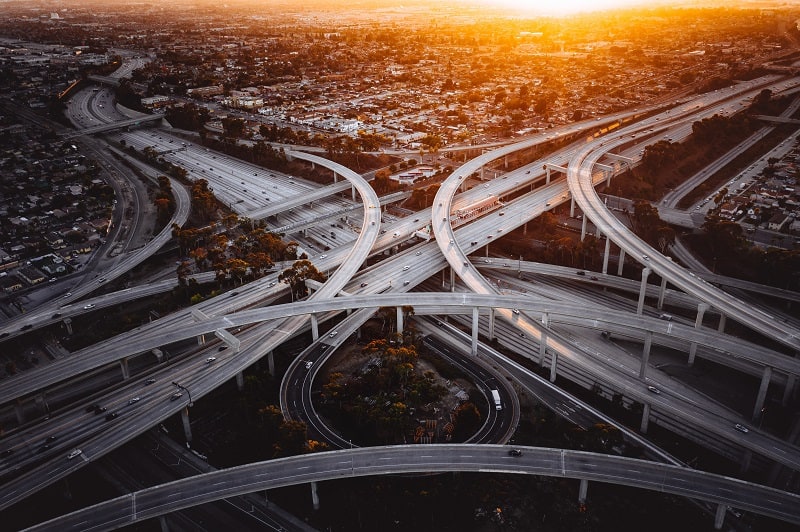 However, the two go hand in hand and can rarely exist without the other in a developed society.

For example, infrastructure is considered to be the foundational backbone of a society, including those roads, water systems, and electric grids.

Then, with a foundation placed down, architecture swoops in and expands upon it.

Architecture is the structural design of a single building, home, monument, or sometimes bridge.

So, while roads are not technically considered an architectural creation, architecture itself requires connectors and foundational structures like roads in order to work properly.

Are There any Architectural Companies that Mainly Design Roads?

The primary construction of roads is done by construction and civil works companies that are hired by cities and governments, as well as some private companies, in order to make roads and street grids happen.

Furthermore, companies that do construct roads are often not designers. Civil engineers and city planners will design the roads, streets, and grids, and construction companies will pave, carve or construct piping beneath the roads per the city planner’s request.

It is rare that an architectural company would design roads.

However, an office building with its own parking lot and side-streets or maintenance driveways will probably have been designed by the architect who constructed the building, landscaping, and overall lot that the building sits on.

This would not be considered an official road, so much as a driveway or parking lot, however.

Here are a few construction companies that pave roads in the United States:

Who Gets to Decide on the Aesthetic Aspects of a Road?

The term for who decides the design of a road changes from highway engineer, civil engineer, and pavement designer, depending on the project and where it is located.

Often city planners and civil engineers work together on streets and map grids, while highway engineers are also civil engineers that have to understand the curve of a road, the mass of a car, and the speed at which that car is driving to ensure safe travels for all passengers that drive upon it.

The aesthetics around a road, such as trees, pavement, lampposts, benches, fountains, and other decorations, are usually done within the “urban design” and “landscape architecture” fields.

Landscape architecture incorporates civil engineering, urban and industrial design, ecology, and regular architecture, depending on what you are trying to achieve.

While you wouldn’t exactly say that “an architect is in charge of urban design,” you might say that an architect could be consulted or hired to help make a project come together to create something beautiful.

Who Designs the Pavements?

The design of the pavement of a road is usually a “pavement designer” or a civil engineer who is hired to create a space, road, or street.

If a civil engineer is creating a design for a cobblestone street in a fancy downtown shopping district, they will inform the construction and civil works company that will be laying the pavement and doing the final construction of the project.

That construction company will lay the cobblestone and brickwork down per instructions, but they themselves will not design it.

Should there be necessary changes that have to be made that arise from problems that the civil engineer didn’t predict, the construction company may help with the redesign by consulting on what needs to change.

Do Architects Design the Surroundings of a Road?

Architects can assist in the design of urban planning and design around the construction of a road, but more likely that will be a civil engineer or city planner.

Sometimes it will even be a company that would fall under the category of landscape architecture.

A traditional architect that is working on an office building will have a hand in the design outside of the building, including landscaping, sidewalks, parking lots, and any other aesthetics, but they usually don’t work on public roads without being part of landscape architecture or civil engineering project.

In the end, an architect is someone you go to when you need to design the floor plan of your new home or the overall construction of hundreds of office building floors.

If that’s the case, you’ll be in the right hands!

However, if you need someone to plan your city streets, highways, or grid systems, consider a civil engineer.

That’s what they are there for.