Do you dream about vision boards and color palettes? If the idea of putting together a cohesive design for a home excites you, then you might be ready for a career in interior design. However, many individuals are hesitant to take that leap until they see the real statistics about the industry and its projected growth.

There is plenty of good news for those who want to head back to school for interior design! The market looks promising for these professionals, but you don’t have to take our word for it.

Here are some of the facts and statistics that you need to know! 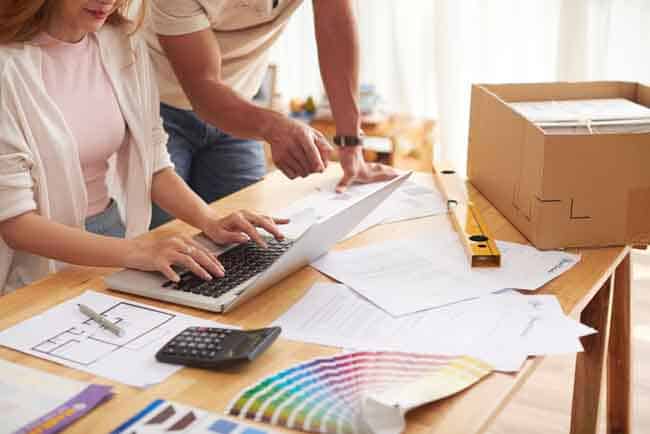 One of the first things that you should know before hanging a sign in your front yard advertising your services is the schooling required to be an interior designer.

There are also ways to work your way up in a field first and gain real-world experience to become a successful designer. However, many firms will require a more extensive Bachelor’s degree before agreeing to hire you.

You may work for a firm that specializes in interior design, architecture, or engineering and may require a degree in one or even all of these! The various positions within these firms are endless, but your education is the foundation upon which you will be able to work.

Be sure to choose a college and program wisely!

Related Article: Do I Need an Interior Designer or a Decorator? (Helpful Tips)

Once you’ve decided which route you would like to take, you now must prepare yourself for the cost associated with becoming a professional interior designer.

Depending on what type of school you go to, the annual tuition rates will vary. Public schools can range in price from $8,000 to almost $60,000 based on your state of residence. These schools typically give substantial discounts to students who live in-state. You may also save money by selecting a local school that does not require you to live on campus.

Keep in mind that private school tuition will be even higher. A lot of students end up at small, private arts colleges that specialize in programs like interior design.

Unfortunately, these excellent programs are often pricier than their public-school counterparts.

Some experts estimate that you should be prepared to pay roughly $33,000 per year on average.

What do interior designers look like in real life?

Understanding the current industry market and who dominates that industry is a critical facet to consider. While it may not ultimately play a role in your decision to return to school, it can help you know what to expect from a professional or a competitor.

The first and most shocking statistic is that women heavily dominate the interior design industry. Nine out of ten interior designers are women, which means that men make up only a small sliver of professional designers. This is exceptionally out-of-line with other branches of the arts, which are much closer to equal, with men being slightly more dominant.

Not only that, but you might be surprised by the average age of your designer.

While many people believe that this industry is dominated by a younger generation, the truth is that the average age of an active interior designer is forty-one. These designers tend to have years of experience in the field and know how to put together a room with greater efficiency.

Looking at ethnicity in the design field is also extremely important. According to a census coordinated by the American Institutes of Graphic Arts, the industry is predominately white (73 percent), followed by Asian (eight percent), Hispanic (7 percent), and African American (3 percent).

While these numbers do not necessarily reflect those of interior designers exclusively, they are vital benchmarks to consider for the design industry as a whole. There is always a definite room for improvement when it comes to diversity.

Related Article: Do Interior Designers Travel? Here Are The Facts

Where Are Interior Designers Located?

Is there a high demand in your area for interior designers? Knowing and understanding the market in your city can help you to make an informed decision about whether this career path is ultimately for you. Interior design is more prevalent in some parts of the country over others, mainly because this is seen as a luxury service.

As a result, it makes sense that the majority of interior designers are found in states with higher incomes and wealthier neighborhoods: California, Florida, and New York.

Florida has the most interior design firms in the country, with 1,536 firms total.

Some states, including Alaska and North Dakota, have fewer than fifteen registered interior designers each to serve the entire state.

In the United States as a whole, there are close to 100,000 firms (94,995 to be exact), which employ 116,466 interior designers. This just goes to show that there is indeed a market for interior design services in every part of the country. However, some areas are going to be more saturated than others.

Carefully consider the area where you live and how much competition there is between interior designers.

Where is the future of this industry headed? The projected growth is all over the place, with many major sources disagreeing about how quickly they will see growth. According to the United States Bureau of Labor Statistics, the job outlook should rise approximately four percent between 2018 and 2028. This is about as fast as other industries will grow during the same period.

With this projected growth, it is estimated that roughly 3,300 new interior design positions will become available.

The previous decade saw an explosion of new interior design firms and professionals entering the industry. From 2008 to 2018, experts projected that there would be a twenty percent increase in the number of interior designers in the country.

Growth has slowed down considerably, but it is still rising – even if it is slowly.

The four-percent growth is good news for those who want to get their feet wet with interior design. However, it is also great news for homeowners who are interested in remodeling their homes. The influx of designers means that you will have plenty of choices for someone whose style aligns with your own.

What Do Interior Designers Make?

The interior design industry is a booming business. Among all of the interior design firms in the nation, they have raked in a collective $10 billion in revenue annually. This may seem like a lot of money, but you must keep in mind that not all interior designers are highly paid for their work. Entry-level positions still exist, and some professionals do not make much each year.

The average starting salary for an interior designer fresh out of school is just a tad over $24,000 per year. This meager salary can make it hard to pay back those student loans while pursuing a career in the field you love. Roughly ten percent of interior designers make close to this figure each year.

With the highest and lowest ten percent accounted for, we need to turn our attention to the average. It is more likely that an interior designer will fall somewhere in the middle of these two numbers. The average annual income for an interior designer is around $53,370, according to the Bureau of Labor Statistics. Broken down into an hourly rate, they typically make $25.66 per hour.

The market looks excellent for those who are considering testing the waters as an interior designer. Be prepared to undergo schooling, serve your time as a lower-paid professional, and educate yourself on the important issues facing homeowners today. With this mindset, you can begin to take the industry by storm.

In another survey led by the AIGA, they found that interior designers are the happiest at their current positions. Almost ninety percent of interior designers polled claimed to be happy with their jobs. Interior design firm managers and other leaders boasted an even higher satisfaction rate of 93 percent.

As a homeowner thinking about hiring an interior designer, these facts and statistics should help you to understand the industry better, and also excite you about starting a career in this field!

Consider the education of any potential designers you hire and make sure that they are charging fair rates based on the national averages. With this knowledge under your belt, you can rest assured that you are getting a quality job instead of being ripped off by an unqualified designer.