Cobalt is a manufacturer that has been around for over four decades now.

They make lines of luxurious sterndrive and outboard boats and a range of specialized wake boats.

Are they reliable, good, and worth the cost?

Here’s How Good Cobalt Boats Are:

Cobalt Boats is recognized as a high-tier manufacturer of powerboats. Their reputation is consistently high quality in the construction, luxury, and speed of their boats. They are respected across the industry, and their boats are known to be among the best you can buy. 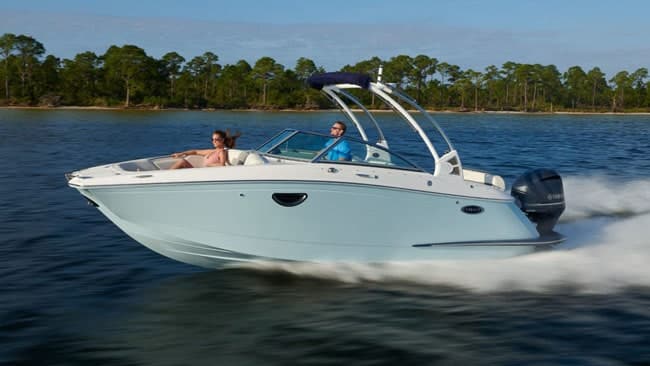 A Brief History of Cobalt Boats

In 1968, Cobalt Boats was founded in Neodesha, Kansas, by Paxson (“Pack”) St. Clair. Their focus was high-end speedboats.

Their early models were small to mid-size outboard driven boats and larger, family-friendly sterndrive cruisers. This heritage never changed and is reflected in their current lines today.

The company gained a reputation for quality in its construction, luxurious amenities, and the speed of the boats. They developed a series of stylish tri-hulls beginning in the 1970s that were recognized throughout the industry.

In the 1980s, with the rise of towed water sports, Cobalt began seriously developing wake boats. They have since become leaders in the industry through their unique combination of forward-facing propellers, hull design, powerful surf gate, and ballast options.

Over the years, as the business grew, the company remained in Neodesha.

The plant expanded as needed, and by the mid-2010s, they were making 2,000 boats a year at the plant. All design and tooling remained in-house.

Cobalt remained independent and under St. Clair’s leadership, but in 2017, he finally agreed to sell the company to Malibu Boats.

He joined the board of directors of Malibu, and the company pledged to maintain the Neodesha facility for the manufacturing of Cobalt Boats.

Every manufacturer of wake boats has its own methods of generating superior waves for surfing or boarding.

Usually, these boil down to hull design and ballast.

While Cobalt is certainly the case, they also have a unique feature with their Volvo Penta FWD engines. These have forward-facing propellers which counter-rotate so that they pull the boat forward rather than push it.

Cobalt claims this gives better acceleration, fuel efficiency, and the added safety paradigm by having the prop further under the boat. They also say that it makes for a quieter and smoother ride.

Beyond the unique prop arrangement and function, Cobalt has a large surf gate that pushes out from the hull, creating larger and longer waves to either side of the boat.

The advantage here is that you do not have to be very close to the boat, giving the wave surfer or wakeboarder more area to perform.

The last components of Cobalt’s Surf System are the hull design, which displaces more water to either side and the ballast system. This is composed of six tanks filled as desired, creating wave heights based on the amount of water ballast taken in.

Taken altogether, these create a system where the boat can go from waves perfect to either surfing or boarding and back to smooth cruising at the touch of a few buttons.

How Reliable Are Cobalt Boats?

It would not be an exaggeration to say that in the decades of their existence, Cobalt has become the standard in the marine industry that other manufacturers are compared to and aspire to be.

All aspects of their manufacturing are guided by quality. The company adopted a policy of letting the price fall where it may.

Whereas many or even most manufacturers build a boat to a price point, Cobalt takes to opposite approach.

They can afford to take this approach because of their reputation for the outstanding quality of their boats. They are solidly constructed, and the fit and finish are the industry standard. Their layouts and materials are comfortable and functional.

One noteworthy thing is the dearth of negative comments on online forums concerning Cobalt. They receive near-universal praise on every corner of the net.

“I am a huge fan of Cobalt. I had a 262 for 12 years. Their quality is second to none. Be ready to pay, but they’re worth every penny if you can swing it. They also hold their value.”

How Durable Are Cobalt Boats?

There is no question that Cobalt Boats builds durable boats, among the best on the market.

The same families have made their boats of craftsmen for the company’s entire existence. Generations of builders have all worked at the same plant, using techniques that get better incrementally as better materials and procedures are developed.

While you can occasionally find someone online who has had a bad experience with their Cobalt, or someone with an ax to grind, these are rare. Nearly every owner has nothing but positives to say about their Cobalt’s durability.

One owner summed it up thus:

“Yes, the Cobalt quality is obvious, and it is not just visible surface fit and finishes, it is below the decks details such as quality and sturdiness of fiberglass, wiring/conduit/connectors, hardware/hinges/fitments, panel connectors, etc.”

What About Older Cobalt Boats?

From 1968 until now, quality has been the primary driver of the company.

That is why, despite their price, they have been a very successful company and set the standard that other companies aspire to.

That is one reason a Cobalt from 15 years ago looks similar to the one now. That also has an advantage in that they do not change parts often, so many parts from previous years are still being made.

However, at some point, these parts are changed in the manufacturing process. Their website says they have all parts dating back 7 years to be readily available through the dealer network.

They have some parts older than that, though, and many of their long-time dealers have accumulated a large selection of parts. A particularly obscure part may be available by the dealers contacting each other.

Cobalt has Owners’ Manuals on their website dating back to 1973, so some parts long out of production may be identified and machined for older boats.

What Are Typical Problems With Cobalt Boats?

It is difficult to qualify any problems being related by owners of Cobalt Boats as being “typical” as there is no pattern when problems are reported.

Instead, they all seem to be one-off problems that happen with any manufacturer.

The most extensive lists of problems can be found on Cobalt’s owners’ forum. Most of the owners will list problems that seem to be things that a dealer should have caught before the boat’s delivery.

These singular problems include a screw going through a wiring harness and severing the wires to the underwater lights, a fitting on the oil line being loose, tears in the upholstery, faulty speaker wiring, and bolts in the bimini backing out.

None of this is to minimize the individual owners’ experienced, but there is no pattern of problems in any of the company’s models that have emerged.

There is some concern about a drop-off in quality after the acquisition by Malibu, but so far, that has not materialized.

How Long Do Cobalt Boats Last Compared To Similar Brands?

Owing to the solid nature of their construction, Cobalt Boats will last as long as any other brand on the market.

This is another case where they are the industry standard.

That said, all boats must be maintained. Leaving a Cobalt – or any boat – out in the elements and failing to winterize it will result in major problems.

But a casual search of boats for sale online shows Cobalt Boats stretching back to the 1980s are available, so there is no question about their longevity.

Do Cobalt Boats Hold Their Value?

Boats made by Cobalt have a reputation for their strong resale value and looking at the NADA guides, it is easy to see why.

That is a depreciation of 42% over a decade, which is still considered to be good.

Are Cobalt Boats Still Being Made?

Cobalt Boats are still being made in the same location they have always been made in, in Neodesha, Kansas.

After their purchase by Malibu Boats, they pledged to maintain the Cobalt name and manufacturing in Neodesha. There is some concern that some manufacturers will be moved to another of Malibu’s plants, but this has not happened so far.

Cobalt has three lines of boats, their Outboards, their Sterndrives, and their Surf Class. Cobalt does not advertise prices online; instead, they direct you to one of their 130 dealers in their large network.

All of these models have extensive options for customizing according to the buyer’s taste.

Cobalt Boats are expensive, but they are among the best boats in the entire marine industry.

The big question asked about them on the internet forums is, Are they worth the money?

As with everything, this depends on the potential owner, but if you have the money, they are one of the best choices available on the market.

Cobalt – Worth the money? – iboats