They make a large number of models under several different lines, and their pricing is favorable.

Are they decent boats?

Four Winns is a solid brand of boats. Their reputation is strong in the industry and among consumers, with the company consistently getting high marks. They compare strongly to similar brands and even some more expensive manufacturers. 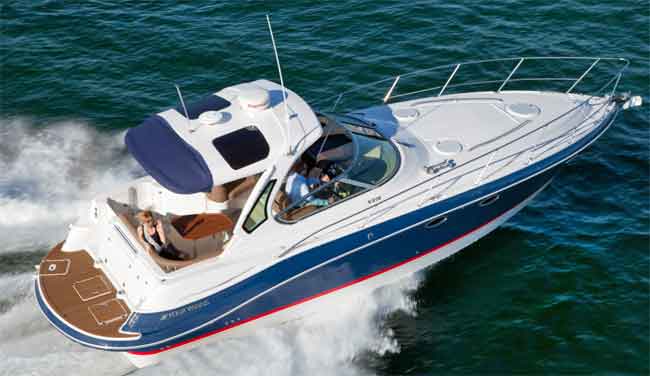 John Winn began his career as a sales representative for Starcraft after college and later started his own company representing several small boating companies.

With their father Bill Sr., John and his two brothers bought that company in 1975 and started Four Winns. They remained in Cadillac with a plant and workforce already in place, but in 1978 a fire destroyed their facility and threatened to end the company, which was bankrupt and had $2 million in debt.

With the aid of their local bank and their suppliers, they got back on their feet, but in 1980 the global oil crisis again put their business in jeopardy.

They struggled the next year, occasionally having to shut down operations and forfeiting their salaries. But they persevered and established themselves. They opened up another plant in Texas, and by 1986 were the third-largest manufacturer of boats in the US.

The other Winns left the company, but John remained and was put in charge of Four Winns and the other 10 companies OMC had purchased.

John remained until 1995. Much of what gave the company a family feel was eliminated, like profit-sharing and the company cafeteria.

The Four Winns company grew and flourished during that time, even as their parent companies struggled. They continue to innovate, such as introducing the proprietary Stable Vee running surface in 1993, which remains a selling point in the current lines.

They are still built in Cadillac.

How Reliable Are Four Winns Boats?

Most of the boats that Four Winns makes are considered entry-level to mid-tier, though there are a few luxurious exceptions.

In this range of boats, Four Winns is known to be a reliable brand.

The reviews on boating websites and forums are usually positive in terms of Four Winns’ reliability.

They have used various engines over their existence, but they are generally good quality and appropriate to power the boat.

Most manufacturers include electronics in their standard packages on their boats, and Four Winns is no exception. Their components and wiring are considered to be of good quality.

The main competitors of Four Winns are Sea Ray and Bayliner, and they are generally (but not always) regarded as the more reliable of the three in forums and boating sites.

How Durable Are Four Winns Boats?

Four Winns are generally perceived to be durable boats.

Many of their interior surfaces are finished, while many of their competitors’ out-of-sight surfaces remain unfinished. This cuts down on moisture retention in the fiberglass, which can lead to delamination and mold growth.

Their Stable Vee hull design, one of their innovative hallmarks, is not a marketing gimmick.

It includes vented after-pods which add buoyancy that help the boat get on a plane faster but do not add drag and keep stability in a turn. The deadrise angle and hull width are carried far forward for overall stability and to minimize rocking.

This design feature adds to the durability over time, as these hulls get less pounding than other designs do, making for a pleasurable ride. When it was introduced in 1993, it won a Popular Mechanics Innovation Award.

Four Winns usually gets favorable reviews on the boating forums for their durability concerning Sea Ray and Bayliner.

What About Older Four Winns Boats?

Four Winns has been around since 1975, and they have pushed quality and innovation for that entire time, both on the water and in their company facilities.

It is pretty easy to track down old forum posts concerning Four Winns made in the 2000s, concerning models made in the 1990s or even earlier. These are almost always positive.

Even with the company’s problems and the industry as a whole experienced, Four Winns has maintained its reputation for building quality boats.

In comparisons with comparable brands on forums, Four Winns routinely gets high reviews from owners.

Some parts for older Four Winns are still being made.

These are easy to find, as the company has a parts locator section on its website that stretches back to 2002, and these can be ordered directly from the site.

Parts for models older than that are harder to find. The best place to start is with the dealer network, which is listed on their website. Some of these dealers have been with them for several decades and have acquired older parts in their mechanics’ shops.

Beyond this, older parts will be difficult to track down. There is a small, privately-run forum for Four Winns owners that may assist in tracking down obscure parts.

There is also eBay.

What Are Typical Problems With Four Winns Boats?

Most problems reported by Four Winns owners seem to be isolated and involve the engines rather than other parts of the boat.

There are a few reports of throttling problems with the inboard OMC engine in the 1992-era; faulty shift cables may have caused this.

Some reports of engines from the late-1990s stalling or “hydro locking,” but these are comparatively few. There were suggestions a badly-angled vent may have caused this in the stern, allowing water to enter.

Some Volvo Penta engines from the mid-2000s had some problems with the fuel delivery system in a few boats.

This may have been a bad fuel filter or some problems with the computer module, but it did not appear widespread.

Compared to their primary competitors Sea Ray and Bayliner, Four Winns lasts as well or better.

There are few reports of problems in the construction of the hull itself.

It is important to note here that the company includes a lifetime warranty on the hull.

This is limited in that damage caused by the owner is not the company’s responsibility, but it is a testament to the quality of the hull’s construction.

As always, the care the individual boat owner takes in maintaining the boat determines its longevity nearly as much as the boat’s construction.

There are many Four Winns boats from past decades available on the used market, indicating that they are built to last.

Smaller Four Winns Boats hold their value very well compared to other brands, while the larger boats are about average.

Are Four Winns Boats Still Being Made?

Four Winns Boats currently has over a dozen base boat models divided into 4 lines.

Almost all of these base models have one or more variations, such as upgraded stainless hardware, graphics, and luxury (the RS models) or outboard options, resulting in over 45 different models.

Their deck boats are referred to as “hybrid deck boats,” as they are built for better performance than a standard deck boat. The smallest model of this line is the 18.5-foot HD1; the base model starts at $38,599, and the RS edition starts at $41,666.

Their Surf series of wake boats are modified versions of their deck boats, primarily featuring the surf package, which generates waves for wakeboarding or wake surfing.

Four Winns Boats has been around for half of a century and acquired a solid reputation.

They have a strong warranty on their hulls and are a solid brand with a well-earned reputation for innovation and quality.

Depending on the ownership of your Four Winns before, the boat could be in great shape, or it may need some work.

Either way, the overall construction is pretty reliable.