If you’re considering buying or renting an RV, the question of safety may not have entered your mind.

Recreational vehicles are larger than cars and project a sense of strength and security that few people would doubt.

However, RVs are just as susceptible to accidents as cars and trucks.

Some RVs receive crash testing while others do not. In most cases, testing is performed on the frames RVs are built upon, not the actual RVs themselves. Depending on the type of accident, any RV can be safe, but Class B camper vans are considered the best for all-around safety. 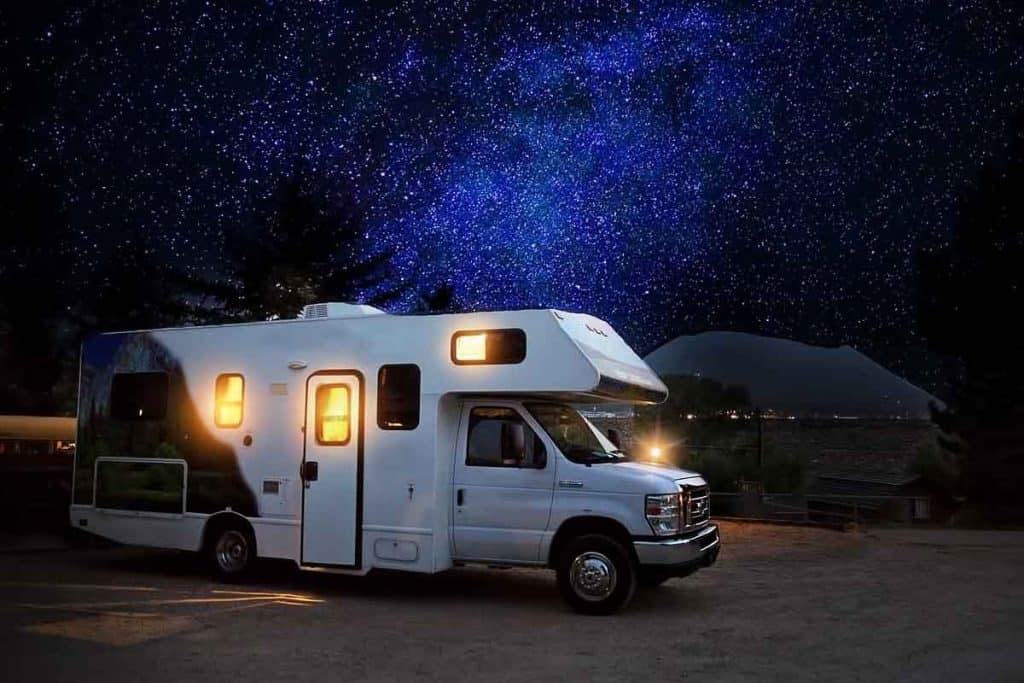 Are RVs Safe in a Crash?

Whether or not an RV is safe in a crash depends on a number of factors, including the Class of RV, type of collision, and location of the passengers.

In a fender bender, large Class A motorhomes may be safe, provided passengers are seated.

However, in more severe accidents, Class A is the least safe motorhome to be driving.

Many are not designed to withstand significant impact, either from the front, side or rear.

In fact, it’s not uncommon for Class A motorhomes to be totaled during a serious accident.

The mid-sized Class C is safer than Class A. Often, the driver and co-pilot are protected in collisions.

However, accidents are still dangerous for other passengers.

Typically, the “box” or living quarters of Class C are not built to absorb shock and leave travelers largely unprotected.

If traveling at high speeds, a sleeping passenger could be ejected from the RV during a head-on collision.

They provide the most protection with safety belts and airbags, and they do not have as many weak spots as Class A and Class C motorhomes.

However, regardless of the vehicle, projectiles are a danger to occupants during a crash.

Common accessories like televisions, tables, and other loosely-anchored objects can strike passengers and cause bodily harm during an accident.

Furthermore, passengers who are standing or walking during a crash also risk serious injury.

Do RV Manufacturers Have to Crash Test New RVs?

RV manufacturers do not have to crash test new RVs because they are not required by law to do so.

However, that doesn’t mean some RVs don’t receive crash tests.

Class B motorhomes are built on van chassis – or frames – by companies like Mercedes and Dodge.

These chassis are subject to crash testing by the National Highway Traffic Safety Administration (NHTSA).

So, even if a Class B motorhome is not crash tested by its manufacturer, the van it’s built with has undergone testing.

And, some companies like Roadtrek independently crash test their Class B camper vans to ensure quality.

Class C motorhomes are unlikely to be crash-tested by manufacturers.

Yet, because they are built on truck and van chassis, they are subject to crash tests by the NHTSA.

It’s important to note; however, the crash test only applies to the driver and passenger seats and not the living quarters or “box.”

Currently, standard testing is not performed in this area.

No rear-collision testing is done on Class C, either.

Class A motorhomes, the largest on the market, are not crash-tested by manufacturers or the NHTSA.

In fact, most large vehicles are not crash-tested in general.

Moreover, Class A motorhomes do not have to meet federal seat belt standards.

However, many newer Class A motorhomes do include over-the-shoulder safety belts for the driver and co-pilot.

How Are RVs Checked and Tested Before Entering the Market?

There are a number of ways RVs are inspected before entering the market.

Many RV makers perform quality control checks on their units before shipping them off to dealers.

However, it’s been said that less than half of all RVs are checked before leaving the manufacturer’s floor.

Also, it’s important to keep in mind these checks apply to construction and amenities, not crash testing.

The majority of RV manufacturers belong to this association, which performs random inspections of production plants to ensure they are up-to-code with requirements.

Manufacturers place an RVIA sticker on each new motorhome to assure dealers and consumers it meets association standards.

Often, the best dealers perform a Pre-Delivery Inspection (PDI) before letting a motorhome leave the lot.

Usually, these inspections cover the interior, exterior, and water or sewage systems.

It’s also important to remember systems such as brakes and airbags are tested by the companies who manufacture the chassis.

Automakers, like Ford and Mercedes, inspect and test these frames before leaving the automobile manufacturing plant.

For consumers, this means you never have to worry if your brakes or airbags will work.

What Types of RVs Are the Safest?

In terms of receiving the most regulation and safety standards, the Class B camper van is considered the safest.

As mentioned before, it must meet federal requirements for airbags and safety belts.

And, it undergoes rigorous crash testing by the NHTSA.

Also, Class B has the benefit of being made from steel and other metals.

This means they can better withstand an impact than the fiberglass shells of other motorhomes.

Although it will protect the driver and co-pilot during a collision, it’s not as safe for passengers as the Class B.

Class C is also vulnerable to impact from the side.

Often, these motorhomes are built with lighter materials, like fiberglass, which breaks up when struck by another vehicle.

Finally, when it comes to collisions, Class A is the least safe motorhome.

Although some owners feel they are better suited for accidents because they sit higher up on the road, Class A offers little in terms of impact protection.

Likewise, they are not required to meet federal seat belt requirements, and usually, they don’t come equipped with airbags.

Moreover, Class A is not tested for rollovers, meaning the stability of the roof depends largely on the manufacturer and the materials they use to construct it.

What Are the Best RV Brands for This?

Many brands can boast of being the best when it comes to the Class B camper van.

The reason is RV makers use van frames built by companies like Ford, Mercedes, and Dodge to house their RVs.

Often, the same RV brand will use chassis from competing automobile manufacturers to construct different models of camper vans.

So, it’s fair to say that when purchasing a Class B, you can trust many brands of manufacturers, assuming they use a reliable brand of chassis.

However, Roadtrek is one brand known for going above and beyond with their testing.

They are known for performing extra rollover, roof resistance, and seat belt testing.

How Do Class A RVs Handle Crash Tests?

Traditionally, Class A is built for luxury, not to endure accidents.

Every model is different, and it’s impossible to say how each would handle crash tests.

Like the Class A, the Class C does not undergo full-fledged testing, and it cannot be said whether or not the living quarters would pass or fail a crash test.

How Do Class B RVs Handle Crash Tests?

Class Bs handle crash tests the best and must pass them in order to be sold to the general public.

They are the most rigorously tested motorhome and fulfill the most safety requirements of any motorhome on the road.

However, no two RV crashes are created equal. As with any accident, the outcome is decided by many factors, such as speed and the type of collision.

It’s also important to note the average rate of death from motorhome crashes is 26 people per year, compared to the overall rate of automobile deaths of around 37,000 annually.

As always, the best way to protect yourself as a driver is to be alert, use your seat belt, and pay attention to the road.