A Keep is basically a structural component of a boat or ship which looks like a fin which extends at the bottom of a boat on the central line.

A keel of the boat is usually the first component which is constructed while designing a boat. The main purpose of a keel is to offer balance to a ship or boat while it is in the water. These keels are available in different designs as explained below. 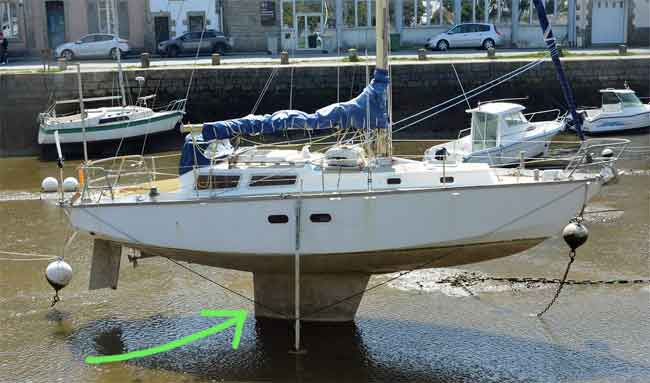 This particular keel by design covers at least half of the boat´s hull. It contains a forward edge which bends upwards while its aft edge usually links to a rudder. This type of keel has a key advantage of providing directional stability as well as safe and strong grounding of the boat or ship.

When referring to safe grounding, the full keel is safer if the boat gets to lie on hardened ground. The full keel offers stable and strong balancing surface for the hull whether the boat is along the coast or while traveling.

While on a travel lift, full keels tend to sling along a prolonged keel line.

Also, a full keel contains a longer waterline distance, this makes it easy to control how water flows more easily as compared to shorter keels. This is a critical feature as it minimizes turbulence which otherwise could have forced the boat to twist.

This type of keel has a length which is less than half of the hull. It is designed with a flat shape which is sharp-pointed at its edge and resembles a shark’s fin. This type of keel is very fast, it contains less wetted surface as compared to full keels, and it also drafts more than the others.

Often, the deeper the fin keel´s draft is, the better it makes a ship or boat sail.

When it comes to speed and racing as well as performance, the fin keel is unbeatable.

This particular keel is often referred to as a shoal draft fin keel. Typically, a deep fin keel is sawn off and then connected with a torpedo-like bulb made from lead material at the bottom of the keel. It is usually shallow.

It is specially designed to be shallow to allow siling or cruising within the Bahamas or the Chesapeake Bay as well as other areas with shoal water holes.

However, this design highly compromises on the boat´s performance capabilities.

If you are having a plan to sail over shoal waters, a bulb keel is the most suitable to use. This type of keel is usually easy and simple to free in case you ground on a soft surface and the boat sinks in. The bulb keel usually does not get stuck or catch muck the same way most other keel designs. It actually pops out from the bottom easily.

The Wing Keel may be used as an alternative when sailing in shoal waters. This does not use one bulb at the bottom of the keel; instead, it makes use of two bulbs which are attached laterally through the lead material wings. The wing could also be made of thick foil comprising of lead material with an exception of the bulbs.

This type is better when it comes to performance as compared to bulb keels since it minimizes tip vortex turbulence while sailing. Its draft is usually smaller. Additionally, since the two bulbs are designed in a manner that they are offsets to each other, there is no chance of interfering with the leading keel edge, this, therefore, prevents the generation of turbulence as it is with the bulb keel.

However, this type of keel is hard to free in case the boat gets stuck into the muck. Their wings usually go deep and grip onto the bottom of the ground, making it difficult to release once it gets stuck.

Some of the advantages of a wing keel include:

On the other hand, its disadvantages include:

These double bilge keel makes a boat to stay upright in case of a dried out low tide.

It comes with a shallower draught as compared to fin keels. This feature makes it appropriate for sailing in shallow waters along the coastlines.

However, this type of keel does not perform as better as the fin keel and are therefore used for sailing instead of racing.

This is yet another alternative which may be used in shoal waters. The centerboard keel contains a base keel which has a dagger that rotates on the downward direction.

This feature is important as it helps to provide the boat with a performance similar to a deep keel and yet offering the maneuverability of the shoal waters.

However, the main disadvantage of the Centerboard keel is maintenance. It is difficult and problematic when it develops mechanical issues.

This type of keel is the most unique when it comes to performance. It is usually connected onto a hinge and as the boat or ship heels, it makes the racers to hydraulically move around the keel to the windward direction.

This process of moving the keel on a different direction from your healing direction makes it possible to create a force which propels the ship forward and positions it in the right direction.

The main challenging possed by this keel is maintenance due to the complex design of the canting keel.

It has a promising future when it comes to racing but it is not recommended too often because of its imperfection.

First, fins and keels are not properly protected from potential external impacts. By their design, they are long components with lever-like arms.

Therefore, if an underwater object was to be stricken, like a sunken piece of log or even the sea bed, the force that would result is likely to be multiplied before being re-transmitted onto the entire boat through a small area.

Therefore, the small surface is likely to encounter excess loads which may result in cracks.

For instance, at the Chesapeake Bay, the majority of the creeks range from 4.5 -5 feet downwards. Boats and small ships which attempts to draft may often get grounded at some point. The moment grounding happens; the force which results and exerts pressure onto the keel is strong enough to generate cracks on the keel or along the hull.

The cracks are only physical indications of the damage caused. For instance, the bolts which are connecting the keel and the hull at the bottom of the bilge may get bathed over bilge water resulting in bolts rusting and getting corroded.

When this happens, the forces together with rusted bolts will most likely result in the keel falling off, this is dangerous and can cause severe accidents.

When the keel is removed or destroyed and the keel bolt develops holes, it allows water to flow into the hull. If the holes remain in that condition for a while, this may cause the boat to sink as a result of the incoming water.

Also, when the keel has been compromised in some way, the ballast or writing surface which helps to counter the sails is eliminated. In this case, if strong wind heels over your boat, it may result in the boat capsizing!

To make it worse, after the ship has capsized, you will not be able to right up since the ballast will not be there. Therefore, when a keel is destroyed it makes the sailing horrible!

Finally, if you want to sail a boat with fin and keel, it is recommended to avoid sailing through shallow waters. In case your boat gets grounded, the underwater appendages may be destroyed and repairing such elements is very expensive and time-consuming.

You should take a fin keel boat or ship as a deep water machine! In deep waters, it glides over and through the water waves efficiently and easily.