Low draft boats are great for people looking to fish in shallow waters, to cruise through back bay channels, and to hit the sand bars. They’re also great for people who can’t access deeper waters.

For this reason, many people have been asking for low-draft boats, and boat manufacturers are responding! 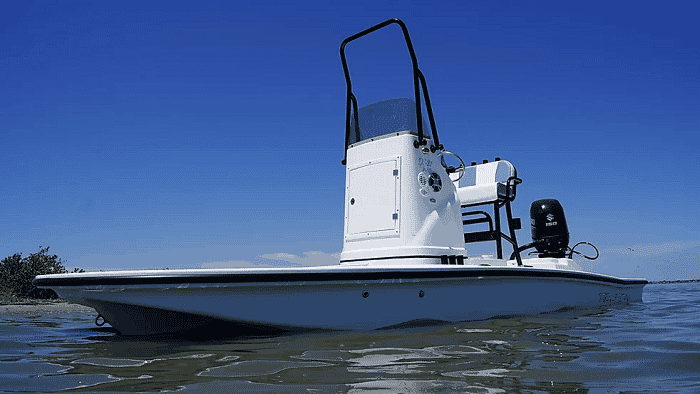 The LX-21 has a draft that sits at only 5 inches deep.

It can cruise through the water almost as easily as a jet ski, and to see it in action is almost surreal.  On top of this, it can retain shallow drafts of 8″ with four adults on top of it.

Tiburon has put this boat’s console right in the center, and a small bench seat stands right behind it.  The bow of the boat has a nice deck on it that would make fishing, crabbing, or even clamming nice and easy.  It would also make a good jump-off point for anybody looking to do some wading or even swimming.

The boat can handle up to a 175HP engine and will go up to speeds of 50 miles per hour with this engine. This is all fueled with a 54-gallon fuel tank.

This boat is 16’7″ long with a beamwidth of 7’3″.  It is made from either fiberglass or Kevlar, with each weighing in at 800 pounds or 700 pounds, respectively.  Not nearly as light as an aluminum boat would be but a lot more durable and capable in shallow waters.

The boat comes with many engine options ranging from 70HP to 140HP.  These engines come from Yamaha, Mercury, E-Tec, or Suzuki.  To fuel the engine, the boat has a 41-gallon fuel tank.  This is pretty large, considering the boat is only 16’7″ long.

The 167 also has a center console with a multitude of rod holders attached to it.  However, the seat is a bench seat that is integrated into the boat, and it seems to sit a bit lower than Tiburon’s bench seat.

You’ll notice that the bow of the boat features a nice spacious deck with a storage area.  There are also storage areas on the sides as well as at the rear of the boat.  This boat was built for fishing in low waters, and it has a draft of only 9″.

Owners of the boat say that the boat is too heavy to pole for long periods of time, but it can handle choppy waters incredibly well for a boat of its size.  They like it because it is stable and easy to catch fish off of.

These boats can range from the $30k to $40k price points, depending on the year and the options you choose. 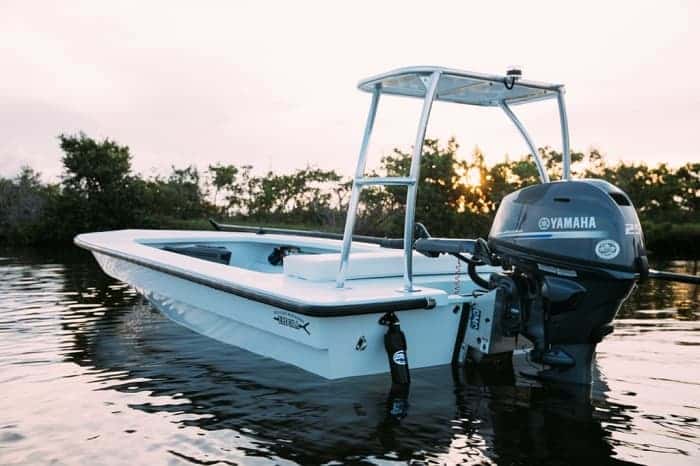 The engine on this boat is a Yamaha 25 Tiller, and it has a 6-gallon removable gas tank.  With its low weight and shallow draft, this boat can be polled through the water quite easily.

It also has a nice standing platform over the engine so you’ll have a nice place to pole, to fish from, and to get a good view.

At the front of the boat, you’ll also find a nice standing platform.  Also, it appears that the storage can be gotten to from underneath the front deck, so you don’t have to worry about opening any hatches from the top to get to your gear.

The boat doesn’t have a console, so you’ll have to sit at the rear with the engine in hand, but the backbench comes with a nice pad.

Underneath of this bench is a lockable compartment for additional storage.

I couldn’t get an exact price from the manufacturer’s website, but these boats appear to be in the neighborhood of just over $30k.

Related Article: 13 Clever Ways to Get a Good Deal on (New) Boats

This boat comes with a 90HP Evinrude engine with a 24-gallon fuel tank.  A plumbed live well comes standard with the boat, and there are recessed push pole holders molded into it.

The boat has a wood grain console as well as a nice cushioned backrest on top of the bench seat.  In fact, the entire boat has a luxury feel to it. The deck looks more like a yacht than a skiff, and I’d almost hate to get it dirty while fishing.

This being said, the boat looks like it would make a good fishing boat for shallow waters.  In fact, it has an ample number of fishing rod holders throughout the boat.

Also, the boat is nice and open, so you’d have plenty of space to move around inside.

Related Article: 9 Tips to Sell Your Boat Quickly (Without Dropping the Price)

The 177 Sport by Scout Boats

The fuel capacity on the 177 is 20 gallons, and the people capacity is five people.  However, I don’t think you’d have a lot of fun with that many people trying to fish on a boat of this size.

This being said, five people could easily go cruising in the 177.

One of the features that first caught my eye when looking at this boat is that not only does it have a two-person bench behind the console, it also has a seat built into the front of the console.

Combine this with the front deck, and I could see how five people could comfortably sit on this boat.

There are 6-rod holders built into the boat and plenty of areas for storage.  You can also add a bimini top to keep the sun off of you as well.

Scout’s website lists the boat brand new at $24,695.00.  This includes the standard engine and trailer.

The Strike by Beavertail Skiffs 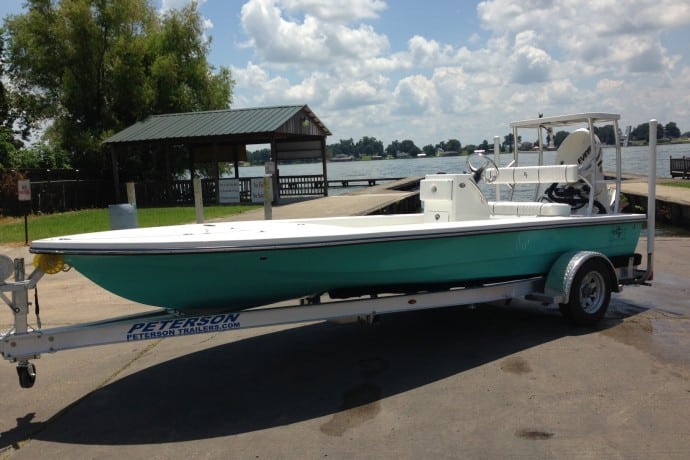 This boat can accommodate an engine of up to 90HP but can be used with an engine as small as 60HP.  It is fueled by a 20-gallon fuel tank, which makes sense for a boat of this size.

The Strike also features a backbench seat with a cushioned backrest as well as a seat in front of the center console. I’d classify its styling as simple yet clean and functional.

As a true skiff, this boat should be easy to pole, and there is a deck at the back to do it from.  There is also plenty of space at the bow of the boat, which should make poling and fishing nice and easy.

Related Article: How Much Do Boats Weigh? 11 Types (Numbers & Pictures)

What Is the Minimum Draft on a Boat

Technically speaking, there isn’t a minimum draft that is required on a boat.  However, I’ve yet to see a boat with a draft under a few inches.

In fact, once you put a person into a boat, even the best of drafts will increase in size.

Also, one has to take into account that a boat will sit deeper into the water, depending on how much weight it has on top of it.  This means that any time you bring friends or even gear along with you, you’ll add to the draft of your boat.

Since fishing with friends is half the fun of boating for most people, it doesn’t always make sense to chase the shallowest drafts.

How Deep Is the Draft on a Pontoon Boat

Pontoon boats all have different drafts depending on how large and how heavy the draft is.  Generally, the larger and heavier the boat, the deeper the draft.

Smaller pontoon boats with small engines can have drafts shallower than 10 inches, while larger boats can easily have drafts higher than 12 inches.

Also, one has to consider that a pontoon boat will have an outboard motor attached to it.  This means that you’ll only be able to go so far into shallow water before having to lift your engine.

Since pontoon boats are hard to pole, this wouldn’t be a great idea.

There are many great boats out on the market right now with low drafts.

You can choose between typical fishing boats to skiffs and even pontoons, so if you’re considering buying a boat for shallow water, you’ll have plenty of options to choose from!