If you’ve been doing research on RV and tiny home electrical systems, you know that they can run both AC and DC power.  You may have also discovered that they do this by using an inverter and a converter.

AC vs DC Explained For RVers

First, we need to understand a few technical aspects.

Then we can move on to explain how the inverters and converters function on our motorhomes and RVs. 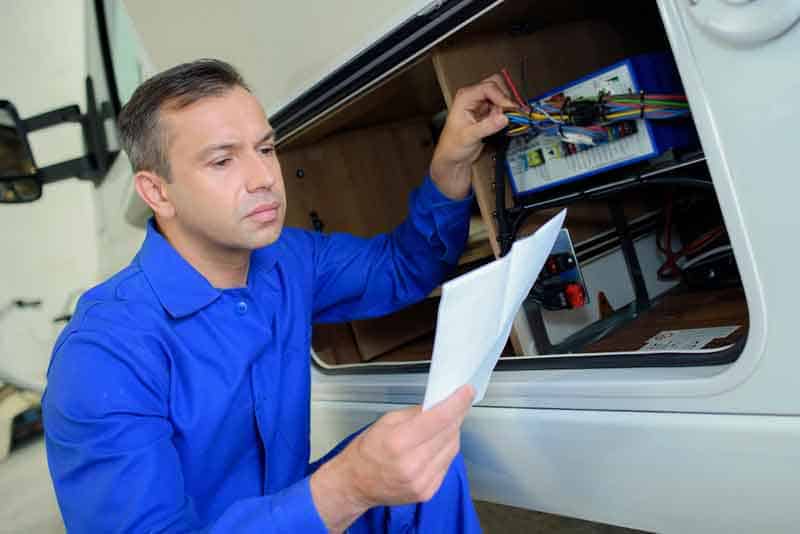 According to Energy.gov, the United States used to run off of DC power but switched its electrical grid to AC power once it was established that the high voltages of AC power could be sent over much longer distances than DC power could.

In recent years, this has changed and DC power can be run over long distances at high voltages, but the AC power grid remains the same.

DC power has traditionally been used in smaller and more portable applications like batteries.

Now let’s get back to talking about RVs.

Since an RV is designed to run off of the electrical grid as well as a 12-volt battery, it uses both AC and DC power.

RV lights are usually 12-volt lights and some of the appliances can run off of 12 volts as well.  Other appliances like microwaves and televisions run off of AC power.

In order for an RVer to use their AC appliances while working from just their battery, they’ll need to use an inverter.  When RV’s are hooked up to the electrical grid at home or at a campground, they need to make use of a converter.

This converter will charge the RV’s battery and the RV will continue to run any DC appliances and lights without losing its charge.

AC power can be dangeruos.  A 12-volt DC battery, on the other hand, is not less dangerous.  Either way, extreme caution should be used when working with electricity.

A converter is used to change AC power to DC power.  RV systems have converters built into them so that you can charge your battery while you’re parked at a campsite that has electricity.

You can find the actual prices here at Amazon.com.

As you can see, the higher performing converter doesn’t cost much more than one that is half as powerful.

An inverter is a type of converter that converts DC power to AC power.  RV systems use inverters to enable the battery to run AC appliances.  An inverter can only convert so many watts at a time so RVers need to choose an inverter that has a high enough watt rating to run everything they want to run at one time.

At this point, you’re probably wondering why people don’t just buy 10,000-watt inverters so they don’t have to worry about power restrictions.  The reason for this is inverters with higher watt ratings also come at a higher cost.

They’re also larger in most cases and weigh more.

Even if you have a 10,000-watt inverter, you may find that your battery does not have enough power to run everything you want to run.  For more information on this, see our page on camper batteries.

Inverters don’t just come in various watt ratings, they also come in different varieties.  There are three types of inverters to choose from.  These are:

The square wave Inverters change the current but they do it abruptly.

This means they change immediately between positive to negative rather than in the smooth and natural way of native AC power.  While a square wave inverter is very inexpensive, it is not very useful to RVers since its power might not even run everything and can even damage AC appliances.

A pure sine wave inverter creates AC power that is the same as native AC power.

These inverters are usually quite expensive but they are worth the price as they will run all of your AC appliances without damaging them.

EDECOA 3,000 Watt Power Inverter – Modified Sine Wave – This inverter is a modified sine wave inverter that can handle up to a 3,000-watt power draw.  It is currently selling for only $225.00.

Power TechOn 1,500 Watt Inverter – Pure Sine Wave – This inverter is a pure sine wave inverter and can handle up to 1,500 watts.  It is currently selling for $250.00.  As you can see, even though it can only handle half of the watts of the modified sine wave inverter, it is actually more expensive.

Power TechOn 1,000 Watt Inverter – Pure Sine Wave – This inverter is a pure sine wave inverter and can handle up to 1,000 watts.  This is currently selling for $170.00.
Lowering the power capacity by 1/3rd lowered the price by about 1/3rd.

Amps also come into play when using an inverter.

This is because inverters are usually only rated for a certain amount of amps and the inverter may have a fuse that will blow if the amp draw is too high.

My recommendation is to buy an inverter that has a higher amp rating and watt rating than you think you’ll ever need.  This way, you won’t ever have to worry about what appliances you can use and when you can use them.

Additional Information on Inverters and Converters

One thing to note when using inverters or converters is that some power is lost through the conversion process.

Because of this, it is always best to use an appliance or light that is built to run directly off of the power source you’re using.

For example, if you have a solar setup and plan to run completely off of DC power, you’d be better off buying a 12-volt television over buying an AC converter to run a standard AC powered television.

Many RVs come standard with modified sinewave converters.  This is fine for the appliances that came with the RV but it might not be great for other electronic devices you bring into your RV.  This is especially true for people who are going to live full-time in their RVs.

Another thought to keep in mind is that a modified sine wave inverter may not hurt your device on the first try.  This means that you could run a humidifier off of your inverter for a month before it ended up ruining it and you’d never suspect it was your RV that did it.

If you’re running a solar powered system, you may not need to buy an inverter or a converter.

This being said, it is wise to add an inverter and converter to your system.

Inverters and converters are an essential part of any well-rounded RV.

These devices allow an RVer to run their lights and appliances regardless of what power source they are using.