Travel trailers can be a whole lot of fun, and truck owners have been using them for years.

But what about people who don’t own trucks? Well, there are some amazing travel trailers out there that are smaller and easy to navigate! 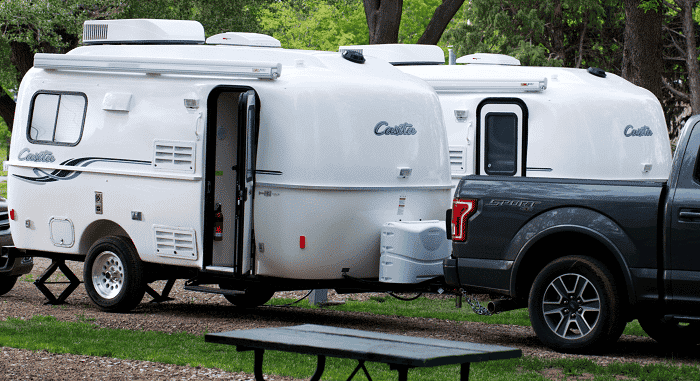 The Casita Spirit is an amazingly light travel trailer that starts out at 16 feet long and weighs in at as little as 1,970 pounds.  Amazingly enough, this travel trailer can also sleep up to six people inside of it.

It isn’t a pop-up camper either.  This camper is a fully enclosed fiberglass eggshell camper that features over six feet of headroom.

Families looking to sleep a lot of people within one small camper will need to opt for the bunkhouse floorplan.  This floorplan has a double bed at the rear, a set of bunks on the driver’s side, and a set of bunks at the front.

The side and rear beds turn into dinettes, and the passenger side features a small kitchen.  Unfortunately, there just isn’t room for a bathroom in this model.

People looking for a small camper with a bathroom can opt for the four-person layout, which exchanges the front set of bunks for a small wet bath and a bit of closet space.

This camper starts out at a price of $17,225.00 and can cost as much as $20,289.00. You’ll pay a bit more upfront when compared to some of the other small travel trailer models, but you’ll save a lot of weight, and you’ll get a great resale value when you sell it. 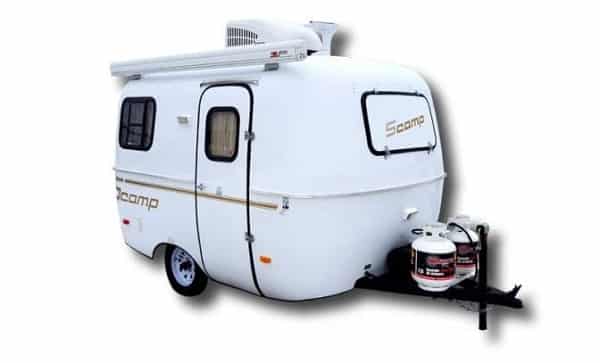 A direct competitor of the Casita is the Scamp.  These campers come in a few different models, but one of their most popular is the Scamp 13.

This camper is only 13′ long, but it still features room for sleeping four people or room for two people and a small bathroom.  It also features a small kitchen as well as a small closet in either model.

One of the best features of this camper is that it only weighs between 1,200 and 1,500 pounds.  This means pretty much anyone with a vehicle should be able to tow it.

In fact, I wouldn’t be surprised if there wasn’t somebody out there towing it with a bike right now.

Even though the camper is short and lightweight, it still offers an interior height of 6’3″.  Also, the sidewalls feature an R-value of R15, which is incredible considering how small and narrow the camper actually is.

These campers are made-to-order, and they don’t list their prices on the website. It’s also nearly impossible to find them used as they sell almost as soon as they hit the market.

My guess, however, is that they sell for right around the price of the Casita fiberglass campers.

Check out our awesome article for 9 Amazing Fifth Wheels Under 30 Feet (With Pictures)! 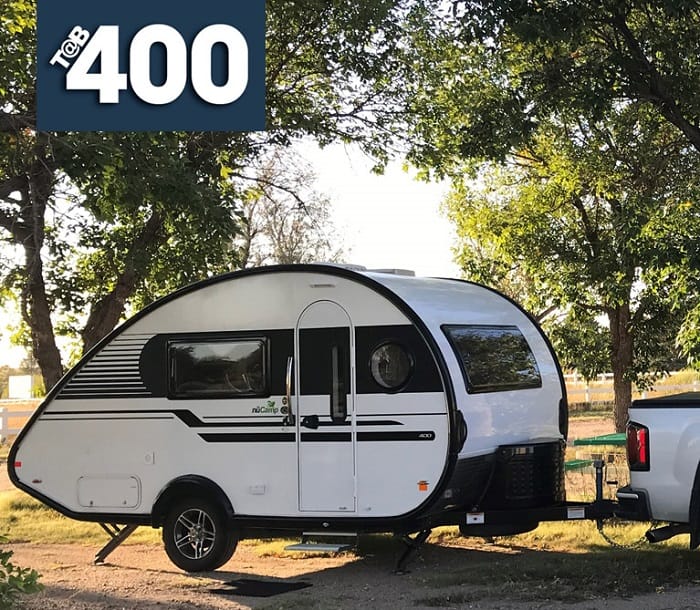 This little camper from the NuCamp company is called 400 and it is an 18-foot camper with a teardrop shape to it.  This allows people to stand in about 70% of the camper.

Presumably, tapering it into the teardrop shape at the back cuts down on the weight of the camper and improves its aerodynamics.  Also, because it tapers overtop of the bed, it doesn’t hurt the functionality of the camper.

The dry weight on this camper is 2,864 pounds, so people looking to keep the weight less than 3,000 pounds will need to watch they don’t fill their tanks too much.

Freshwater capacity is 22 gallons while the gray water tank is 18 gallons, and the black water tank is 12 gallons, so a person could potentially go over their weight limit if they aren’t careful.

As you might have guessed, this camper has a full wet bath.  It also features a nice sitting area and a small kitchen.  A couple or even a couple with a small child could easily spend a nice vacation camping out of this camper.

Is a 40-Foot Motorhome TOO Big? Here are 6 Things to Consider! 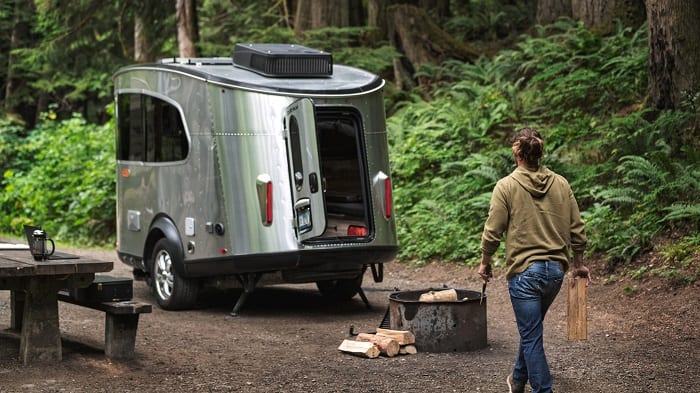 Airstream travel trailers have gotten much heavier since they first hit the market.  However, they still offer a camper with a dry weight that is less than 3,000 pounds.

The Airstream Basecamp is 16 feet long, and it comes in at a dry weight of 2,585 pounds.

It’s fully equipped to handle the camping needs of up to two people but no more than that.  It has a large kitchen at the front of the trailer, a full wet bath on the side, and a dinette that converts into a bed at the rear.

You’ll also find that the water capacities are high for such a small camper.  It has a 22-gallon freshwater tank and a 29-gallon combination black and gray water tank.

One of the nicest features of this camper is the nearly 360 view you can get throughout most of the interior.  There are windows everywhere, and the inside styling is nearly a work of art.

On top of all of this, the Basecamp was built for adventurers.  This camper has a beefy suspension and a set of all-terrain tires to help it get into the backcountry.

As with most Airstreams, you’re going to have to spend more than usual.  Expect prices for the Basecamp to start out in the low $ 30,000.00’s and go up from there.

What RV Sizes Are Allowed in National Parks? Do YOU qualify? 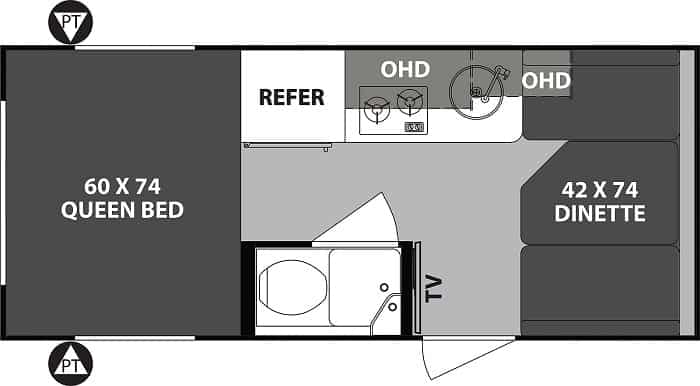 The Forest River R-Pod series of campers are all lightweight, but the RP-171 is the lightest of them all.  It has a length of over 18 feet and a width of 8 feet but still comes in at only 2,504 pounds.

Inside it has even more to offer than most lightweight campers.

It has a queen bed in the rear, a dinette in the front, and a kitchen and wet bath on either side.  The dinette can also be converted into a 42″ wide bed, so there is plenty of room for a family of 3 inside of this camper.

The freshwater, gray water, and black water tanks are all 30 gallons, so you can spend plenty of time off-grid.  Inside the kitchen, there is a small sink, a stove, a fridge, and even a microwave.  The dinette table is detachable, so you could even take it outside on sunny days.

One of the nicest features of this camper is its price.  You can get this camper for around $15,000.00, which is less than half of the price of the previous campers we just mentioned.

How Do RV Parks Measure Length? Check out our Complete Guide (With Examples)!

Another interesting model by Forest River is the Wolf Pup 14CC.  This camper has an exterior length of 19 feet and a dry weight of 2,884 pounds.

The interesting aspect of this camper is that it has a rear entry door.  This splits the entire camper down the middle so that the tub and the toilet are in separate rooms.

Move past the bathroom area, and you have a kitchen on one side and a dinette on the other.  Continue past this, and you have a queen-size bed situated horizontally at the front.

I like that this camper manages to fit a large shower and a large fridge with a separate freezer into a relatively small camper.  A single person or even a very close couple could live reasonably full-time in this camper.

This travel trailer has a freshwater tank of 32 gallons and black and gray water tanks of 23 gallons.  It also features a sink, two-burner stove, and a microwave. 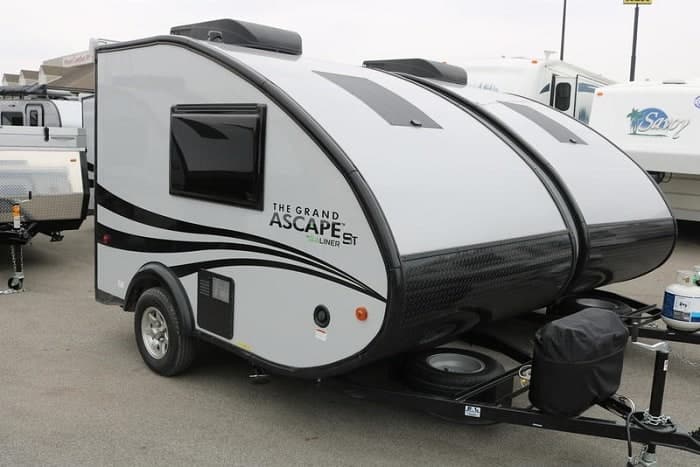 No, that’s not a typo.  Aliner decided to do a play on words and name their trailer the Grand Ascape rather than the Grand Escape.

The camper itself looks as odd as its name does, but that doesn’t stop it from being a neat little travel trailer. It’s only 14′ long, including the tongue, and it only weighs 1,700 pounds.

Nevertheless, they were able to fit a wet bath, a kitchen, a dinette, and a bed into it. It’s even tapered at the front to improve aerodynamics.  The downside to that is that you can’t stand up over the bed.

Other standard options include a 26″ flat screen tv, a microwave, a stove, heating, air conditioning, and a 50-watt solar panel.  There is also an outdoor shower that you can use instead of the indoor one. 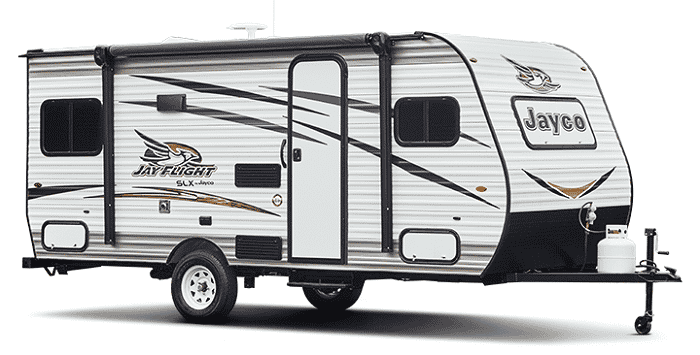 This is the smallest hard side camper that Jayco has to offer. It comes in at 16.5′ long and 2,405 pounds.  It features a small bathroom, kitchen, bench seat, and a dinette that turns into a bed.

One of the best features about this camper is that despite its small size, it still went with a separate toilet and tub.  This is nice as wet baths aren’t for everyone.

The camper has a small freshwater tank of 10 gallons as well as 20-gallon black and gray water tanks.

There are a lot of travel trailer options for people with small tow vehicles.

Just keep in mind that some small vehicles may still need trailer brakes as well as the appropriate towing equipment, and you should be able to find the perfect travel trailer to suit your needs.