When you think about boating, you probably think of it from the point of view of an enthusiast who can’t wait to get out on the water.

Boating is relaxing, providing stunning views of nature that you can’t see from a car or a bike.

However, many of us fail to consider that our activities on a boat may impact the environment, especially with regards to the mechanical aspects of our boats.

Why do boats exhaust into the water?

While all boats produce exhaust, not all boats exhaust into the water. With that being said, the majority of boats do exhaust in the water, which can have long-term negative impacts on the environment.

To be considerate of the impact boating can have on the environment, you may want to consider the boat you have or are going to buy, as well as any ways that you might be able to mitigate exhaust and pollution as a boater and a consumer. 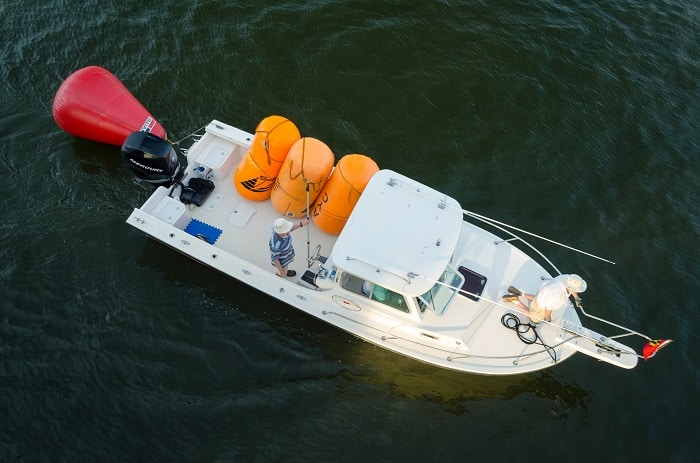 Do All Boat Engine Types Exhaust into the Water?

The short answer is no, and not all boat engine types exhaust directly into the water.

However, all boats with engines do create exhaust and emissions in some manner.

In contrast, dry exhaust engines are most common on performance powerboats, and larger workboats, as well as trawlers and passagemakers, wherein the engine has been specifically designed to allow for the hot exhaust to be forced out into the air.

These inboard engines usually use water for cooling, but it does not combine with the exhaust gas, but simply discharges back into the water.

What Happens when Exhaust Goes Underwater?

A wet exhaust engine is designed to take in seawater to travel through the heat exchanger, gear oil cooler, and if your boat has one, and aftercooler.

This water does not touch the engine directly unless you have a huge mechanical problem.

Instead, it is passed through to the exhaust, along with some of the gaseous output from the engine.

You can sometimes see these fumes when a boat is experiencing exhaust issues, or when you first fire up the engine after a long break.

Two-stroke outboard engines have perhaps the most noticeable exhaust.

Gasoline-powered two-stroke engines require an oil lubricant to be mixed with gasoline, which continuously burns as the engine is running.

Often, the exhaust from these engines will include burnt off oil and gasoline emissions.

On the other hand, four-stroke engines require a separate lubricating oil that is continuously circulated and does not burn out with the exhaust.

Outboard engines will discharge exhaust gases underwater, typically through the propeller, while the exhaust from inboard engines appears just above the waterline, along with the discharge of cooling water.  Also, many inboard engines run on diesel fuel, which is known to have a higher nitrogen content and particulate matter in their emissions and exhaust.

In both cases, this means the particles included in the exhaust will mix in with the water upon which the boat is being operated.

Is this a Problem for the Environment?

Gasoline engines produce more organic compounds, while diesel engines have a higher rate of particulates in their exhaust.

While American passenger automobiles have an average fuel economy of 25 miles per gallon, boats average one mile per gallon.

Since the exhaust is directly related to fuel consumption, that means a boat will exhaust a gallon of these harmful chemicals each mile it travels.

A two-stroke motor will discharge 25-30% of the unburned gas and oil mixture into the water, while a four-stroke motor reduces these figures by about 97%

Are Fish and Sea Life Affected by Boat Exhaust?

Any change in the chemical balance of water will impact the health and well-being of marine wildlife.

The plants and animals that live in both freshwater and seawater environments have evolved to require very specific levels of light, pH, and nutrients.

The chemicals contained in boat exhaust act as toxins, which can kill aquatic wildlife instantly, or cause mutations, cancers, and birth defects after years of exposure.

Lead is another chemical that can negatively impact the environment and sea creatures. Furthermore, in areas that have been specifically studied, such as the Singapore River, heavy metal pollutants have contaminated the sand and dirt under the water.

This, in turn, contaminates the entire body of water, as the current continually moves water over the contaminated sediment.

Some people have reported that fish caught in densely-fished areas have a strange taste that reflects the pollution in the water.

In other areas, it is recommended people do not drink or fish from waters due to the high level of exhaust pollution.

How Much Boat Exhaust Goes into the Ocean Per Year?

According to a study conducted in 2007 by the IMO, around 1.12 billion metric tons of carbon dioxide are released into the oceans each year.

Given that the shipping industry has only increased since then, this number is surely higher today. IMO estimated the total to be 1.48 billion metric tons by 2020.

For reference, that amount is equal to the amount of gas pollution from over 205 million cars.

Additional studies have indicated that areas with higher temperatures and boat traffic may be at very high risk for carbon monoxide poisoning in the water.

The greatest by-product of boating is engine exhaust, which is also the most harmful. While fuel spills and boating accidents can also cause massive destruction through pollution, these incidents are rarer than you may think.

In contrast, boat exhaust is discharged every time the motor is used, which makes regular exhaust pollution far more prevalent in the long run.

What About Large Freight Ships and Exhaust?

This is equal to the emissions of a major carbon-producing country.

Both the shipping industry and the cruise industry continue to grow.

The shipping industry typically experiences a growth rate of about five percent each year, with over 90,000 freight ships responsible for over 90% of world trade.

Meanwhile, cruise ships may make up a small percentage of the vessels floating in the ocean, but they are estimated to use 150 tons of heavy fuel oil per day, which contains high levels of sulfur and particulate metals.

Altogether, cruise ships dump about 15 gallons of chemical waste into the water each day, effectively tripling the carbon footprint of each passenger on board.

Furthermore, large freight ships create a significant amount of oil pollution, which is the main component of ocean pollution and the associated decrease of marine life populations.

These ships also use fossil fuels that are largely untreated and therefore release “dirty” exhaust with higher levels of harmful chemicals.

Can You Avoid Boat Exhaust Getting into the Water?

Unfortunately, there is no effective way to prevent a wet exhaust system from discharging gas, oil, and other potential pollutants into the water.

The emissions of these engines are related to fuel consumption.

While other vehicles, such as cars and trucks, have been engineered to cut back on emissions and become more fuel-efficient, this design technology has not yet been applied as strongly to boats.

The Environmental Protection Agency (EPA) and the International Maritime Organization (IMO) are both dedicated to finding new ways towards reducing boat exhaust by 50% by 2050.

This means a significant increase in studies to understand how boat exhaust impacts marine life and overall water quality.

Lastly, there are important steps each boater can take to ensure their vessel is creating the least possible exhaust, including:

Slowing down your boat means it will use less fuel and create less exhaust in turn.