Yacht clubs can seem intimidating but they don’t have to be. The purpose of a yacht club is to celebrate boaters and the sport of yacht racing, sailing, and cruising.

What Is A Yacht Club?
A yacht club is a social membership sports club for boaters. Yacht clubs are typically located near lakes or the sea with local members that are boat owners or people, leasing or renting boats. There’s a monthly or yearly membership fee.

Here’s everything you need to know about yacht clubs.

1. What is the purpose of a yacht club? 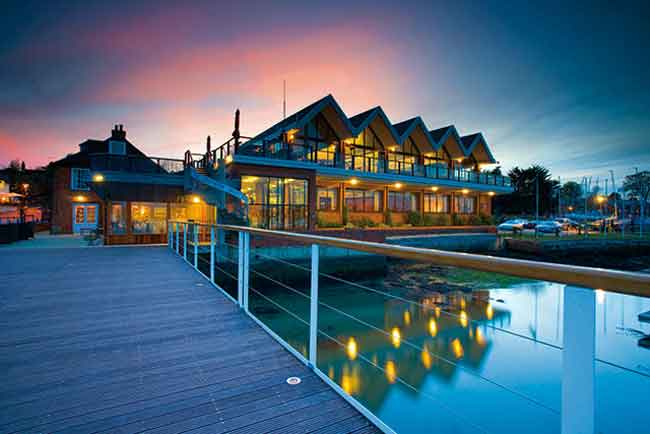 Yacht clubs are a type of sports club which is centered around boating. They are located seaside, but you can find the occasional yacht club near a river or lake, depending on your area. They are normally located in a building on the water, with a section of the water delimited for club activities, normally roped off with buoys.

Clubhouses often have cafes, bars, or a restaurant so members can socialize in an informal setting. At certain clubs, the restaurant can be open to the public for certain hours of the day but are closed during yacht club festivities.

They are generally run and operated by memberships and are used to promote cruising, racing, and socializing for yacht aficionados.

People refer to yacht clubs by their initials.

The New York Yacht Club is colloquially referred to the abbreviation NYYC. Just like that, another name for the Kamini Yacht Club is the KYC. Some yacht clubs have been established under royal patronages, like the Royal Yacht Squadron or the Yacht Club de France.

Some clubs are focused more on memberships (meaning that they have more of a commercial focus). Others provide a service for the community. Others are associated with particular ports or marinas. However, while the objectives might vary, one of the common themes in all yacht clubs is their emphasis on socialization with one another.

Yacht clubs are great ways for you to be able to learn about various yacht expeditions, trips, destinations, and events. If you are planning to go on an adventure on your yacht, a club is a great way to find details for your trip, from experts or veterans who have made many of those trips in the past.

Other yacht enthusiasts and experts like to brag about their adventures. This is a great way to find out about things you may want to try in the future.

In addition to that, there are other, more tangible advantages, such as:

While it isn’t always mandatory to own a yacht, boating and sailing knowledge is a must when joining a yacht club. Some clubs offer yacht rentals (or you can rent a yacht from a marina).

After all, one of the ways that a yacht club can attract new members is by getting in touch with new boaters and with fledgling yacht owners.

If you are interested in joining a yacht club, consider going to yacht racing events and socializing with some of the regular faces there. You may find that they will invite you to their yacht club as a guest.

Most yacht clubs leave it up to the members to figure out what the club’s objectives are when it comes to satisfying membership regulations and attracting other likeminded individuals.

What is a commodore at a yacht club?

Like most clubs or organizations, yacht clubs often have committees, chairmen, directors, and other forms of leadership. However, because of the nautical focus in activities, the chairman or the CEO of the yacht club is known as the Commodore.

4. What is an example of the different roles of officers in yacht clubs?

Yacht clubs are run differently. An example of that is how each officer does things differently depending on what club you are in.

Generally speaking, a breakdown of the roles is as such:

In the United Kingdom, there is also an Admiral, who is ranked above a Commodore. He is the senior officer and makes sure that everything within the club runs smoothly.

Depending on the club, other members of the committee might include the titles of:

5. What is the difference between a marina and a yacht club?

The difference between a yacht club and a marina is the purpose in which it operates. A yacht club is a private club. It is organized and assembled to aid in the support of the sport of sailing/racing. It also supports its members in various ways.

Boaters will dock and house their yachts in Marinas.

The marinas themselves are either privately or publicly owned.

6. What are the best or the top 10 yacht clubs in the world?

There are hundreds of organizations in the United States alone. With as many harbors or seaside towns are in the world, just imagine how many yacht clubs there are on earth.

Each of these clubs has its own target members and specialty. Some clubs specialize in racing. Others in sailing education programs.

Some clubs focus on cruising. While others focus on rentals. Because of the differences, it can be difficult to rate yachts on a “top ten best” list.

Of course, that’s why the Platinum Clubs of America lists exist.

7. What are the top ten Platinum Yacht Clubs in America?

The Platinum Clubs of America chooses clubs based on their recognition and excellence. The people on the committee give the title of “Platinum Club of America” to clubs based in the US, which meet each of the seven criteria:

Based on those criteria, here are the top ten yacht clubs on their list:

8. What are some of the oldest yacht clubs?

The ten oldest yacht clubs are the:

There are some major advantages to joining an organization like a yacht club. The tangible benefits of being a club member include boat slips, access to facilities, discounts on services, etc. In addition, there are social benefits like the sense of community which comes with the club.

It is always best to sail, race, and cruise with experienced, like-minded people. Now, this doesn’t mean that you should sail with a big group all the time. Sailing with a limited crew, out on the open water can be quite relaxing. The sense of community is a great experience that everyone should be exposed to, no matter what their hobby is.

Yacht clubs focus on different things, find the one which best speaks to you on a personal level. Why did you start boating? What do you enjoy about boating? What are you looking for in a yacht club?