This zero-emission RV is the brainchild of two large German companies, and it sparked a market of future electric RVs.

With the market growing and more Eco-friendly motorhomes emerging, a buyer may not know what the best options are for an electric RV.

We here to help.

Below is a list of some electric RVs that are worth checking out: 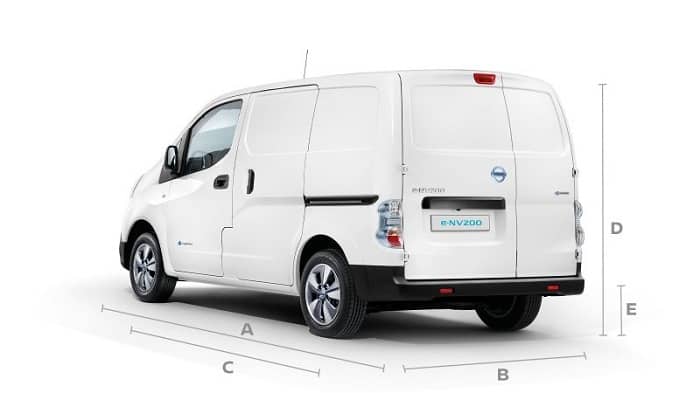 The Current Market for Electric RVs:

Electric vehicles have only recently been emerging, and the demand is increasing, but not at an overwhelming rate.

While the momentum is growing for the demand of these Eco-friendly electric vehicles, analysts anticipate that the number of electric cars will start increasing from 3 million globally to more than 125 million in the next ten years.

With an emphasis on electric cars, unfortunately, electric RVs have taken the back seat and are somewhat rare to find.

This is especially the case because the majority of RV parks already have an existing electric hookup point.

The Electric RVs That Did Not Make It:

Back in 2007, electric-gas concept RVs were on the cards for development.

Both Fleetwood and Winnebago explored the concept with hybrid electric-gas models; unfortunately, the economic collapse and the unstable market response did not see either brand taking their idea to the market.

The Fleetwood hybrid concept RV was built on the ecoFRED diesel-electric hybrid powertrain chassis from Freightliner Custom Chassis Corporation and featured a fuel economy that saved up to 42% to its gasoline counterpart.

The ecoFRED hybrid electric power system seemed more than fitting since it included instant torque on acceleration, and power was not compromised when needed, regardless of the payload capacity.

However, both the Fleetwood and Winnebago models in 2007 remained concept models for electric RVs.

What exactly is the problem with manufacturing electric RVs that not all manufacturers are jumping on board?

Most RV manufacturers do not make their chassis, so they need to turn to the big brand names, such as Mercedes and Ford (the two biggest chassis suppliers for RVs).

Then there is the concern for the average weight of an RV.

Even some of the smallest RVs weigh around 10,000 pounds; that is a lot of battery technology needed to power that weight.

The Electric RVs that Made it to the Market:

Despite concerns for the range that electric RVs can cover, some electric motorhomes have made their way from concept to reality, and they are penetrating the RV market. 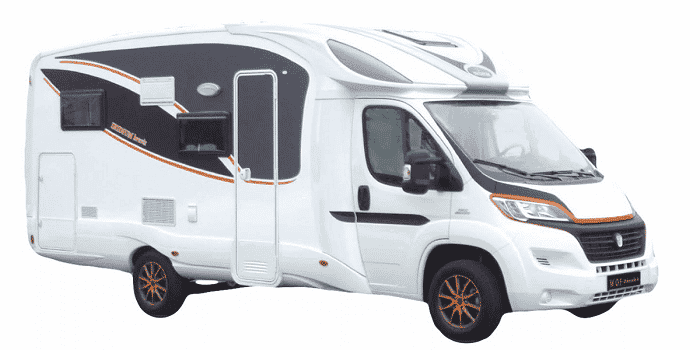 We briefly touched base on this exciting electric RV that was a world-first for hybrid motorhomes.

The main limitation identified from the first model offering 124 miles of travel range was that the most significant setback in electric RVs is the limited range on offer.

The Iridium EV returned with a stronger mile-range and can now offer 249 miles, and this electric RV is quite possibly still the strongest on the market with the highest battery pack on offer.

The layout inside this electric RV may be necessary, but it offers a full-house of amenities including:

The two German companies that produced this electric RV are ElektroFahrzeuge Stuttgart (an electric vehicle retrofitter) and WOF (a motorhome manufacturer).

WOF contributed to the production of the commercial vehicle chassis, and ElektroFahrzeuge Stuttgart provided the drivetrain and the battery technology behind the electric RV.

The electric RV that is most similar to the Iridium EV is the Nissan e-NV200.

This RV offers a reasonably small package, but there is some hidden dynamite in its 124-mile range that it has on offer.

Nissan’s pop-top motorhome is available in two configurations, including:

The small electric motorhome is ideal for a couple traveling short distances, but it has not been upgraded yet to match the size and features of Class A RVs.

This small hybrid has been testing the waters in Spain and Europe with the potential to reach U.S. shores in the future.

Winnebago has risen with the production of an Eco-friendly RV and has manufactured a class A zero-emission RV that is available on their J33SE and J38SE commercial platforms.

However, this cannot be bought as an RV just yet, so there are not current specs and pricing for this vehicle.

This Winnebago motorhome will be 100% battery-electric and deliver approximately 85-125 miles when fully charged.

Winnebago teamed up with Motiv Power Systems (a company that is specialized in developing powertrains for medium-sized vehicles).

Focused on Class A features, Winnebago has placed focus on a “barrier-free interior” so that various options can be included, such as slideouts, alternate entrance doors, air conditioning systems, generators, back-up power systems, leveling systems, wheelchair lifts, cargo doors, and even solar panels.

There are more than 300 Winnebago locations available throughout the United States to service the components of the electric RV.

The best part about this Eco-friendly motorhome is that it still comes with all of Winnebago’s great features and boasts some excellent space for the whole family.

Tesla’s CEO, Elon Musk, stepped in to help Mercedes with their electric Sprinter RV when they first explored the Mercedes eSprinter model.

Unfortunately, the 90-mile range offer by the eSprinter turned it away from being used as an RV but rather as a transport panel-van.

Emerging from the Mercedes eSprinter came to the development of the Mercedes F-Cell, which would solve the problem of adding a more massive mile range to its capacity as an RV.

The Sprinter F-Cell offers approximately 300 miles and shorter refueling time. It also has a considerably low system weight, which makes it ideal as a motorhome.

It was inspired by the best-selling van by Mercedes, the F-Cell features a fuel cell system. The long-range of hydrogen-powered vehicles is what drove Mercedes to the fuel cell feature in this RV.

The versatility of this RV enjoys a combination of fuel cells and battery technology to create the perfect plug-in hybrid motorhome.

This means that this RV can run on electricity.

This could also be the problem behind this electric motorhome. There is limited infrastructure in place for fuel-cell vehicles in the U.S.

There are several hydrogen fuel cell stations that can be found in California; however, these stations are not prevalent throughout the country and may offer limitations to the success of this electric RV.

Some key features of this hybrid motorhome include:

There is a lot of testing that still needs to be done on producing all-electric RVs, but concept RVs are being made for precisely this reason.

The existing electric RVs on the market all had to start from some version of a prototype.

The number of electric RVs that are available in the U.S. at the moment is extremely minimal, with the Winnebago being the only one to take the lead in this Eco-friendly market. It is important to remember that not all of these are on the market yet.

The concept versions of electric RVs are, however, growing and include some of the below concept models:

The Tesla Semi was unveiled in 2018 with the intention of replacing diesel-powered tractor-trailers that move freight.

This electric truck has more than enough power and range to carry a version of a house on its chassis without compromising any of its power.

It makes sense that Tesla would create a concept model for an RV that is based on the Tesla Semi.

What are the specs of the Tesla electric RV concept model?

Converting the Tesla Semi into an RV would require extending the roofline and the length of the existing Semi past the rear axles so that it can accommodate larger living areas.

Side skirts would need to be added over the rear wheels, and tall side sills would also be a requirement to minimize any drag on the RV.

The elements that would remain on the Tesla Semi would be its central driving position, tall entry doors, and digital rearview cameras. 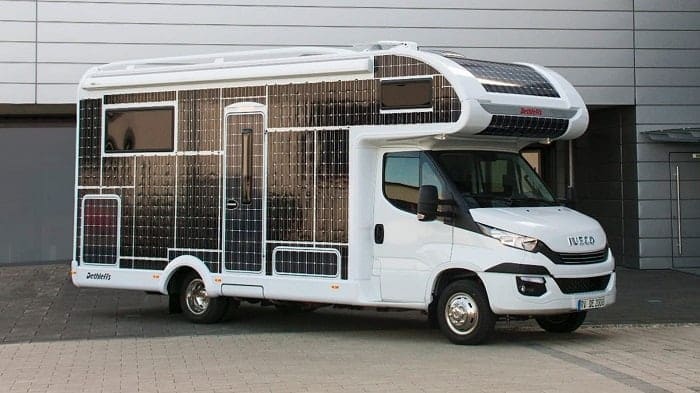 Bridging on something a little different, German RV manufacturer, Dethleffs, has been exploring solar-powered motorhomes.

Dethleffs have unveiled an electric Class C motorhome that is more than just electric; it is completely covered in thin-film solar cells that can be used to top-up the RV’s batteries.

The RV has been built onto an Iveco Daily Electric chassis that offers an 80kW motor as well as 228 Ah battery pack of safe technology sodium-nickel-chloride battery cells.

In its pre-conversion state, this RV can go 174 miles per charge. There is, however, an expected change to this range once the RV is fully kitted out and accessorized. The range may fall as low as 103 miles.

Dubbed as the perfect “slow-travel RV,” this electric RV will be well-suited for short trips with long breaks that will allow for overnight charging.

Despite being slow and having a low-range, the concept model features some unique cabin features, including:

Unfortunately, this RV is still only a concept and may not make it to actual market sales, but it is being used as a prototype to showcase the future of electric motorhomes.

The Future of Electric RVs:

In general, electric RVs are smaller in size, and understandably so because they cannot power a large amount of weight on an electric/ hybrid output.

In addition to the small size of an electric RV, most of them do not carry a small price tag.

RV enthusiasts may find themselves turning a blind eye to the Eco-friendly, zero-emission features of an electric RV and rather opting for a new Class A motorhome that gives them a lot more size, space, and torque for the same price tag.

Ultimately, demand is going to drive the future development of electric RVs, and at the moment, the demand is still fairly low. The current generation of RV enthusiasts wants to show off the biggest RV they can afford.

However, millennials are stepping in and showing a trend that they are more than happy to spend the same amount of money on a smaller RV that has more features.

If the demand increases with younger generations, then RV manufacturers will ideally find a way to make larger electric RVs that can cover more miles under one charge.

Perhaps Volkswagen’s promised electric microbus RV will be the game changer with its offering of 270 miles, fully autonomous mode, and a solar roof that will have RV enthusiasts more than excited.

So, what do Earth-conscious RVers drive in the meantime? Maybe a lightweight travel trailer that is towed by a hybrid pickup truck.

F-CELL: Behind the scenes of fuel cell mobility