Though they are no longer being made, Fisher boats can still be found for sale and on the water, mostly on river sand lakes in the inland USA.

The boats are still around because they were made from aluminum, which is tough and almost indestructible.

But is the brand any good?

Here’s How Good Fisher Boats Are:

Regarded to be a durable, well-made aluminum brand, Fisher boats have been known to be tough, utilitarian boats with few amenities. However, since they have gone out of production in 2009, the lack of new boats leaves owners with only old or used boats to purchase and review. 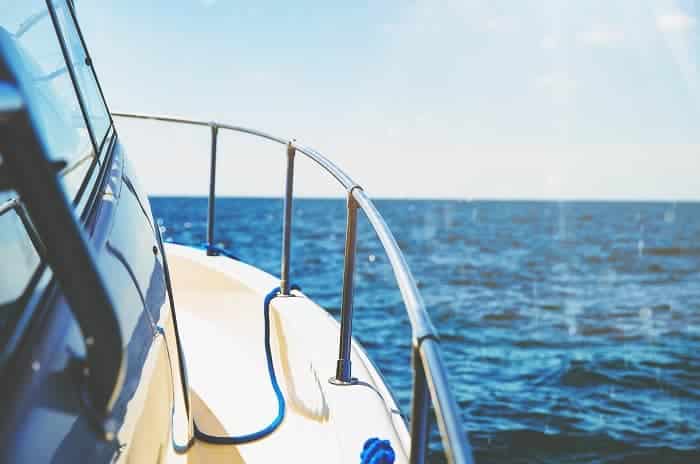 A Brief History of Fisher Boats

Fisher Boats was started by Clifton Miller in 1967. They made boats of welded aluminum.

In 1972 they introduced the Water Strider 15 Deluxe, which quickly became a popular model among inland fishermen.

By 1978, they had expanded their lines to include boats of different lengths and designs, including Modified V-hulls, Deep V-hulls, and pontoon boats. Their line of Freedom pontoon boats, in particular, proved to be successful.

Sometime in 1988 or 1990 – sources differ as to the exact year – Fisher boats was sold to Brunswick Marine Corporation. Brunswick had been acquiring several brands, and they were the largest manufacturer of boats in the world at that time.

Fisher remained an all-aluminum brand. Hard economic times in the mid-1990s affected boat sales, and Fisher went back on the market.

It was acquired by Tracker in June of 1996. Sales in the marine industry went through several cycles, and while Fisher continued to produce boats, their parent company, Tracker, was acquired by the White River Marine Group, which is in turn owned by Bass Pro Shops.

In 2009, with declining boat sales affecting brands all across the industry, Fisher Boats ceased production.

The Fisher brand was one of several that Tracker owned that shut down around that time.

How Reliable Are Fisher Boats?

Fisher made a variety of models, from entry-level to boats for more experienced fishermen or pleasure boaters.

After the acquisition by Tracker, they focused more on being an entry-level brand. For entry-level aluminum boats, their reliability is about what you’d expect—tough boats with few amenities.

The wiring on Fisher boats could sometimes cause some problems. While not widespread, there are reports of shorts and exposed leads in some models.

Most Fisher Boats sold by Bass Pro Shops came with Mercury engines, which are generally regarded as reliable.

How Durable Are Fisher Boats?

Welded aluminum boats are generally seen as being more durable than riveted seams.

Despite that, some problems have been reported with the welds from about 2000 forward.

Aluminum itself is durable, being almost immune to the elements. There are still Fisher Boats from the 1970s around and in one piece, which testifies to their durability.

The construction methods and quality can be the weak points in an aluminum boat.  Their Freedom line of pontoon boats, however, are generally regarded to be durable.

What About Older Fisher Boats?

At this point, all Fisher boats would be considered older models, but you can still break them up into two time periods.

The models from the time period before the acquisition by Tracker would fairly be considered older, and those after the buyout would be considered newer.

While most commenters on forums feel that the newer boats were entry-level and had some problems, most of those who own or owned older Fishers seem to be happy with them.

These older boats are generally regarded to have been manufactured with better attention to quality.

The durability of the older models is usually regarded to be strong.

No parts are being made specifically for Fisher Boats, though there are still parts that were used in them being made.

These can be difficult to find, though, as online searches for Fisher parts lead to mostly dead-ends, such as canvas covers or decals, or parts for Tracker, or replacement parts for non-specific brands.

This is compounded by the scarcity of information online about Fisher boats, such as owner’s manuals.

There are no more dealers, and any information about their old dealer network is gone. Bass Pro owns Tracker, which last produced Fisher, but they offer no information on old Fishers or parts.

While there are evidently no forums that specialize in Fishers, there are some people that have Fishers that frequent forums such as iboats.com have been able to assist with scans of manuals or even find certain parts that other owners need.

There is also one other potential resource for older parts: shops that rebuild or repair pontoon boats. Fisher’s Freedom range of pontoon boats was trendy for decades, and some places that work on pontoon boats may have acquired some data or even parts for old Fishers.

What Are Typical Problems With Fisher Boats?

Before Tracker bought out Fisher in 1996, the boats were entirely made from aluminum.

Afterward, some of the Fisher models were manufactured with wooden floorboards.

A common problem with these particular late models is rotting in the floorboards.

While certainly not endemic to the brand, wooden floorboards on aluminum boats are a serious area of concern for many owners.

A major problem reported by some owners of later Fishers was the failure of some of the welding. The general feeling here is that in the decade or so leading up to the ceasing of production that the quality control at the factory had slipped, and the welders were not as good, or the oversight was not tight.

In the words of one owner, “I had a 2000 fisher and had a weld go on it after 6 years. It made it leak like a sieve and was not cheap to fix. Don’t remember exactly what the model was, but it was a deep V. Besides the busted weld, most everything else on the boat busted at some point.”

Another problem that some models from that time had was leaks from the live well. There quite a few reports of this, before and after the buyout from Tracker.

How Long Do Fisher Boats Last Compared To Similar Brands?

Researching the longevity of Fisher Boats revealed a variety of opinions.

In general, those made before the company was bought out by Tracker were seen as being better-built.

One dissatisfied owner said, “I owned a 2000, 19 1/2′ welded I/O. The third time it went back to the factory (in two years) for a cracked hull, the dealer [repurchased] it from me. That time, not only was the hull cracked and leaking but the starboard stringer was cracked nearly in two.”

This is not to say all later models were bad, as many are still around, on the water, and for sale, but the later models seemed to have been made to a price point and were not as strong or consistent in the construction as earlier models.

As far as comparing their longevity to similar brands, the older models last and Alumacraft or any equivalent from that age, while the newer models seem to compare directly to Tracker.

Do Fisher Boats Hold Their Value?

Given that they are no longer being made, it is difficult to say whether they depreciate faster than normal. But let’s look at a few examples.

The takeaway here is that the Freedom pontoon boats hold their value pretty well, but other models made in the 2000s do not.

Are Fisher Boats Still Being Made?

Fisher boats are no longer being made; they ceased production in 2009.

The Tracker brand, which owned Fisher when they closed their doors, makes boats that are most similar to what Fisher used to produce.

Though they have been out of production for over a decade, there are still a good number of Fisher Boats on the water.

If you are looking to buy one, be aware of what era it was constructed in, and inspect the joints closely.

Some online boating sites have conflated the Fisher Boats aluminum brand from the USA with the Fisher brand of Motor-sailors made in England from the 1970s on.

They are completely unrelated to one another.