They have built a strong reputation, reflected in their numerous industry awards and sustained customer satisfaction.

Here’s How Good Monterey Boats Are:

Monterey Boats make a solid boat in the mid-tier range of motorboats. They have been owned and operated by the same family for over 35 years, and their manufacturing has remained consolidated and consistent. 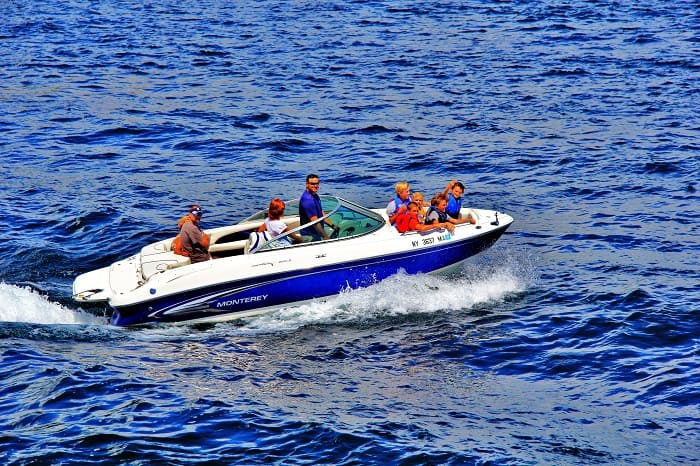 A Brief History of Monterey Boats:

Monterey Boats was founded by Charles and Jeff Marshall in LaCrosse, Florida, in 1985.

Originally, they only had two models of 19-foot runabouts, one of which was a cuddy cabin.

By 1989 they had expanded their lines by introducing their first family cruiser and had opened a second plant in Archer, Florida.

In the 1990s, they broadened their cruising lines and began to manufacture sport boats. This led to their development and introduction of the air-assist chine in 1999.

Interestingly, they were given one free year of rent by the city for every 10 residents they employ. They currently have about a half-century of free lease on the property.

How Reliable Are Monterey Boats?

Monterey Boats are generally considered mid-tier boats; that is, the construction is beyond the cheaper, entry-level boats but not at the highest level of quality.

Beyond the long string of NMMA Consumer Satisfaction awards, they consistently get good reviews of their construction and performance from professional magazines.

They use engines from Volvo Penta and Mercury Marine, which are generally considered to be reliable motors.

Advanced marine electronics are standard on Monterey Boats to keep their customers aware of weather and shoreline information. This includes GPS and phone support through their NAVTEX technology.

Monterey Boats usually get decent reviews from owners on forums, both in terms of the boat’s quality and the dealer’s service.

Non-owners, however, often see the brand as a solid, middle-of-the-road choice, summed up in one quote: “I don’t see any ugly with Monterey, they make a really nice boat at a good price point, not cheap, not the most expensive.”

How Durable Are Monterey Boats?

Monterey Boats advertises its durability as a strength of their brand, and owners on forums back up this sentiment.

They are also a popular choice for many companies that rent or charter boats for fishing or day trips, most often in the American coastal southeast region and in other areas as far as California.

This heavy industry usage speaks to their durability, as most rental boats are used hard.

What About Older Monterey Boats?

Older Monterey Boats have a solid reputation for the most part.

As with all brands, it is not too difficult to find someone on a forum that has had cracks in the gel coat or even the hull on an older boat.

A few owners have has problems with leaks around the hatches.

But these problems do not seem to be endemic for the Monterey brand or on particular models they make and likely are isolated occurrences.

It is more typical to see owners speak highly of their older Monterey Boats, particularly in other brands.

Over the decades, particular models have gone out of production. Because their manufacturing has been in only a few plants and for over 20 years in the same place, some of their out-of-production parts can be easily found.

But much of their legacy information was lost in a fire years ago. It can be hard to get particular parts for older models even when the original manufacturer is still making them.

The best place to start to find an old part is through the dealers’ network. Many long-time dealers acquire a variety of parts over time.

Online retailers for OEM parts seem to have less in stock for Monterey than other brands, but boatoutfitters.com has a small selection.

The best resource for finding replacement parts for older Monterey boats is the Monterey owners’ forum if the dealers are unable to help.

What Are Typical Problems With Monterey Boats?

Being around for over three decades, any manufacturer is bound to draw some complaints.

Forums on the internet are particularly notorious for owners and other lodging problems with all brands. It is often difficult to tell whether a particular problem is endemic to a brand or just the nature of boating itself.

Some owners have related how slow the fueling process is, though they are uncertain whether it is because of the boats’ venting or the EPA standards imposed on boats.

Other owners have related the difficulty in getting information from the company, particularly on legacy boats. Evidently, there was a fire in the plant at one time, and much of the legacy information was lost.

How Long Do Monterey Boats Last Compared To Similar Brands?

Longevity seems to be pretty good on Monterey Boat hulls. The company and most owners speak of the over-built fiberglass construction.

On boating forums, comparisons between similarly-priced brands are fairly common. Monterey usually gets good marks in this regard.

They have uploaded several videos on Youtube, giving a virtual tour of their manufacturing facility and highlighting their construction process.

While the number of used boats available in online listings is less than the more common manufacturers, those available are often older models going back to the 1990s, demonstrating that their construction is long-lasting.

Also, those who have bought used Monterey boats and talk about them on forums usually do so positively, remarking on the strength of the fiberglass construction.

As always, the care an owner has taken of his boat goes a long way to determining the longevity of any given boat.

Do Monterey Boats Hold Their Value?

As far as holding their value, Monterey Boats seem to be about average.

All boats depreciate, but Monterey does not seem to depreciate faster than other brands.

Are Monterey Boats Still Being Made?

Monterey Boats makes a variety of models in their Florida facility.

They also make a line of sport yachts, with comfort and luxury in mind. There are currently two standard boats in this line, the 29-foot 295SY, and the 33’10” 335SY.

Monterey Boats is a solid, reputable mid-range manufacturer that is an obvious choice for a buyer looking to move up from entry-level or down from the more expensive brands and still have a quality boat.

They have remained under the founders’ control for their entire existence, so they have never had the quality control issues that some manufacturers bought and sold do in their operations.

Monterey Has Come A Long Way