Nitro Boats is a brand of affordable fiberglass boats sold for a no-haggle price. The company bills them as being high performance.

It is fair to ask: how good are the boats being made by Nitro Boats?

Here’s how good Nitro Boats are:

Nitro Boats is a staple of Bass Pro Shops’ portfolio of craft. They are very favorably priced compared to most brands. Opinions are split among owners and others in the industry as to how good of a boat Nitro builds. The company is generally seen as a value brand and good for the money. 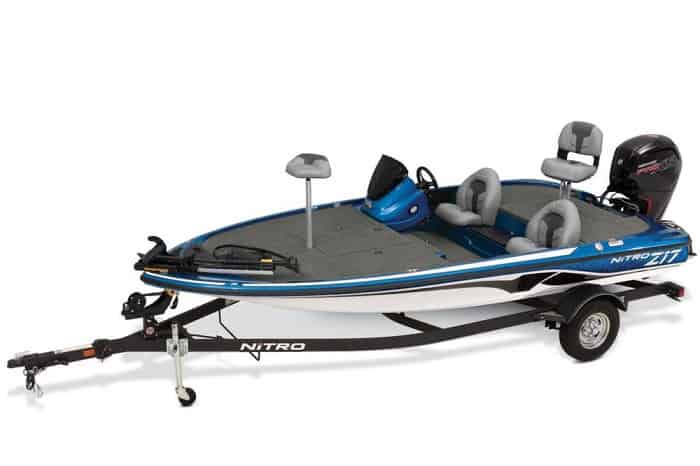 A Brief History of Nitro Boats:

The history of Nitro Boats is poorly documented before their purchase by Tracker Boats in 1989. This section has been pieced together from a variety of sources.

Well-known industry veteran Alan Stinson founded Nitro Boats. Some sources claim Nitro Boats went back to the late 1960s, but it seems more likely that it was started in the mid-to-late 1970s, certainly by 1978.

Stinson had worked for various boat manufacturing companies as a designer and engineer, famous for his work at Stratos, Skeeter, and later Javelin. He began Nitro to build his vision of a quality, high-performance pleasure boat. The early Nitro boats focused on fishing and water skiing manufactured in Longview, Texas.

Nitro grew from a successful regional brand to a much broader section of the United States, though still primarily in the central states. In 1989, Stinson sold Nitro to Tracker Boats, which is under the White River Marine Group umbrella, which is in turn owned by Bass Pro Shops.

They have remained a viable brand within that group ever since, though they have gone through periods of varying quality. Today all of the Nitro boats are made in Clinton, Missouri.

How Reliable Are Nitro Boats?

Nitro Boats is focused on being a competitively priced but solid fishing platform for various fishermen, focusing on bass boats.

Nitro Boats are manufactured with the contemporary Lean Sigma set of principles. These are practiced by a growing number of boat manufacturing companies.

Lean Sigma is a grouping of efficiency practices seeking continual improvement. It is a cultural mindset that identifies waste in materials and labor, reduces waste, and streamlines the manufacturing process by constantly upgrading the methods employed.

This set of principles leads to lower manufacturing costs, and these savings get passed onto the customer.

In addition, Nitro Boats also makes many of their components, such as livewells and fuel tanks, further reducing manufacturing costs, which adds to an efficiently-built boat with a competitive price tag.

Nitro touts their Vortex Technology with their Rapid Planing System for a smooth, fast ride through the water. The ride of Nitro Boats gets mixed reviews. Many commenters feel that the boats do not ride smoothly at higher speeds.

Despite this, many owners are happy with the overall performance and handling, as they are not expecting top-quality performance for the price they pay.

How Durable Are Nitro Boats?

Opinions are pretty sharply divided about Nitro Boats online. While most of the discontent with the brand stems from their manufacturing issues in the 2000s, there are consistent modern complaints.

The bottom line here seems to be that you get what you pay for. Nitro Boats is a cheaper brand, and even with rigid manufacturing principles, the boats are still made to a price point, and you are getting the problems associated with that.

It also seems clear that Nitro Boats is a brand that some online commenters love to dump on. While they certainly earned a spotty reputation at one point, many forum threads online – as they are wont to do – contain excess vitriol toward the brand.

There are many favorable comments from owners online who have had their boats 10 years or more and are not having any problems and appreciate their Nitro, even with minor problems.

“I haven’t had any issues with my Z-8 other than a few small things…the Nitro carpet isn’t as nice as the Ranger carpet by far… For the price difference I think you can’t beat the Nitro for value… The Nitro has a large deck, is very stable and fishes well. The livewells are nice, (a) good amount of storage in the boat. I like my Z-8 a lot.”

Durability-wise, current Nitro Boats are what you would expect for the price. Decently-made boats with few frills, but an occasional lemon gets through the manufacturing process.

What About Older Nitro Boats?

As is clear from the History section above, there have been several phases of Nitro Boats, each with different purposes and principles.

Initially, Nitro made boats for both fishing and skiing. These were made exclusively in fiberglass and had a high-performance focus. They were known for being well-built boats. One owner wrote in 2018:

“I own an 87 Nitro with an 88 Yamaha 115…It is a fish and ski. It is no trailer queen. It has countless hours of skiing, tubing and fishing on it. It has given me no structural problems over the 15 years I have owned it. I am currently repairing some chips in the gel coat on the bottom and planning to re-carpet soon. It tops out between 52 and 54 mph…From what little I know bout it, it is a much more solid boat than some of its later model counterparts.”

After the initial sale to Tracker and Bass Pro Shops, the quality of the boats seems to have still been pretty good, but from the late 1990s until the early 2010s, the brand seems to have experienced a decline in construction standards.

While many online supporters claim that most of this stems from most bass boaters not knowing how to take care of fiberglass boats, there are a lot of documented problems with Nitro Boats during this period.

Most of these problems were hull defects like stress cracks and some delamination cases, but there are also many reports of wiring and hardware issues.

There is an excellent resource for Nitro replacement parts for Nitro Parts. The website nitroboatparts.com has official certification from the company.

The site is not instantaneous; you enter the part you are looking for, and then a specialist will contact you with the availability.

They have success at finding older parts for owners looking for them due to the length of time that Nitro has been around and the extensive inventory built up by Bass Pro Shops.

Older parts, say from before 2000 and definitely before they sold the company in 1989, are out of production and very difficult to find. The best bet for those owners needing a replacement part would be a forum such as nitroowners.com, which sees a lot of traffic.

What Are Typical Problems With Nitro Boats?

One of the biggest and most common complaints online about Nitro Boats concerns stress cracks. Most of these concern boats from before 2013, but it is easy to find more current complaints.

Many go beyond simple gel coat issues and involve the hull structure. It is easy to find pictures online of owners who have experienced longitudinal cracks in their hulls.

Gel coat problems are also very common for more recent vintage boats. Usually, these are spider cracks, but there are many reports of easy chipping.

Other typical current complaints involve hardware such as latches and hinges. Most of these seem to be made from cheaper pot metal, and many are corroding or breaking.

How Long Do Nitro Boats Last Compared To Similar Brands?

Nitro Boats has been around a long time now, so their longevity can be gauged by comparison to other brands over the same time.

Undoubtedly, the pre-Tracker (1989 and before) boats are very durable. Many of these are still on the water today, and their owners are very vocal online.

For the lines of Nitro Boats since then, it is probably fair to say that they, in general, hold up and other value-priced brands. They have been mass-produced to a price point for decades now, and while the process is refined, it still produces cheaper boats.

Almost every brand in this price range produces complaints and occasional praise online concerning how well they hold up. Nitro is a line that many like to dump on, but it is also clear that many of these complainers are not current owners.

Taking it all into account, it seems accurate to say that Nitro Boats last as long as their direct competitors’ boats due.

Do Nitro Boats Hold Their Value?

One of the best resources for investigating this topic, the NADA guides, actually show Nitro models by Tracker gaining value.

But it is clear from online commentary from ex-owners who have sold their boats that this is not the case. Instead, we’ll look at a few models’ current prices on boats.com to get a more realistic view.

Despite their value pricing, it seems that used Nitro Boats, if they are selling for anything close to their advertised price, are holding their value very well.

This was certainly not the case in the mid-2000s when users knew them to lose value very quickly. This is probably due to their value pricing for a fiberglass boat.

Are Nitro Boats Still Being Made?

Nitro Boats are still being made today in a shared facility in Clinton, Missouri.

Anyone know the history of Nitro Boats? – Bass Resource