The flags on a boat can signify many different things.

Mostly, they can seem confusing to a layperson or a new boater.

Flying the wrong flag at the wrong position can confuse other boaters and result in a fine!

Here’s what you need to know about how and when you can use flags on a boat: 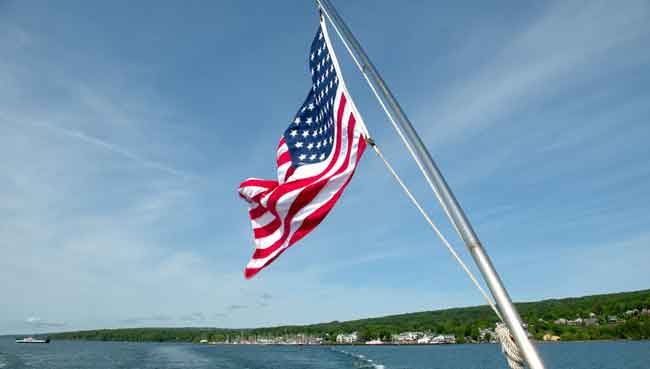 1. What Are The Main Types Of Flags Flown On Boats?

On any non-commercial vessel, you can usually find these four different types of flags:

An ensign is a flag from the nation from which the boater originates.

They are slightly different from their national flags. Ensign flags used to be restricted to documented vessels only.

Now it is common courtesy to fly the national flag on all types of recreational boats.

It is proper etiquette to only fly ensign flags from 0800 to sunset unless you’re in a boat race outside those hours. It is also important to take this flag down before leaving your boat if it is unmanned at sunset.

If you take your boat into international waters, you should fly your national flag. These days ensign flags are flown off of the stern.

If you do this, make sure it is on a staff-pole and that the pole is long and angled.

If you offset it to one side (like the starboard side), it’ll fly clear of the engine’s exhaust.

This will also keep it clear from the rigging.

A burgee flag is a small flag with the skipper’s sailing organization or yacht club on it.

It follows the skipper from boat to boat. These are flown day and night.

Traditionally, sailing vessels hoisted these flags on a “pigstick” at the top of the highest mast.  Because of instruments that are often at the top of the mast, it is more common to hoist a burgee on a spreader halyard.

Of course, this is the modern way to fly it.

The starboard rigging is known as a place of honor (when it comes to flags). That’s why you fly the host country’s flag there when visiting a foreign port.

4. What is a Private Signal, and When Do we use Those?

These are small flags that are custom designed (and custom made) specifically for the boat owner.

It’s flown day and night but is only flown when the owner is in command of the boat.

If a different sailor is in command, they are to fly their own private signal.

Private signals are flown at the aftermost mast’s head (if you have a multi-mast boat). On a sloop, fly private signals on starboard rigging, below the burgee.

Unless you don’t have a burgee, then you can fly it alone.

5. What’s a Courtesy Flag, and When Do I Fly That?

Courtesy flags are flown when you are in a foreign nation’s waters.

It also comes into play when you have someone from a foreign country on your vessel.

You can only fly a courtesy flag if certain conditions are met:

By “proper condition,” you must fly a flag that is not old or in a disrespectful state.

If you do fly a ratty old flag, you could be fined for being disrespectful!

6. What About International Signal Flags?

There is a system of internationally recognized numerical and alphabetical pennants and flags known as the International Code of Signals.

This helps communicate when you’re out in the open water.

The messages these flags send can be about navigation or even safety.

Signals can be sent by:

There are so many different communication methods because it is important when the crew’s safety is concerned—especially when you’re in open water.

Some boaters use signal flags to dress their ships for holidays by hoisting the national ensign at the stern staff first.

A rainbow of flags can then be arranged, reaching from the waterline forward to the aft, from the bowsprit end (or stem).

7. Why are There so Many Boat Flags?

Flags are flown for multiple reasons but remember that when you’re out at sea, this is the easiest way to recognize other boats.

Within each country, different states or provinces can also have different license plates.

Then, you can have symbols that signify clubs or organizations on your license plate in each state.

This is a way you can express yourself on your vessel.

8. Why are Some Flags Flown at Half-Mast?

Just like on land, flags are sometimes flown at half-mast in respect for someone who has passed.

This isn’t required in all places, nor is it mandated by any law.

However, it’s good to note why you might see this when you are out in the water.

Some boaters will also dip their flags (drop it down to half, then raise it again) as a friendly signal to a passing boater.

9. What Size Are Boat Flags?

Generally, boat flags come in different sizes, depending on the type of boat that you have.

For aesthetic purposes, most flags are roughly 1” per foot of the length of your boat.

Also, the staff should be twice the length of the height of your flag.

Fishing flags are signal flags that have representations of various types of fish on them.

Fishing flags should be placed on the port rigger, spaced at least one flag length apart. This will let the proper authorities or other boaters count your catch easily.

It should also be placed in order of size, with the biggest species of fish on top.

Certain rules follow certain types of fish so make sure you read up on the fish flag etiquette in fishing manuals.

In the past, if a fisherman tagged a fish, they would fly the species flag with a white “T” under it to let others know of their tag. If they hoisted the species flags upside down, that signifies that they had caught and released that particular fish.

If they did so with multiple fish of the same species, they hoisted several red triangle pennants under that species flag.

However, today most fishermen are doing the opposite when they practice catch and release. They fly a fish right-side-up to signify that it swam away healthy after being released.

While an upside-down species flag signifies a fish caught and harvested.

The average cost for an ensign flag is roughly $20.

There is a long history of nautical flag use.

Using the wrong flag or flying a flag in the wrong position can get you into trouble. Thus, it is important to brush up on the meanings of different flags before using them.

It is important to have a boat handling book or flag manual on your boat in case of emergency.  The US Power Squadron is a good source for their publication “How to Fly Flags, Nautical Flags Display.”

If you are out with your family and an emergency occurs, they must know how to call and signal for help in different ways: including using a flag signal.

Flags aren’t just important for you and your boat, however.

It is also important to recognize what different flags may mean when you run across other boats.