You might not think about your fun family boating trip as having any real impact on the environment, but you might be wrong.

Do Boats Cause Pollution?
Motor motors pollute by emitting gasses and carbon dioxide and each year a large portion of garbage from boats ends up in the oceans. Larger boats can also cause noise pollution.

Here’s everything you need to know about pollution from boats (and how to prevent it!).

Boating can cause pollution and have a heavy impact the ocean and its environment.

If you plan on operating a watercraft you should know what types of pollution you might be causing and what you can do to lessen your environmental impact. 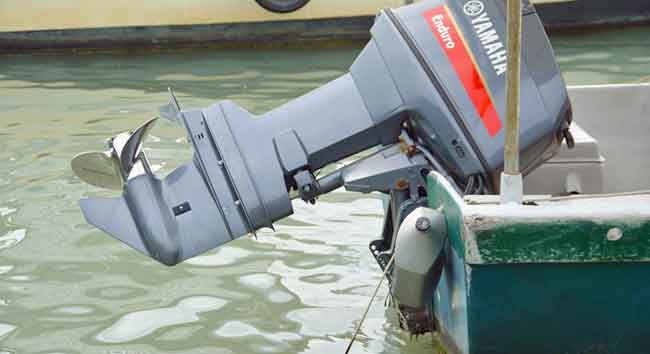 Both recreational and shipping boats cause oil and gas pollution in the water.

Even if you are not leaking oil or gas, you can still be contributing to the oil and gas pollution of the ocean or other bodies of water.

One major cause of oil and gas pollution by recreational vehicles is improper engine maintenance. This can cause engine leaks into the ocean while you are motoring or even if your boat is moored and stationary.

Spills are not the only cause of oil and fuel in the water.

Motors discharge non-burned fuel that ends up in the water. The amount of fuel discharged depends on your motor type.

Old two-stroke engines can emit between 20-30% of their gas that is non-burned into the water.

Other causes of oil spills are caused by oil runoff from under the ground as well as oil spills on land that are washed into the water when it rains.

When large oil tankers or oil pipelines spill into the ocean it usually makes the national news. However, this is not the only way that oil gets into the ocean.

In fact, only 8-12% of the oil in the ocean caused by human activity comes from these types of spills.

These spills tend to get the most attention because of how concentrated the oil spill is.

Steps to Reduce Oil and Fuel in the Water:

If shipping vessels were their own country, they would be the 6th largest carbon dioxide contributing “country”.

This problem is easy to ignore because most emissions are released out to sea. This keeps it out of sight and out of mind of the average consumer.

The only real way to reduce carbon emissions from ships is to upgrade their engines and use the new technology available.

This includes using more environmental fuel sources. Today, most ships use crude and heavy fuel that is toxic and cannot evaporate. This fuel is usually the fuel left over after the standard refinery process.

This fuel is known to be toxic and is bad for marine wildlife as well as seabirds.

Human beings who live near ports can also suffer from exposure of this type of fuel.

Another way to reduce these emissions is to encourage shipping vessels to travel at lessened speeds. This would burn fuel less aggressively. This, however, is not likely to be adopted by large shipping companies because it would increase delivery times.

Recreational boats also emit carbon dioxide into the air, but in much smaller quantities. The only way to combat this is to make sure your engine is running well and you don’t always travel at maximum speed.

Another way to reduce this is to upgrade your engine.

Like the gas and oil issue, having a four-stroke engine can reduce your emissions greatly.

3. Cleaning Solutions and Other Chemicals 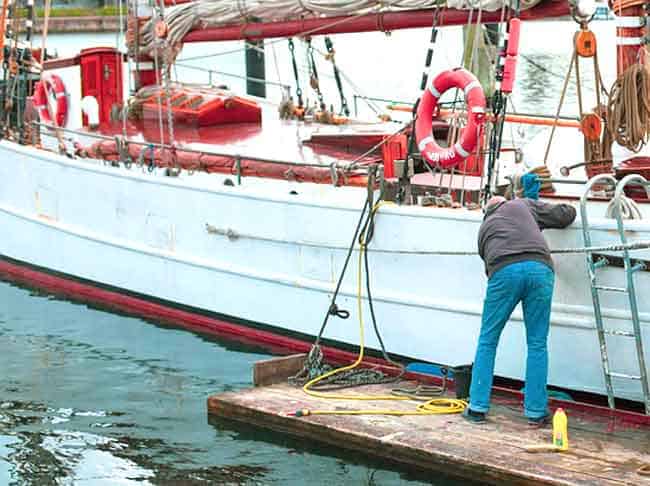 In addition to oil, fuel, and carbon dioxide emissions, most watercrafts also use cleaning solutions and chemicals that pollute the water as well.

A boat is a big investment that most boat owners want to keep in pristine condition. This can involve the use of cleaning supplies and other chemicals.

These cleaning agents and other chemicals can also be major sources of pollution on our water.

The biggest offending cleaning supplies can include:

When purchasing cleaning products you will want to take extra care to know what’s in them.

The best way to tell if your cleaning supplies are safe is to check the label and the ingredients listed.

You will want to avoid anything acidic or that might contain toxic metals.

Most often, a soft sponge with plain freshwater can be effective in cleaning off your boat. Fiberglass does not often attract stubborn buildup.

4. pH Balance To Be Aware Of

Oil, fuel, and chemicals in our water systems are very dangerous to the wildlife that inhabits them.

It is common sense that if an animal is swimming through oil, gas or other chemicals it can be harmful to the animal’s health. However, these are not the only issues that are caused by these types of pollution.

The pH balance of the ocean is becoming more acidic with the introduction of these man made chemicals as well as the increasing levels of carbon dioxide.

Ocean acidification can be harmful to animals that belong to a calcifying species class.

These include oysters, sea urchins, clams, and coral.

Ocean acidification can also cause an overgrowth of algae and sea grasses. Algae can be harmful to an ecosystem because it tends to block the sunlight that is normally streaming into the ocean or body of water.

As with any ecosystem, a change in even a few species of wildlife can cause drastic changes in the entire system and all the species that inhabit it.

Another major pollution of our oceans, lakes, rivers, and other bodies of water is that which comes from human garbage.

One of the major offenders of this type of pollution is plastic.

Plastic can be very harmful to the creatures that live in the water and have been known to suffocate them. This can be because the garbage wraps around the neck of the animal or can even be swallowed by an animal.

Animals often mistake plastic for their food sources. This is an issue for fish, birds, mammals, and other oceanic creatures.

It is possible for birds to mistakenly feed plastic to their babies which can cause them to feel full. Because they feel full they stop eating and can starve to death.

Due to the nature of how whales eat, they have been known to swallow literal pounds of plastic trash.

Recently a whale was discovered dead with 88 pounds of plastic in its stomach.

If this is not heartbreaking enough to cause action to protect our oceans and the wildlife that inhabit it, I do not know what is.

Plastic is used most often because it is inexpensive to make and it is durable.

The major problem with plastic debris is that they are not biodegradable and can stick around in ecosystems for extended periods of time. Most often, instead of breaking down, plastic just breaks into smaller pieces.

There are also issues with metal trash. Pop can rings can be harmful to animals and isn’t biodegradable either.

The ocean actually has garbage patches that collect due to the nature of currents and creates swirling masses of garbage.

Even protected waters have issues with plastics and other trash debris.

6. Noise Pollution Is A Thread To The Fish

One major form of pollution that no one thinks about is noise pollution. On land noise pollution is mostly harmless. It can be distracting or disruptive but will not cause lasting effects.

This is not true for noise pollution in the ocean or other bodies of water.

Noise pollution can be harmful to the fish and other marine life.

Tip
Read our article here with information on how boats can kill fish (or scare them away.) There are some important things to be aware of.

Noise pollution can cut off communication between marine animals. This can cause issues when it comes to them finding food, avoiding predators, mating, and other communications.

Noise pollution can also drive animals to relocate to new habitats that might not have enough food or might contain more predators.

This can be detrimental to the survival of the group.

Noise pollution also causes a loss of senses and negatively affects the animal’s ability to learn. When the animal cannot learn or use its natural senses it becomes more susceptible to predators and other forms of death.

Loud or aggressive noises can also cause disorientation or even death among the animals, especially ocean animals.

Loud noises such as blasts can rupture an animal’s eardrums and even cause internal bleeding and embolisms.

Marine mammals can also be known to panic when exposed to these noises and behave in unsafe ways. This includes surfacing too quickly which can cause a creation of nitrogen bubbles in their blood that can cause decompression sickness or other potentially dangerous health issues.

Confusing sounds can also drive marine animals to shore or shallower water than they should be in. This can cause whales to accidentally become beached which can be very dangerous to their health.

This is also extremely dangerous if there is no one around to help them back into the water.

This form of pollution does not require ocean clean-up and with proper rules and regulations we can greatly reduce this issue.

Another thing to be conscious of is creating large waves or “wakes” in a “no wake” zone.

Constant exposure to unnatural waves can be damaging to the shoreline and the structures constructed on those shorelines. To find other ways to help, you should look at the specifics of your vessel. 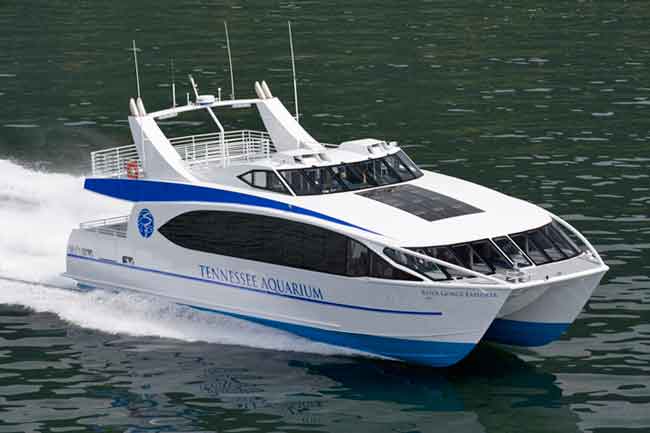 If there is anything that needs tuning up, replacing, or otherwise, make sure that you do that.

You can also look at the specific problems in your area to find ways to help.

Personal accountability is important when trying to combat pollution. If everyone has the opinion that they are just one person or that “one spill” or “one bag” won’t hurt, then we can really find ourselves in a dangerous position.

Make sure that you, and all your passengers on board know how to properly dispose of or how to deal with any trash on board.

The ocean is already polluted, as is our other bodies of water. We should not be adding to the problem but consciously trying to better our waters and their ecosystems. If everyone tried to reduce their environmental impact and helped to clean up what is already dirty, we can restore our oceans to their former conditions.

At the very least, we should make sure we are not contributing to the problem.

The best thing you can do to protect our environment is to do the research, make a commitment to do better, follow through, and spread the word.

Being respectful of nature and its ecosystems can go a long way in the reduction of pollution and ecosystem damage.