Cardboard is all around us. Our packages are shipped to us in cardboard boxes, cereal boxes line supermarket shelves, and shredded cardboard is even used for packaging up fragile orders.

At the end of the day, we have to get rid of some of this cardboard. Where can we go, or what can we do with it that would be eco-friendly?

Is it eco-friendly to burn cardboard?

Burning cardboard is not an eco-friendly option because it can release harmful chemicals into the air, particularly if you are burning colored cardboard that contains more chemicals.

Instead, you should recycle or compost your cardboard. 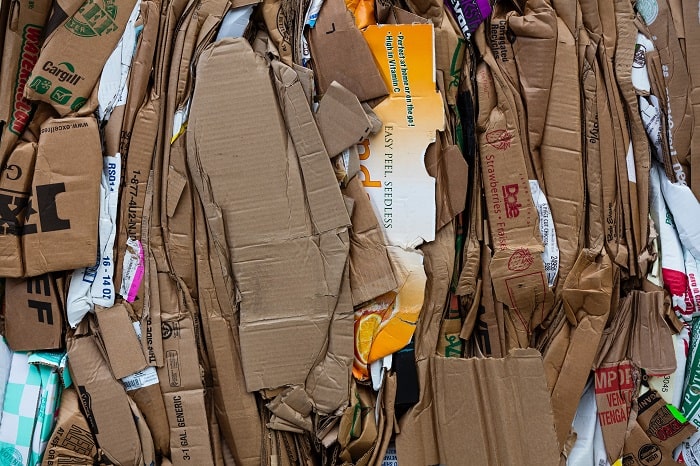 Are Toxins Released When Burning Cardboard?

Because cardboard just feels like a thicker form of paper, many people believe that burning it is an acceptable way to dispose of it.

Unfortunately, experts say that burning cardboard is terrible for the environment. Burning this type of material should be avoided whenever possible. Instead, you should look to recycle it.

Cardboard is often treated with or manufactured with chemicals. When you set fire to the material, these chemicals are burned and release potentially hazardous fumes into the air.

These toxins can prove harmful to your body and respiratory system.

Keep in mind that many cardboard boxes also have some sort of color added to them. Colored cardboard is even worse for the environment because it releases these extra chemicals into the air for you to breathe.

Some companies can incinerate cardboard with trash because it burns at a higher heat and releases the toxins higher up into the atmosphere. This dilutes the harmful toxins before they settle into the air that we typically breathe.

Without this type of setup, it could be bad for the environment and your health to burn cardboard in your fireplace or fire pit at home.

Is it Better to Recycle Than to Burn Cardboard?

Yes, it is better to recycle cardboard instead of burning it in your backyard or fireplace.

Burning it can release toxic chemicals into the air, so it is preferred that you recycle it instead. Of course, you must make sure that the cardboard you recycle is in good shape. Remove any plastic, stickers, or other items that might not be recyclable.

The best thing you can do for your cardboard is to try to keep it dry. Wet cardboard is extremely difficult to work with during the recycling process. Store it somewhere where the elements can’t get to it.

In a similar vein, you also want to try to shield it from food grease whenever possible. This is because food grease contains oil. Cardboard is mixed with water during the recycling process, and water and oil simply do not mix well.

This means that it is more difficult to recycle things like pizza boxes that may be completely stained with grease on the bottom.

If you have a cardboard box that has gotten wet or is extremely stained with grease, you may not want to take it to the recycling bin. Instead, composting might be the best choice.

Can You Compost Cardboard?

Yes, you can compost cardboard if you decide not to recycle it.

Whenever the cardboard is not in good shape to be recycled, this is actually the preferred option.

All types of cardboard can be composted, but wax-coated varieties will take a bit longer to break down than corrugated or plain flat cardboard like that found on cereal boxes.

If you want to compost your cardboard, it is best if you can shred it or break it down into smaller pieces first. Ideally, the pieces should be as small as possible.

Before you add the cardboard to the compost heap, make sure that you only include items that will decompose.

Paper stickers may be fine, but other pieces of plastic or contaminants can prevent it from breaking down properly.

How Long Does it Take for Cardboard to Decompose?

In a normal garden, cardboard is relatively fast to break down.

It is more efficient if you were able to shred the cardboard first or break it down into extremely small pieces.

You can also speed up the process by making sure that the cardboard is wet and stays moist during the decomposition process.

Expect it to take around three months for cardboard to fully decompose.

Can I Burn Cardboard in my Fireplace or Wood Stove?

Cardboard can easily be cut up into pieces small enough to fit into your fireplace or woodstove.

Because it is such dry material, it will quickly go up in flames. Many people wonder whether they can use this cardboard as kindling for their fireplace or wood stove. However, it is advised that you do not burn cardboard in this way.

Besides the fact that burning it releases harmful toxins into the air, burning cardboard can be dangerous. Bits and pieces float in the air while it is burning, which can lead to an out of control fire.

If you do not keep a screen in front of your chimney, burning cardboard can enter your home and singe carpets or start major fires. Alternatively, it can also travel up the flue and make its way to your yard where it can set dry grass or leaves on fire.

There are too many risks to make burning cardboard in your fireplace or woodstove a safe option.

What About Outside in My Backyard or Garden?

If it is dangerous to burn your cardboard inside, it is perhaps even more dangerous outside.

While the toxins will be diluted, and you will have some reprieve from the potential health effects of burning cardboard, the floating pieces will cause even more of an issue.

You must be extremely vigilant to ensure that the burning pieces do not spark a fire on your lawn or in your garden.

Is it Worse to Burn Colorful Cardboard?

Compared to burning traditional brown cardboard, colored cardboard is worse for the environment.

Colored cardboard contains more chemicals that are transformed into toxins in the air when it is burned.

It creates hazardous fumes that should be avoided whenever possible.