After years of dreaming about buying a camper, I happened to inherit a pickup truck.

This opened up a lot of options for me and caused me to start thinking about fifth wheel campers.

These prices are the average prices. The cost of the fifth wheel you buy will depend on:

It will also depend on whether or not you have a truck to pull the fifth wheel camper with.

If you need to buy a truck you can expect to pay much more depending on what type of truck you have.

Additionally, you’ll have to factor the cost of the additional equipment you’ll need to pull a fifth wheel camper into your budget.

The Cost of a NEW Fifth Wheel Camper 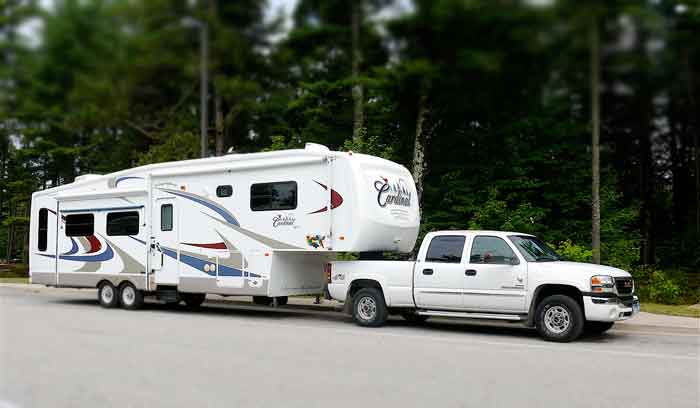 Here are the factors that dictate what a new fifth wheel camper will cost to buy.

The biggest factor here is usually the brand and the build quality of the fifth wheel.  For example, a fiberglass Scamp fifth wheel costs more than it’s wooden competitors because it is lighter and more aerodynamic.

It isn’t just the quality of the exterior that changes the price.  Some fifth wheels have much better interior appliances than others.

For example, you can buy fifth wheels with all stainless steel appliances and faux granite countertops.

These campers are usually more expensive than campers with standard appliances and laminate countertops.

Another factor which will change the cost of a new fifth wheel camper is the size of the camper.

A fifth wheel usually starts out at about 19 feet and can get much larger from there.

All else equal, a larger camper will cost more than a smaller camper.

The size isn’t just determined by length either.  A fifth wheel can have slideouts built into it that gives it additional space even though it isn’t any longer.  One 22 foot camper without a slideout will have less space than a 22-foot camper with two slideouts.

The amenities inside of the camper will also dictate how much you end up having to pay for your new fifth wheel.

Modern amenities aren’t limited to just the interior portion of the camper.  You can buy campers with electric hitches and outdoor lighting systems.  You can even buy fifth wheel campers with the option to add solar panels to the roof.

All of these amenities will add to the price of the camper.

There is definitely a camping season here in the United States.

Summer is the second most expensive and Fall tends to be the least expensive time of year to buy a camper.

The Winter season tends to be a little pricier than the Fall because people sometimes buy campers as Christmas gifts.

Some states have higher taxes and more regulations to deal with.  These states are more expensive to buy a camper in.

Areas without a lot of competition also tend demand higher prices as well.  For example, there are many more RV dealers in Harrisburg Pennsylvania compared to Philadelphia Pennsylvania.  People who buy in Philadelphia will end up paying more than people buying the same camper in Harrisburg.

KEYSTONE COUGAR 368MBI
This camper is 40 feet long and has multiple slide-outs.  It weighs over 11,000 pounds and sleeps up to eight people.

This fifth wheel camper has a wide range of floor plan options and comes at a cost of almost $50,000.00.

KEYSTONE HIDEOUT 281DBS
This camper is 32 feet and it only has one slideout.  It weighs in at 8,231 pounds but still sleeps 10 people.  It is able to accomplish this through the use of double bunks.

The sales price on this fifth wheel is less than $30,000.00.  As you can see, the eight-foot reduction in length and the reduction in slideouts dropped the price of the camper by over $20,000.00.

The Cost of a Used Fifth Wheel Camper

However, there are some additional factors that can change the price of a used fifth wheel camper as well.

A motivated seller will sell his or her fifth wheel camper much cheaper than a non-motivated one.

In fact, you can sometimes find people who are willing to give you their fifth wheel camper for free.

Of course, this is never true for a used fifth wheel camper dealer. Or any fifth wheel in a decent condition.

A dealer is in the business of making money from selling their used RV and they’ll need to make a profit.  Dealers tend to price their fifth wheel campers higher than owners.

A fifth wheel with a roof or floor damage will sell for almost nothing while a fifth wheel in pristine condition can sell for prices close to what they cost when they were new.

This is especially true for vintage fifth wheel campers in mint condition.

In fact, you may even pay more for a used vintage fifth wheel then you would for a new fifth wheel camper.

The Time of Year

I’ve found that camper prices drop dramatically in the Fall.

This is because the campgrounds start to close and people need to decide whether they want to pay to store their camper over the winter or sell the camper before then.

People who haven’t sold their camper by the end of October are usually desperate and typically sell their campers for much less than they would have just a few months prior.

Not only this but fifth wheel campers are often heavy enough that the truck will need to have airbags added to its suspension system.  It may also need a transmission cooler as well as heavy duty brakes added to the truck.

All of these expenses add up and a person can end up spending thousands of dollars in upgrades to their truck so that it can safely pull a fifth wheel camper.

Here is a break-down of some example costs you might expect to pay in order to tow a fifth wheel camper.

There are many different costs associated with owning and operating a fifth wheel camper.

It is important to factor in all of the costs before you buy your camper so that you’ll have enough money in your budget to cover the costs of actually towing the camper after you’ve purchased it.