Figuring out what is needed to tow a camper is confusing and I’ve had to do a lot of research.  Through my research, I’ve learned a lot about typical fifth wheel towing systems and gooseneck towing systems.

Looking up campers and planning out the layouts is a whole lot of fun.

I’ve spent many hours just gazing at photos of fifth wheel campers.  But what about actually towing these campers?

The Difference Is In The Hitch System

These hitches have rails and are mounted right into the frame of the pickup truck.

They do not have a ball attached to them and if you’re new to the world of RVs you might not recognize them as towing equipment upon first glance.

These hitches are mounted just above the rear axle.  A pair of rails is mounted into the truck bed and then the hitch is attached to the rails.

Installing this hitch isn’t overly complicated but it does require you to drill into the bed of your truck and you will need to remove the rear wheel to successfully mount everything that is needed.

The major disadvantage of a fifth wheel camper hitch is that it cannot tow as much as a gooseneck trailer hitch.

If you have a larger trailer or intend on having a very heavy fifth wheel camper built for you then you may need to use a gooseneck trailer hitch instead.

Also, you can’t tow as much weight with a fifth wheel hitch compared to a gooseneck hitch. 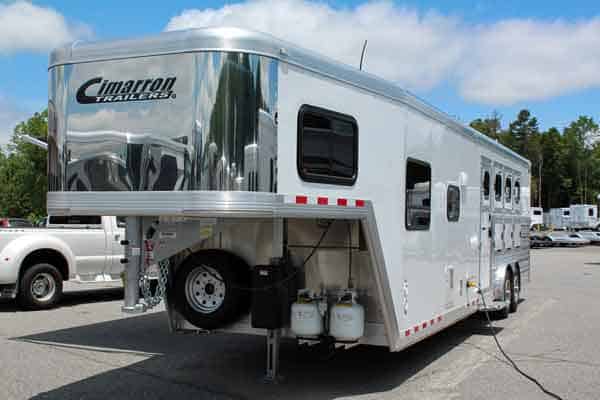 Gooseneck trailer hitches have a ball hitch just like a bumper pull hitch.

These hitches also mount into the truck bed which allows for an overall shorter towing footprint.  It also centers the weight overtop of the truck just like a fifth wheel camper hitch does.

A gooseneck hitch is also installed over top of the rear axle but it does not require any rails.

To mount this hitch, you might need to drill into your truck bed and you’ll often need to remove your spare tire before doing so.

If you have decent DIY skills, a few tools, some extra time and you want to save some money, then feel free to install this hitch yourself.

This being said, I’d recommend that you pay a professional to install this type of hitch.

In the event of a malfunction or accident, you’ll have some protection against liability because you’ll be able to go after the company that installed the hitch.  If you’ve installed the hitch yourself, you’ll only have yourself to blame.

If you want to tow a fifth wheel camper with a gooseneck trailer hitch, you’ll need to get an adapter.

The adapter makes it so that the fifth wheel kingpin and receiver-style hitch can fit and lock onto the ball hitch of the gooseneck trailer.

The drawback to this is that you’ll end up with a ride that is less smooth than either a standard fifth wheel hitch mount or even a standard gooseneck trailer hitch mount.

If you find you have to tow both a fifth wheel and a gooseneck trailer, you may be better off installing a fifth wheel rail to your truck.  ‘

This way you can change out the hitch each time you change trailers.

Fifth wheel hitches and gooseneck hitches are both superior to bumper pull hitches in many ways.

One factor is the turning radius that these types of hitches allow for.

This is especially apparent when backing up.

These hitches make it easier to turn and easier to get into tighter parking spaces.

Jackknifing and other issues you may find with a bumper pull camper usually don’t exist when pulling from a hitch that is mounted inside of the truck.

Here’s a picture of the bumper pull system from my camper trailer. It’s a European mount and it’s much like the standard U.S mount system. 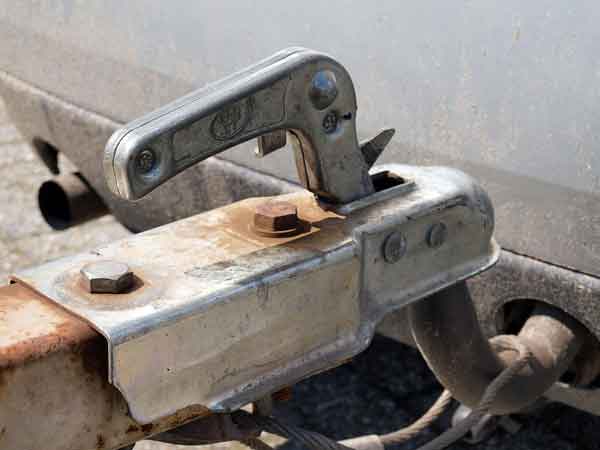 This is especially helpful for people who will be navigating city streets with their campers.

Since both of these trailer hitches place the load within the center of the pickup truck, both types make towing easier than the traditional bumper pull towing systems you find with standard campers.

With a hitch mounted inside of your truck bed, you’ll have less sway and a smoother ride.

The disadvantage to towing from inside of your pickup truck is that you won’t be able to use the bed for additional storage.

Also, if you have a cap over the top of your truck bed, you’ll need to remove it before you can tow anything.  This cap will then need to be stored and you may have trouble selling it when you put it back on.

I have a truck cap on my camper and it has leaked ever since I removed and then reattached it and many truck owners have shared similar stories with me.

Even though fifth wheel camper hitches and gooseneck trailer hitches share many similarities, the two types are different and you’ll find advantages and disadvantages for both of them.

Can I tow more with a fifth wheel camper?

Yes. You can tow more weight with a fifth wheel camper than you can with a travel trailer.

There are two reasons for this.

Another thought to keep in mind is that you can tow a longer camper as well.

This is because some of the campers are centered over the top of the truck and you do not have to worry about the additional length of a trailer tongue.

Since you’ll have a shorter footprint, you may be able to park in places that were previously inaccessible with your bumper pull camper.

Doing so will give you a smoother and more controlled ride and you won’t have to make use of any adapters.  You’ll pay a little more for the hitch but it will be worth it.

If you have to tow more weight than a fifth wheel camper hitch will allow, go ahead and switch over to a gooseneck trailer hitch.