Cartography and ship making are ancient practices adapted to modern technologies and materials for over a century.

We better understand how to float large ships that can carry massive vehicles, cargo, and other important objects because of decades and decades of research.

How they float and why we use them is very important.

Buoyancy, also known as upthrust, is the upward force that makes giant boats float. This upward force is created by the density of water that acts against the downward force of gravity. Density is the measure of an object’s size (or mass), in our case, a ship, compared to its volume.

In this article, we will discuss how floatation works and why large ships are no exception to the rule: 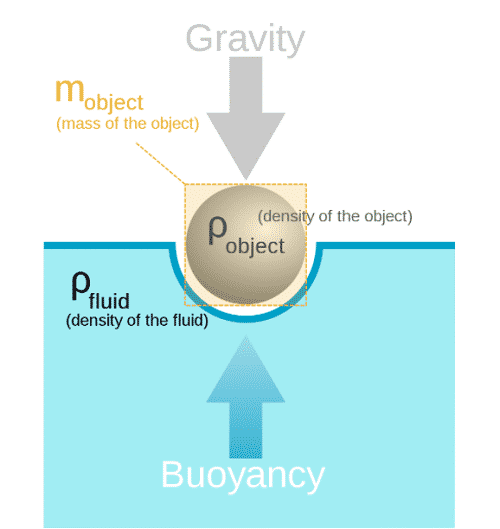 Why Can Huge Metal Boats Float?

We all know that huge metal boats can float.

However, if you try to float a small metal object like a nail or a coin, it will sink.

So how is it possible that huge metal boats, weighing hundreds of thousands of tonnes, can float?

To explain this, we have to go back in time to ancient Greece and a very clever mathematician and inventor known as Archimedes.

The one we are interested in is a book called ‘On Floating Bodies’. This book covers the principles of flotation, which he wrote as long ago as 250BC!

This significant book contains the theory, which later became known as the Archimedes Principle.

The Archimedes Principle states that ‘any body wholly or partially immersed in a fluid will experience an upward force equal to the weight of the fluid displaced.’

Basically, it means that the force exerted on a boat in the water is equal to the weight of the water displaced (moved out of the way) by the boat. This force is called buoyancy. The buoyancy pushes upwards against the boat.

In addition, gravity exerts a downward force on the boat (its weight), determined by the boat’s mass. So for a boat to float, the force exerted downward on the object by gravity must be less than the buoyant force pushing upwards.

Huge metal boats float when their density (defined as mass per unit of volume) is less than that of the displaced water.

However, this still does not explain why huge metal boats weighing hundreds of thousands of tonnes float. In shipping, most large boats are built of steel, which has a higher density than water, so you would think that they would sink.

But ships are not built from solid lumps of metal. Instead, they are hollow, which means they contain air, and the air is much lighter than water which helps them float.

In addition, the shape of the boat or ship is essential. For large ships, a flat but deep bottom is best, with sides to keep out the water and with a large surface area that touches the water – think of a boat like a box.

The larger the surface area of the boat, the more water it displaces. As long as the boat carries a lighter load than the weight of the water it has displaced, it will float.

The tallest cruise ships can reach a height of 238 feet or 72 meters, higher than a 20 story building.

So, why don’t really tall cruise ships tip over?

Can Boats Get So Big That They Cannot Float?

Nowadays, all big cargo and cruise ships have an internationally agreed-upon reference line marking the loading limit for cargo ships.

This line is called a Plimsoll Line.

The Plimsoll Line, also known as an international load line, is a reference mark located on a ship’s hull. It consists of a circle with a horizontal line, which indicates the maximum depth to which the vessel may safely sink when it is loaded with cargo.

This depth varies with a ship’s dimensions, type of cargo, time of year, and the water densities encountered in port and sea.

The shape of a boat’s hull can help a boat displace more water, affecting a boat’s stability.

For example, deeper hulls can create more stability, but shallower ones may carry more weight.

In addition, smaller boats are lighter, which means they are less stable. On a large ship, like a cruise ship or cargo boat, the movement of one person does not affect the stability of the ship.

Bigger boats are designed to carry lots of people and lots of weight safely.

However, on a small boat, like a fishing boat or sailing dinghy, your weight and the weight of your gear (and where you place your gear) will affect the boat’s stability.

How Big Are The Biggest Boats?

In recent years, mega-ships have become the norm for carrying cargo.

These mega-ships have increased average ship sizes in size, length, and capacity and are now very common. Today, some of the largest ships in the world are in the form of oil tankers, cargo carriers, and cruise ships.

These ships are considered engineering milestones and help transport the world’s goods, commodities, and passengers.

The biggest boats can be more than a thousand feet or more than three hundred meters long.

For example, the largest cruise ship in the world can be found in the Caribbean and is named Symphony of the Seas. The length of this ship is mind-boggling 362.1 meters, and it has a displacement of 227,625 tonnes.

This ship can carry a maximum of 6,780 passengers, plus all the crew to take care of them – no wonder they are also known as floating cities!

Ships and Boats – Explain That Stuff