These catamarans are known to be spacious, comfortable, and performance-driven bluewater cruising catamarans. In addition, Leopard catamarans are the only catamaran brand certified in Europe (CE certification) and the US (NMMA Certified).

These South African-built boats have a reputation for being robust enough for ocean crossings, extremely spacious, easy to handle, and expensive.

Here’s Why Leopard Catamarans Are Worth Their High Price:

Leopard Catamarans are worth their high price because they are extremely well-built with high-quality finishes. Initially designed for the charter market, they became so popular that the company expanded into the private market offering a choice of layouts and semi-custom options. 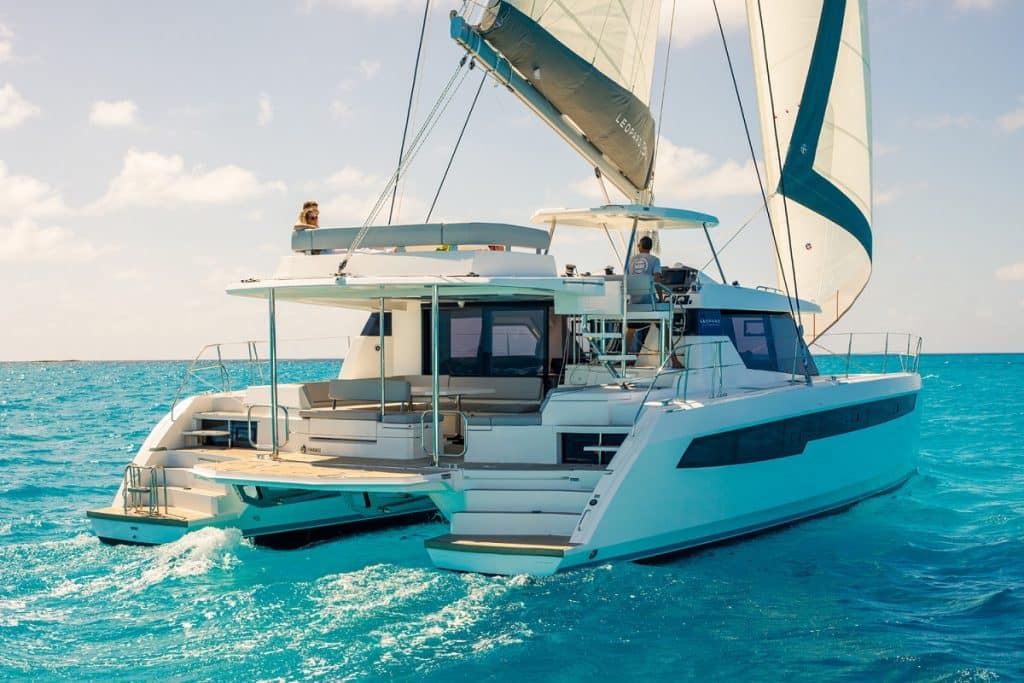 A Brief History Of Leopard Catamarans:

By 1994, as the company became known, Robertson and Caine were approached by the leading global yacht charter company, The Moorings, to produce specifically designed, spacious catamarans for its charter fleet.

The company successfully delivered 100 new catamarans to The Moorings in less than 4 years!

Plus, they sailed every catamaran from Cape Town to various charter destinations worldwide, proving their robust design and blue water capabilities.

Six years later, Robertson and Caine started to manufacture catamarans for the private market, and in 2020 the brand Leopard Catamarans was introduced. Sailors worldwide were impressed with this new line of catamarans. The custom ‘owner’ versions became very popular for private use, with owners able to choose their layout, plus any optional equipment and even their delivery location.

How Much Exactly Do Leopard Catamarans Cost?

However, second-hand catamarans are available if you can’t afford a new model. A quick search on Yachtworld.com came up with a Leopard 38 from 1999 that is on the market for $198,000. Plus, Leopard Catamarans themselves have a yacht brokerage for their second-hand models. At the time of writing, prices there start from $219,900.

In general, 85% of all Leopard Catamarans go into the charter market for their first 5 years. Charter companies prefer the 4 cabins with 4 heads version because they generate more income than the owner’s version, which only has 3 cabins.

The new market for most boats is the 4 cabin version.

The second-hand market for Leopard Catamarans generally prefers the owner versions because they normally have had less use and are in demand by live-aboard cruisers. As fewer of these owner versions are around, they tend to go for higher prices.

Similar brands of catamarans include Lagoon, Fountaine Pajot, Nautitech, and Catana. The prices of new catamarans are not widely available and will come down to the layout, the basic boat package, and any added-on options.

However, we can make a price comparison of similar second-hand models from the same or similar years.

At first glance, the Leopard Catamaran is not the most expensive, but it is the cheapest. As for value, you would have to take a more in-depth look at the inventory and the boat’s overall condition to get a better idea of whether these boats are good value for money.

In addition, if you are buying a second-hand catamaran, or indeed any boat, it is always recommended to have an independent marine survey carried out to identify any unseen problems.

Why Do People Choose Leopard Over The Competition?

The following are reasons why people choose Leopard over other catamaran brands:

The value of a catamaran largely depends on how well the boat has been maintained and looked after. However, catamarans tend to hold their value well, particularly Leopard Catamarans.

This can be attributed to the availability of new catamarans being fairly limited as there are not so many catamaran manufacturers around. Most manufacturers have full order books and waiting lists for their boats, which keeps the resale value of catamarans much higher than monohulls or other yachts.

Each year the price of new catamarans tends to increase more quickly than the equivalent monohull. So this also helps to keep the value on second-hand catamarans.

In addition, roughly 85% of Leopard Catamarans are built for the charter market. While some people may be averse to buying an ex-charter boat, they tend to be of great value as they have been professionally serviced and maintained throughout their charter life.

If a Leopard Catamaran has been well looked after, it will keep its value and will possibly be better than other brands.

What Are Typical Alternatives To Leopard Boats?

While you might be in the market for a Leopard Catamaran, there are good alternatives to consider:

Lagoon Catamarans are one of the main alternatives to Leopard Boats.

The French company has been building sailing and power catamarans since 1984 and has produced more than 5,800 multihulls.

Today the company still offers both sailing and luxury power cats from 40 to 78 feet.

Fountaine Pajot is another famous French boat builder who was founded in 1976.

They launched their first cruising sailing catamaran back in 1983 and began with their line of luxury power catamarans in 1998.

Today Fountaine Pajot offers a range of sailing and power catamarans ranging in size from 36 to 67 feet.

Catana Catamarans is an additional French catamaran manufacturer on a much smaller scale than the previous two brands.

Catana has been a leader in producing high-performance catamarans since 1984. Over the years, they have built catamarans ranging in size from 42 to 70 feet.

As a smaller boatyard, they offer personalized services, and each new boat is designed in close collaboration with its future owner.

Nautitech Catamarans, also based in France, build around 80 catamarans annually.

Again, they are not one of the big-volume French manufacturers like Lagoon or Fountaine Pajot. Instead, Nautitech has positioned itself as a manufacturer concentrating on quality over quantity.

Today they offer a range of sailing catamarans from 40 to 46 feet and a 47-foot power catamaran. They have a reputation for building performance catamarans that combine comfort in their boats.

While all of the above are French catamaran builders, there are catamaran manufacturers based in the UK, the USA, and Australia. These other, mainly smaller boat builders offer high-performance catamarans that are not an alternative to a comfortable, robust cruising catamaran like a Leopard.

Do You Pay Full Price, Or Do Dealers Offer Discounts?

It’s a seller’s market for catamarans, with manufacturers having full-order books for the next 2 years. Most dealers have waiting lists of clients for catamarans, and Leopard is no different.

To get a discount, you may be able to negotiate with a dealer at a boat show, or the dealer may be able to offer discounts on any additional equipment or upgrades you might want to order.

However, don’t expect huge discounts as the dealers have little room to maneuver their prices. And with catamarans in such high demand, why should they offer discounts?

If you are looking for a great deal, you should take the time to look at the second-hand market. You might find a Leopard catamaran that is only a couple of years old with many upgrades and for a good price.