If you’ve ever driven on a long highway you’ve probably seen truckers pulling off onto weigh stations.  Some motorhomes are built to look more like cars and most people assume that they wouldn’t have to have them weighed at a weigh station.

Which Motorhomes Must Stop At Weigh Stations? (6 examples) 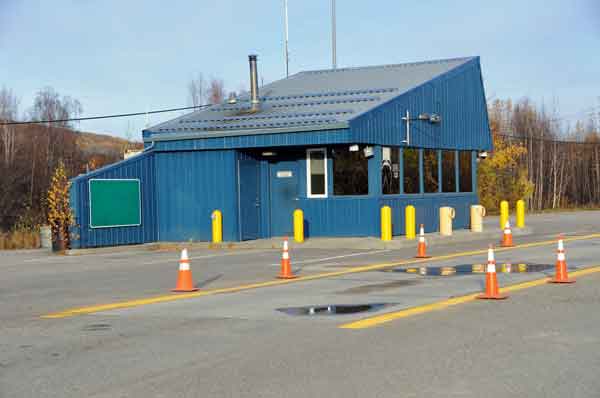 Here are some examples of motorhomes that weigh over 10,000 pounds.

Some large class C and class B motorhomes can be large without all the added weight.  These vehicles were designed to be lighter to save on gas mileage.  An added bonus to this is they also will not have to be weighed at weigh stations.

Here are some examples to consider:

The Freelander 20CB Ford Transit – This class C motorhome has a gross weight of 10360 pounds, but its dry weight is only 7,824 pounds.  Although it is 24 feet long, 7’7″ wide and 10’6″ tall, it does not have any slides.  Slide-outs can add several thousand pounds to a motorhome.

How Do I Find Out How Much My Motorhome Weighs

In most cases, your motorhome will tell you how much it weighs.  If you know the base weight of the vehicle, you can just weigh the items you’ll be bringing along with you and do some addition.  Don’t forget the weight of the passengers too.  A 9,500-pound motorhome may end up over 10,000 pounds with four passengers loaded inside of it.

If your motorhome does not provide any weight information, you can always visit a CAT scale at a truck stop.  You’ll have to pay a fee to use this type of scale, but it’s usually less than $20.00 and sometimes less than $10.00.  For more information on how to use a CAT scale, you can go to their website at catscale.com/how-to-weigh/  This page has specific instructions on how to use the scale with a motorhome, a motorhome with a tow vehicle, and a tow vehicle with a camper.

How to Make Your Motorhome Lighter

Some motorhomes will have a dry weight that is less than 10,000 pounds and a gross weight that is over 10,000 pounds.  If you’re trying to avoid having to stop at weigh stations, you may want to keep your tanks empty until you’ve reached your destination.

This is also a good reason why you should empty your black and grey water tanks before you head off. We also wrote a guide on how to use Dump Stations, that’s where you can dump your wastewater.

Even a heavily loaded cooler may be the difference between you having to get weighed or not. Check your route to see which states require you to get weighed and buy your ice and fill your fresh water tanks once you’ve passed through them.

Why Do Vehicles Need to Stop at Weigh Stations

There are a couple of reasons why the government wants heavy vehicles to stop at weigh stations.

The first reason is for safety.  Some highways have weight limitations.  These roads can only handle a certain amount of weight before breaking down.

Vehicles with too much weight in them may also become unsafe to drive.

Weigh stations will sometimes check the weight of the vehicle versus the gross vehicle weight that the vehicle is rated to hold.  If the vehicle exceeds this weight, they’ll make them remove some of it before heading back out on the road.

Another reason is so that the government can make more money.  It costs a lot of money to build, repair, and maintain the roads and heavy vehicles do more damage to the roads than lighter ones.  Some states tax trucks based on their weight.  Forcing these trucks to stop and get weighed ensures that the government charges the correct amount in taxes.

Which States Force Motorhome Owners to Stop at Weigh Stations

Unfortunately, the laws are somewhat vague as to whether or not they apply to motorhomes and campers.

Here is a brief synopsis on each state for you to review:

You can find additional weigh station information for every state on AAA’s website.

As you can see, the laws in each state are not always written very clearly.  In my experience, most people do not bother stopping and I’ve never actually heard from anyone who was punished for not stopping at a weigh station while driving their motorhome.

Fortunately, I’ve never heard a story from anyone who was punished for stopping at a weigh station.  If you’re in doubt, you can always stop and ask.  You may end up looking foolish, but at least you’ll know you haven’t broken any laws or subjected yourself to any fines.

When Would I Need to Stop at a Weigh Station?

You’ll need to stop at a weigh station anytime you pass one that is open.  If the weigh station is closed, you’re free to keep going without stopping.

Sometimes you may be weighed without ever having to stop at the weigh station.  You’ll know this is happening because there will be signs telling you to get over to the correct lane to be weighed.  If you end up weighing more than 10,000 pounds and you do not stop at the next station, the weigh station will know.  They’ll have a picture of your license plate and may even have a picture of you in the driver’s seat.

Where Would I Find a Weigh Station?

Commercial weigh stations can be found at truck stops.  They’ll let you weigh your motorhome or camper, but they’ll charge you a small fee for doing so.

How Can I Avoid Stopping At a Weigh Station?

There are a couple of ways to avoid stopping at a weigh station.

One way to avoid weigh stations is to just not drive by them.  If you know where the weigh-station is along your route, you can try to avoid them.

Sometimes truckers will do this to avoid inspections or to save money on taxes.  However, it is usually more effort than it is worth to a person who is just driving through with a motorhome.

Another way to avoid stopping at weigh stations is to get a bypass device.  These devices work just like EZ pass.  You’ll receive a transponder and you’ll place this in your vehicle.

What Happens If I Don’t Stop At a Weigh Station?

If you don’t stop at a weight station, you may be pulled over.

After you’ve been pulled over, they’ll take all of your information and will demand that you pull off on the next exit and turn around so that you can visit the weigh station.

For their trouble, you’ll also receive a big fine.  In addition to this, they’ll probably inspect your vehicle and fine you for any further transgressions they may find.

If you don’t stop at a weigh station when you’re supposed to, you may end up on the receiving end of a fine.

If you do stop at a weigh station when you’re not required to, you may be embarrassed, but you won’t face any legal trouble.

My personal advice would be to plan your route out in advance.

If you’re unsure about whether or not you have to stop, you could always call the state’s DMV and ask.  It’s always better to know the rules before you head out on the road.  Finding out what you need to know ahead of time will help save you time, money, or both.