RVs are a big part of our culture.  As such, many movies and documentaries have been made that center around RVs.

Here are 7 of the best movies about RVing. 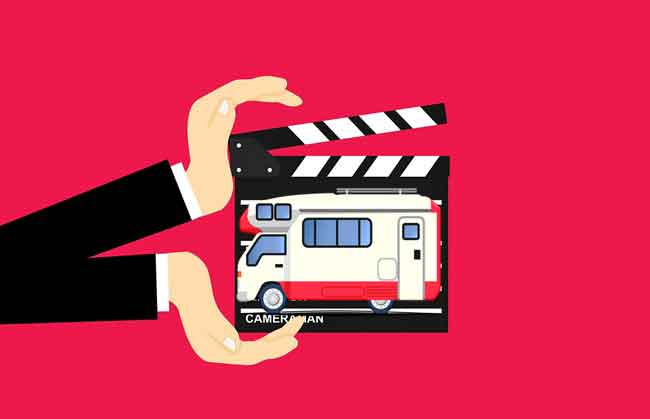 RV Nomads is a relatively new movie that was sponsored by RVillage.com.

It is a series of interviews with many people who are living full-time in their RVs.  The people that are interviewed are people that chose a nomadic lifestyle and who are having the times of their lives living these lifestyles.

If you’re interested in wanting to become a full-timer this movie will be a good inspiration for you.

This is especially true if you’re not quite financially ready to hit the road as many of the people in the movie are all still working day jobs to fund their lifestyle.

What I like about this documentary is that it shows a wide range of different people living the lifestyle rather than just one demographic.  Also, many of the people in the documentary also have their own Youtube channels so you can continue to follow them even after the documentary ends.

Static to Nomadic is a short documentary that starts out talking about one person’s journey to becoming full-time.

It starts off in Ground-Hog Day movie fashion by showing the “Nomadic Fanatic” going through the drudgeries of everyday life living in a house, working a job, and commuting.  It then goes into talking about why Eric, (the Nomadic Fanatic), decided he wanted to become a full-time RVer.

Eric then goes on to talk about how he was able to hit the road at such a young age by maintaining a low cost of living.  He talks about where he stays overnight and how he lives his everyday life while traveling.

The pace of his travels is fast as he moves every day or two.  However, he does not move far so he gets to fully experience each of the geographic areas that he explores.

Moving on from this, Eric heads out and interviews other people who are currently living full-time on the road.  This gives you an idea for other people’s motivations and you get to see how they are living compared to how Eric is living.

Many of the RVs are talked about as well which is nice as many of the people watching these videos might not be completely familiar with how RVs work.

Watch this documentary and you’ll get a full glimpse into one person’s life as they live life while traveling in their RV.

VANLIFERS: Portrait of an Alternative Lifestyle

This documentary follows the van life movement and shows many different young people who are working jobs online while exploring the world.

The filmmakers of this documentary do a great job of capturing the beautiful vistas that many of these van lifers get to wake up to each morning.

This alone makes the documentary worth watching.

Additionally, the interviewers do a good job of asking what people do to make money while out on the road.  The people interviewed are all relatively young and they are making their living in a variety of ways.  This information could be useful to anyone who is thinking about full time RVing but is unsure about how they will finance their adventure.

This isn’t to say that the documentary makes everything seem easy.  In fact, they do a good job of highlighting the plusses and minuses of living on the road in such a small vehicle while continuing to work and make money at the same time.

The Hourly American Documentary is interesting because it isn’t just about RVing.

This documentary is about a young couple who decides to buy an RV and then use it to find and work in jobs across all 50 states.  The young entrepreneurial couple gets the job website Snagajob.com to help fund their documentary and they even get half of their jobs through them as well.

The other half of the jobs were found through a variety of different sources.

Watching Heath and Alyssa’s employment journey is interesting but not as interesting as watching them get used to the RV lifestyle.

This is because the couple is new to RV living so they are learning how to travel, how to live in an RV, and how to work a whole host of different jobs.  Not only this, but they are documenting the entire process along the way which can be challenging in and of itself.

On top of all of this, Heath and Alyssa were not getting paid to work these jobs.  To make money, they did other jobs online between jobs.  This must have been very challenging and as I watched the documentary I wondered if these two ever got a chance to sleep.

If you’re looking for a documentary that only focuses on RVs, then this might not be the movie for you.  However, if you’re looking to watch a unique movie that also features living in an RV then I’d recommend you give this one a watch.

This is Nowhere is a documentary film created by High Plains Films.

The camera work and music on this documentary is spectacular and you can really tell that a lot of work went into the making of this movie.

As such, you may not be able to find it for free online but it is well worth the $2.99 that it rents for.

The documentary is different from a lot of the other new documentaries in that it isn’t just a film about young nomads escaping the rat race by becoming RVers.  This film shows the traditional senior RVers that were more prevalent a generation or two ago.

Another thing I liked about this film is that it talked mostly about RV life via free Walmart parking lots.  However, it didn’t paint a bleak picture of people struggling to make a living and having to stay at Walmarts to get by.  In fact, most of the people interviewed seemed to be staying in Walmart parking lots by choice rather than necessity.

If you’ve ever contemplated building your own RV, you’ve probably been to the website, doityourselfrv.com.  Without Bound starts their documentary off by interviewing Bob, the owner of this website.

It then goes on to interview many people that are living their lives on the road full-time in an RV.

This documentary seems to give a less rosy picture of what it is like to live in an RV full-time.  I think this is because many of the people that are interviewed got into the lifestyle because of some great personal tragedy or a lack of money.

Combine this with the fact that most of the documentary is overlayed with depressing music and it makes life on the road seem depressing.

I thought this type of spin was kind of a shame because I’ve seen many of these people on Youtube and they didn’t seem depressed about the lifestyle at all.

This being said, I do feel this documentary is worth watching as many of the people in it have had interesting lives and it is nice to see the backstories of people who got into RVing for a wide variety of reasons.

If I could change one thing about this movie, it would be the depressing music that was added to many of the scenes throughout the film.  It can be really hard to focus on the personal stories of the people interviewed with this music playing loudly in the background for most of it.

The Full-Time RV Living Documentary is an ongoing documentary created by Tim and Fin of Youtube fame.  This couple spent a year on the road and loved it so much that they’ve decided to get back on the road to do the Pan-American Highway.

If you’re unfamiliar with this highway, it is probably because it isn’t actually a highway at all.  It is a network of many different roads that go through the American continents.

According to Wikipedia, this series of highways it 19,000 miles in length.

I think this is a really interesting show because it explores much more than just the United States.  This couple will end up going through many different countries and will experience many different cultures and climates.

After the couple has completed their journey, they’ll merge all of their videos into one large documentary video.  If you’re curious as to how this will look, you can watch the merged version of their first year on the road which started off as a weekly series as well.

For anyone looking to watch more videos that center around RVing, there is a wealth of resources available right now.

You can watch thousands upon thousands of hours of free videos on Youtube and you can support your favorite videographers to gain even more access to exclusive videos.