As the temperatures get colder, you may find yourself spending more or less time in the quarters of your RV or recreational vehicle.

The winter is one of the top seasons for travel, and you may be venturing to areas with freezing cold temperatures.

On the other hand, you may also plan on stashing away your motorhome temporarily, leaving it to hibernate over the wintertime.

Regardless of your plans, if you are an RV owner, there is a necessity to winterize your vehicle. Winterizing your RV is an important aspect of RV ownership because it protects your vehicle’s plumbing systems against the arctic temperatures.

In this article, we will address the importance of antifreeze and any burning questions you may have regarding it. 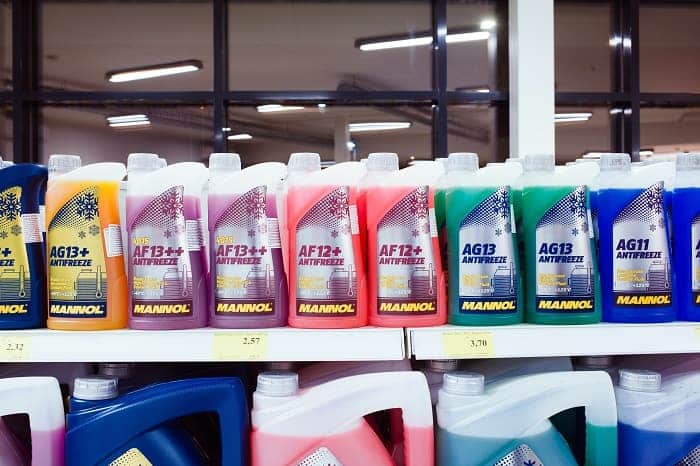 Where Can you Buy RV Antifreeze?

RV Antifreeze is not difficult to get your hands on, and it can be found in a variety of stores near you.

RV Antifreeze can be found at Lowes, Walmart, Home Depot, and Autozone.

Though the company may differ, RV antifreeze is typically labeled as “RV & Marine Antifreeze,” and it often comes in pink color.

Automotive antifreeze and RV antifreeze differ greatly in composition and function. Thus, the different types of antifreeze are not interchangeable for use.

As a result, you must be careful when purchasing antifreeze to ensure that you are buying the right type of product.

If you own a bottle of RV antifreeze, you may be wondering how long it will last you.

Generally, RV antifreeze should not go bad soon after purchase as long as the product is taken care of properly.

In most cases, the shelf life of RV antifreeze is between one to five years if the cap on the bottle is closed properly.

When inside your RV, it can last about one to five years as well.

Using antifreeze beyond that date can risk complications to your RV.

If you want to test to see if your antifreeze has gone bad, you can do a simple experiment at home:

It is commonly known that RV antifreeze is advertised as non-toxic in small quantities.

However, RV antifreeze is still a chemical, and it can be dangerous to living things such as grass. Though biodegradable, RV antifreeze contains heavy metals that are harmful to plants.

If you wish to dispose of your antifreeze, there are many better ways to dispose of the product than by dumping it on your grass.

Can RV Antifreeze be Dumped on the Ground?

Though it is not recommended, RV antifreeze can hypothetically be dumped on the ground if it is a very small amount.

However, you should not dump large amounts of RV antifreeze on the ground because it can be poisonous to humans, plants, and animals in large quantities.

In replacement, you should look at the bottle to see if there are any listed instructions on how to properly dispose of antifreeze in a safe manner. You can also take your antifreeze to a service station, recycling station, or auto repair shop for proper disposal.

Despite it being non-toxic, dumping RV antifreeze on the ground is not an environmentally-friendly choice.

Can RV Antifreeze be Used in Cars?

Their chemical compositions also differ, as RV antifreeze is typically made of propylene glycol, and automotive antifreeze is made of ethylene glycol. The two products should only be used for their respective vehicles, and they are not compatible or interchangeable with the other.

Theoretically, RV antifreeze can be used in a car’s cooling system.  However, it will not be close to being as effective as an antifreeze that is explicitly designed for automobiles.

Furthermore, putting RV antifreeze in your car’s engine would cause damage to the radiator and heater core.

This would be extremely costly to fix and inefficient at best, proving that the risk of putting RV antifreeze in your car is not worth the result.

Can RV Antifreeze go Down the Drain?

Regardless of what you are told, RV Antifreeze should not be dumped down the drain.

Even though RV antifreeze is non-toxic and biodegradable, it is still dangerous in larger quantities. When you dump RV antifreeze down the drain, animals can access the discarded liquid through storm drains.

Antifreeze’s sweet scent and flavor will attract animals, causing them to consume the product unknowingly. This will be harmful to their bodies and can ultimately disrupt the ecosystem.

As a result, it is advised not to dump RV antifreeze down the drain.

Antifreeze is a product that can stay good for many years. If unopened, RV antifreeze will last indefinitely without expiring.

Once the bottle is open, the antifreeze can last for one to five years after.

Some RV antifreeze products will have a specific expiry date on the bottle while others don’t. If your product does not have an expiration date, it is safe to assume your antifreeze will last at least another two years if sealed properly.

To make sure your antifreeze will last as long as possible, keep the product in its original container and use an airtight seal. As long as the antifreeze is not contaminated or in use, it will not degrade inside of the bottle.

Regardless, it is important to check if your antifreeze has expired before you utilize it within your RV.

To check if your RV antifreeze has gone bad, refer to the at-home test you can perform in the section above, “Does RV Antifreeze Go Bad?”

RV antifreeze is designed to avoid evaporation and freezing.

However, if the water is mixed with RV antifreeze, the solution will evaporate over time.

Albeit, this process is very slow, and it will take a significant amount of time for RV antifreeze to evaporate completely.

RV Antifreeze is a product that has the sole function of lowering the freezing point of water.

Antifreeze can prevent ice from forming, but it does not do anything about ice that already exists. As a result, antifreeze does not have the ability to thaw or melt ice.

Instead, antifreeze can only hinder the formation of ice in your pipes.

If you are looking to melt ice in your water systems, utilizing salt or heat could be your solution instead.

RV antifreeze is notorious for having an oddly sweet smell. The smell is said to be pungent and fruity in a positive way.

As a result, it is necessary to keep antifreeze away from children and animals in case of ingestion.

Though the smell can spark curiosity and temptation, it is imperative to avoid the consumption of RV antifreeze.

Even if antifreeze is labeled as non-toxic in small quantities, large amounts will definitely cause damage to your body.

If you are a joyous RV owner that takes pride in your recreational vehicle, you may find yourself being sensitive to staining and damage in your motorhome.

RV antifreeze has a bright pink color, so you may be understandably skeptical as to if the product could tint your toilets.

In truth, RV Antifreeze does have the capability to stain toilets. If you use low-quality antifreeze or don’t wipe up any excess product on your toilet, the antifreeze is likely to stain your toilet.

However, if you invest in a good quality product and clean up well after yourself, you can avoid staining and discoloration.

Septic systems are a method of treating wastewater from plumbing, and they are often used in the replacement of centralized sewer systems.

RV septic tanks are an integral part of the plumbing system that must be maintained.

You can safely use RV antifreeze in your vehicle without having to worry about risking damage to the septic systems.

Can RV Antifreeze be used as Windshield Washer Fluid?

RV antifreeze should not be used as windshield washer fluid.

For one, RV antifreeze is pink in color, so using it as washer fluid could discolor and tint your window.

To add on, the composition of RV antifreeze is very different from standard windshield washer fluid. If you use antifreeze as an alternative to washer fluid, it would smear all over your window and cause the glass to look oily.

This would become a hazard as the smudged windows could disorient your view when driving.

Under any circumstances, RV antifreeze is not intended to clean your glass windows. Thus, using the antifreeze as such would not be effective at all.

Though RV antifreeze is cheaper than windshield washer fluid, using them interchangeably would not work in your favor, and it is not recommended.

Can You Mix RV Antifreeze with Water

RV antifreeze is designed to work in water systems to prevent pipes from freezing and breaking.

If water were to mix with antifreeze, nothing dangerous would happen.

When RV antifreeze is working in water systems, leftover water in the pipes would inevitably mix with the water anyways. The combination of RV antifreeze and water does not cause any harm or hazardous chemical reactions.

However, using intentionally diluted RV antifreeze in your systems is another story.

If you intend to dilute the antifreeze prior to use you would reduce its effectiveness and cause the antifreeze to lose its protection abilities. Using diluted antifreeze would allow ice to form and damage your pipes.

This would eventually cost you even more money as you would need to get a professional to fix your RV. If you want to mix antifreeze with water, you can buy antifreeze concentrate that needs to be diluted slightly.

In this case, it would be crucial to carefully follow the listed instructions on the antifreeze concentrate so the product can work in its most optimal form.

In conclusion, RV antifreeze can mix with water, but you should not use intentionally weakened antifreeze in your RV.

Antifreeze is an especially crucial part of winterization, for it will protect your water lines and tanks from freezing, expanding, then breaking.

Without winterization, you risk damage to your RV, which would result in a very costly and time-consuming fix.

How to Safely Dispose of Antifreeze

RV Antifreeze- 11 Things You Should Know