If you’re looking for a small boat with a cabin, what you’re essentially looking for is either a trawler, a cuddy cabin, or a “cruiser”.

Let’s break down each category and find some great deals for each.

After we’ve gone over these categories, we’ll also go over a few questions which need to be answered before you decide on a purchase.

What is the most affordable cabin cruiser or a small cabin boat?

There are a variety of cuddy cabins which are both affordable and spunky while out on the water.

Some of the best options you can find are:

What is the best trawling boat?

While you might not be a fisherman at heart, some of the heartiest boats are fishing boats. They have bigger cabins for fisherman to relax after a hard day on the water as well as large storage areas for their gear.

Trawling is a method of fishing where the fisherman drags a net through the water behind them.

Recreational trawlers aren’t actually fishing boats, however. They resemble the vessel’s design, but that’s where the similarities end.

Remember that recreational trawlers use smaller engines than their fishing brethren; one which will only produce approximately 80 hp.

Trawlers have a dedicated following. These boats can be slow cruisers but, at their heart, they weren’t built for speed. After all, they are single-engine boats that can go from 7 knots to 20 knots.

One of the best values when it comes to trawling boats is the Carver c34.

While it might not be as inexpensive as the other options in this article, at $371,820, you’re getting a smaller (34 feet long) more economical coastal cruiser.

If you look for this boat used, you will most likely find it over $100,000 cheaper than the new sticker price.

What is the best boat to buy for a beginner?

While the cabin is huge, as is the full galley, and the large dinette, the price also matches the large accommodations.

However, it will be difficult to find such accommodations on a boat of this size. Not only that, it comes recommended for a beginning boater by Lenny Rudow of Boats.com.

What is the best cabin cruiser under 30 feet?

At 28 feet, the Bayliner 285 SB is a great cruiser which is still small enough to be towed and stored on your property.

But at the same time, it is still big enough to say overnight if you feel like going on a weekend excursion on your boat. The price ranges from $96,000.

What is the best cabin cruiser under 25 feet?

A cabin cruiser is a powerboat with overnight accommodations and a galley.

They are generally faster than trawlers and cuddy cabins and can range from 25’ to 100’ in length. There are a number of different types of cruisers, including: 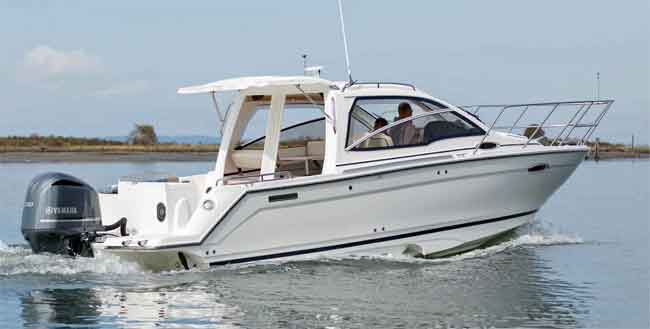 It also comes in a longer 10’ model and has a double-stepped hull with a deep entry that turns into a moderate keel pad, which shows off its maximum efficiency.

It even has the option of coming with an electric grill built into the transom, and an adjacent sink. The former is fully removable and can hide under a fully rigged livewell.

All of these small touches add to its appeal.

What if I don’t necessarily need a cabin?

If not having a cabin isn’t a deal breaker, your options for affordable boats just blew wide open:

Is it better to buy a used boat?

There are plenty of advantages to buying a used boat. The biggest advantage is the price. While you might find some expensive boats listed on used vessel or vehicle websites, but you will find more reasonably priced used models than not.

Just like a car, a boat depreciates in value when it gets driven off of the lot.

Because of that, a used boat will better hold its value.

Another perk to buying used is the option to buy from a private seller or a dealer.

While there are many different perks, there are also a few disadvantages. One of which is that you never really know what you’re going to end up with. You might be able to take it out for a ride with the seller but if you don’t have a boat mechanic look at it, you won’t really know what kind of wear and tear it’s been through.

If you do buy a boat used, make sure to inspect:

Don’t be shy about inspecting as much as you can.

An example of how to save money with a used boat is with the C Dory 23’ Venture Sport which weighs less than 3000 lbs. and has a fuel capacity of 60 gallons.

Fishermen will love how it tracks while you’re trolling, which will let you focus on fishing. Every day boaters will love how much headroom is in the cabin and how much more pleasant it is to cruise on rough waters.

If you decide to find yourself a used boat, it would be best to check out some local options.

When is it better to buy a new boat?

A new boat ensures that you’re getting what you want. The ability for customization is fantastic. From the paint scheme to the engine and turbines to the stereo system, you can fulfill your wish list in one stop.

New boats are both shiny and clean. You’ll rarely have any issues with the engine. You might also have the backing of a manufacturer’s warranty, which isn’t just a great deal of safety when it comes to your finances (in the long run) but is also great peace of mind.

The downside to buying a new boat is the price. You’ll also have to deal with the depreciation, which starts as soon as you tow it off the lot. While it might cost a little more, look for high quality, trustworthy manufacturers and builders, which could help with the depreciation.

What exactly is a cuddy cabin on a boat?

A cuddy is another term for a small room on a boat. It comes from the 19th century when they used to be referred to as saloon cabins, which were on the stern of ships.

These days it refers to a small shelter cabin, which has a small berth and head. Normally, they are not tall enough to stand in but are still popular recreation boats for boaters who don’t quite want to upgrade to a full-size cabin boat.

A lot of fishermen use cuddy boats as their fishing boats because of the price, storage capabilities, and the small stature.

When going on a treasure hunt for your future boat, make sure that you have these things before you leave the house:

Remember that it may take a little while to find your dream boat.

It can be difficult to cull through all of the choices at the lots or on the internet. Know that the only way to make sure which boat is perfect for you is to take it out for a spin on the water.

If you’re still indecisive, that just means that you can go out and try out as many different boats as you can. This search doesn’t have to be a chore; go out and have fun.