According to the Saltwater Marine website, Trailcraft “sets the industry standard for aluminum boats”.

But since they are the manufacturers of these aluminum fishing boats, can consumers trust that statement? When it comes to researching the make and model of a boat, you must look at its advantages as well as the products’ common problems.

These are some of those issues that some people experience.

This was an issue with a few boats back in 2006. While the issue hasn’t arisen as of late, the fact that it was a problem is a reason to take note. After a few trips out on the water (and normally after a bit of rain), the “water in fuel” gauge would light up on the dashboard.

For most people, this one-time occurrence is more of a nuisance than anything else.

However, with a few boaters, this was a reoccurring problem with their Trailcraft boats. After a couple of months, they would see it again, then again after a few months of use or after a few heavy showers of rain.

The fix? A new filler cap and a different breather. Back in 2006, there was a new design of filler caps which had a tendency of leaking.

They have since fixed this issue with their newer models.

Why outsource? Well, most companies outsource their parts and manufacturing for the same reason: it’s more cost-effective. When you can keep the cost of the parts down, you can keep the price of the whole product down as well.

Some of these boaters didn’t mind the extra expense of home-made products. Besides the national pride, a few of the other reasons for appeal were that:

3. Stability of a Trailcraft

Back in 2005, there were a few instances of Trailcraft boats flipping over and turtling out on the water (upturned), due to even the smallest swells.

The same reasons that a boat can keep water out, helped hold water in for one boater, who found that the sealed section of the boat had filled with water. Because the boat didn’t come with a bilge pump (because of that sealed floor), it held water easily. This particular incident was due to the transom door being left open.

No matter what, the idea of a boat upturning and/or sinking is the worst fear for most boaters.

Not only is that dangerous, that is also thousands of dollars sinking to the bottom of the ocean or lake. What is a boater to do?

Luckily, since 2005, there have not been many instances of this occurrence happening again. Maybe Trailcraft changed their design, but either way, boaters are grateful for it.

Generally speaking, these aluminum fishing boats are known for being fairly plain.

There are a few people who state that, because of how sturdy the hull is built and because of the design of the hull (the shape), the ride in a Trailcraft boat can be pretty hard. For hardcore boaters, this may not be a big deal.

Better bring some extra padding for your seats.

Luckily, the newer designs have better developed and designed hulls which don’t sacrifice their sturdy build for a better, more water dynamic design.

General Pros and Cons for the Trailcraft

There are a few great things about Australian Trailcraft boats. In fact, in more recent years, there have been a number of improvements in their designs, which has helped most of the complaints to disappear altogether.

As far as the cons are concerned, some of the most common or the most surprising are:

“Trailcraft’s latest 5.3m Sportscab is far more than the simple fishing boat most plate-aluminum vessels tend to be. Yes, the Sportscab is a fully functional fishing machine, but it’s also a top family boat, especially for parents with a couple kids.”

In this review, Warren Steptoe explains the various amenities that come with the Trailcraft 5.3 Sportscab which make it more than a fishing boat: lots of storage, comfortable seats, as well as nice upholstery. One of the unique designs was the port side transom door which worked nicely alongside the standard folding swim ladder.

In addition to the amenities, he also noted that the dealership was experimenting with the engine set-up and had raised it to see if it would improve the performance. He commented that while it felt good, it was headed back to the shop after the test because of a lack of propeller bite.

“They produce a stunning range of ‘plate’ alloy boats that are both well laid-out and affordable.”

He also commented that both the finish and the layout were amazing, especially for such an affordable boat.

“There are many small-boat builders in Western Australia, most of which supply only the home market. A few, however, have spread their wings and invaded the east coast.” – Col Buckley,

Col Buckley had rave reviews for the Trailcraft 660HT, but he did test-drive it with a plethora of additional amenities. That being said, he complimented everything from the hydraulic steering to the lockable transom door. The only thing he had complaints about was the swim platforms which submerged when the boat was in reverse and pushed the rear of the boat down. Poor form, guys.

What’s the Resale Value on Trailcraft?

Trailcraft boats, mainly sold in Australia follow the Australian dollar, which is what is listed below.

In the table below are new and used prices for a number of Trailcraft boats which range in both price and year (1985 to 2019). 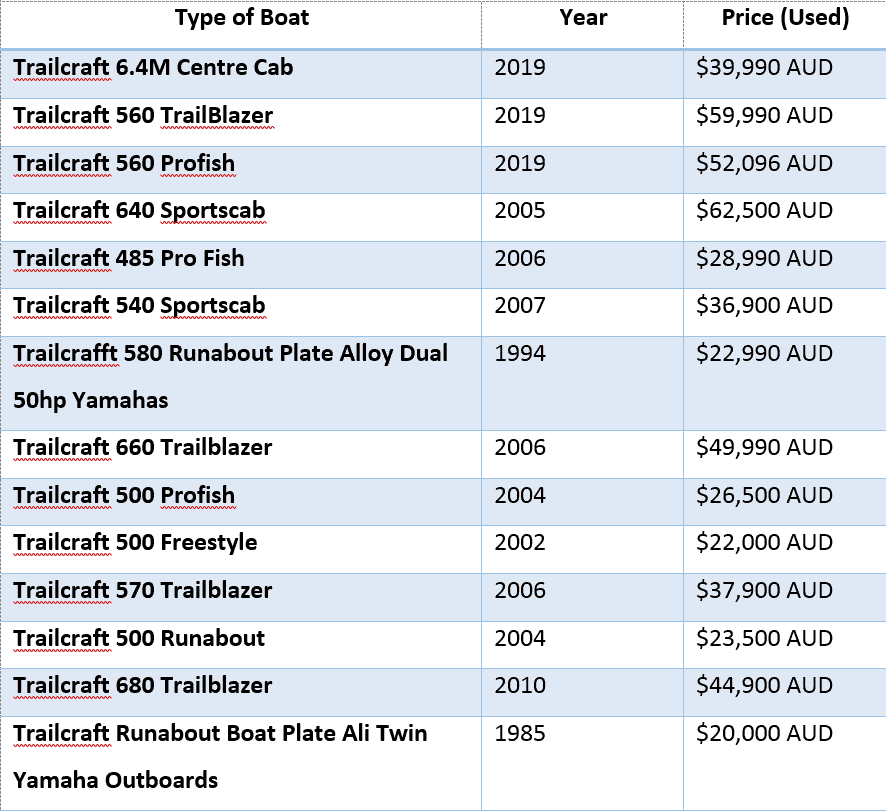