If you’ve ever ridden on a jet ski while you were on vacation at the lake or at the beach, you probably know just how much fun they can be.

Jet skis and jet boats can be a lot of fun, especially for those who like to be able to speed and cruise across the water.

Unfortunately, they also come with their fair share of problems:

1. They Are Twice as Loud When You Cross the 30 MPH Threshold

Jet boats go an average of 25 mph but can go way beyond that if the water jets are more efficient (around 60 mph).

With most boats, it isn’t necessary to have ear protection while you’re out on the water.

Unfortunately, that’s not necessarily the case with Jet boats. As soon as they cross that 30-mph threshold, they double in decibels.

2. Jet Skis and Jet Boats Can Suck Up Foreign Objects in Shallow Water

This can damage the impeller and can cause various types of damage, depending on the object(s).

The fix is to shut off your engine before you get to shallow water, then let the momentum and the current put you to the beach. When you’re taking off, have a partner push you off.

The water should (hopefully) wash away the sand before you start your engine.

3. Used Jet Skis Can Come with A Ton of Problems

People have a tendency of using jet skis hard, then selling them with either neglectful damage or outright damage.

Often, it isn’t the jet skis themselves that have the problem, but the ignorance or neglect from the previous owners.

At the least, you should get a test ride, not just buy it on its trailer.

4. Sea-Doo Boats Would Get Rusty Rings and Housings

Plenty of owners of older Sea-Doos would complain of the pump housing rings getting corrosion.

However, this isn’t a problem anymore since most (if not all) of the newer models have polymer housings.

They also have models that have closed-loop cooling in order to avoid the problem altogether.

When it comes to jet skis, the bilge pump and capacity (as well as the battery capacity) aren’t great.

Jet skis and boats are built to go fast and turn sharply, however, so that takes quite a toll on both of these systems.

Some jet boats are known for having less torque which can make it difficult to maintain speed in a turn.

This also makes it difficult to accelerate when it is already at a high RPM level.

This makes them less fuel-efficient.

However, don’t get it wrong, each engine and each boat is a little different, so they aren’t all horrible with fuel consumption, but they do have a tendency of being one of the least fuel-efficient types of watercraft.

Remember that there are also a lot of other things that go into fuel economy, not just RPMs.

7. Costs of Maintaining a Jet Boat

Jetboat engines aren’t like “regular” combustion engines, which means they need specialists to care for them.

If you maintain your jet boat, you can keep the cost of maintenance down, but the routine tune-up costs will add up over time.

Jet engine boats can run at both high and low speeds, but when they run at a low speed for a while, it can take it some time to kick it into high gear.

In the same vein, when it is running at a high speed for a long period of time, it can take a moment for it to be able to run at a slower speed.

There have also been a few complaints online which state that it is difficult to run a jet boat in reverse when needed.

They are also reported to be more difficult to maneuver for docking.

There are many advantages to jet boats as well.

It might seem a little silly to say, but jet boats can be quite impressive when it comes to power and propulsion. Their acceleration is unmatched, and they have great top-speed (of course, depending on how your engine is set up and what sort of horsepower it is rated for).

They are also safer because there isn’t an exterior propeller. It is much safer when you don’t have to worry about a spinning prop. Even if a prop isn’t currently spinning, it can still be dangerous and can get in the way when it comes to diving, or swimming. If you have a family (especially with small children), this might be one of the best features for you.

Since there isn’t anything hanging down underneath the boat (like a prop or a driveshaft), you don’t have to worry about operating a jet boat in a shallow lake with stumps or other things that a prop could get caught on. While you shouldn’t operate the boat in a foot of water, it is comforting to know that you can if you needed to.

The amount of room in the cockpit of a jet boat is significantly larger than a boat which is a sterndrive. Since the jet motors sit lower and, in the back, they allow for more room in the boat for you and your gear.

Since there isn’t a prop, water sports enthusiasts will be happy to hear that you can do a bit of wake surfing behind a jet boat.

This is something you can only do behind an inboard boat (or the Volvo Forward Drive boat, otherwise known as an FFD).

Some of the disadvantages of jet boats and jet skis include:

“Last January in Bimini over an icy Kalik or five, I hatched a plan with Jon Rall, a PR rep for Kawasaki, to take the company’s new 300LX Jet Ski in the open ocean from Los Angeles to San Diego. It seemed like a great idea at the time.” – Kevin Koenig

Kevin summarizes the trip by talking about the beautiful wildlife, the awe-inspiring coastline, and the other happy water-goers near the bays and docks. He called it a grueling trip, which is understandable. 140 miles on a jet ski doesn’t sound incredibly relaxing. But the point of his experiment was just: the little jet ski made it and so did he.

“After we tested the new Yamaha 210 FSH Sport, I had to analyze my attraction to center console boats. It’s a puzzle because I am not much of an angler, and I don’t live in the warmer coastal region where center console boats are indigenous.” – Charles Plueddeman,

In his review, Charles Plueddeman explained that the center console format made him feel much more athletic and ready for anything while he was on the boat. He explains that since this center console boat (normally the perfect layout for a fishing boat) has jet propulsion, it is perfect for general purpose water sports and fun.

He also explains that the jet power makes for less draft and maintenance and more transom than the regular outboard setups in center console boats.

“Muscling their way onto the market in the early ’90s, “sport jets” jet boats were dismissed as little more than toys, quick and agile playthings, scoffed at by serious boaters. They peaked quickly and then vanished just as fast.” – Jeff Hemmel

Jeff Hemmel goes on to say that jet-powered runabouts are becoming some of the best-selling 24- and 21- foot runabouts in 2017. That’s not too bad, considering that was only a couple of years ago.

By the end of the article, he explains that while jet drive boats and sterndrive boats are equal in cockpit volume, docking, general handling, maintenance, corrosion, and running draft, the jet drive boats they tested were clearly superior in:

What’s the Resale Value on Jet Skis and Jet Boats?

You can find used Sea-Doo Sparks for around the same price. However, Kawasaki Ultra 310LXs can be found at least $4000 cheaper when it is used. Depending on the year, you might even be able to find it around $7000 cheaper.

As far as new jet boats are concerned, jet boats can vary from $30,000 to $200,000 depending on the make of the boat, the engine specifics, and the various standard or options.

The price of new jet boats available online is limited to 2019 and 2020 boats which—unfortunately for our use—no one has been reselling just yet.

Because of that, finding the resale value of jet boats can be a bit difficult.

Here are the numbers we did find, just to help you get a head start if you are interested in doing the research: 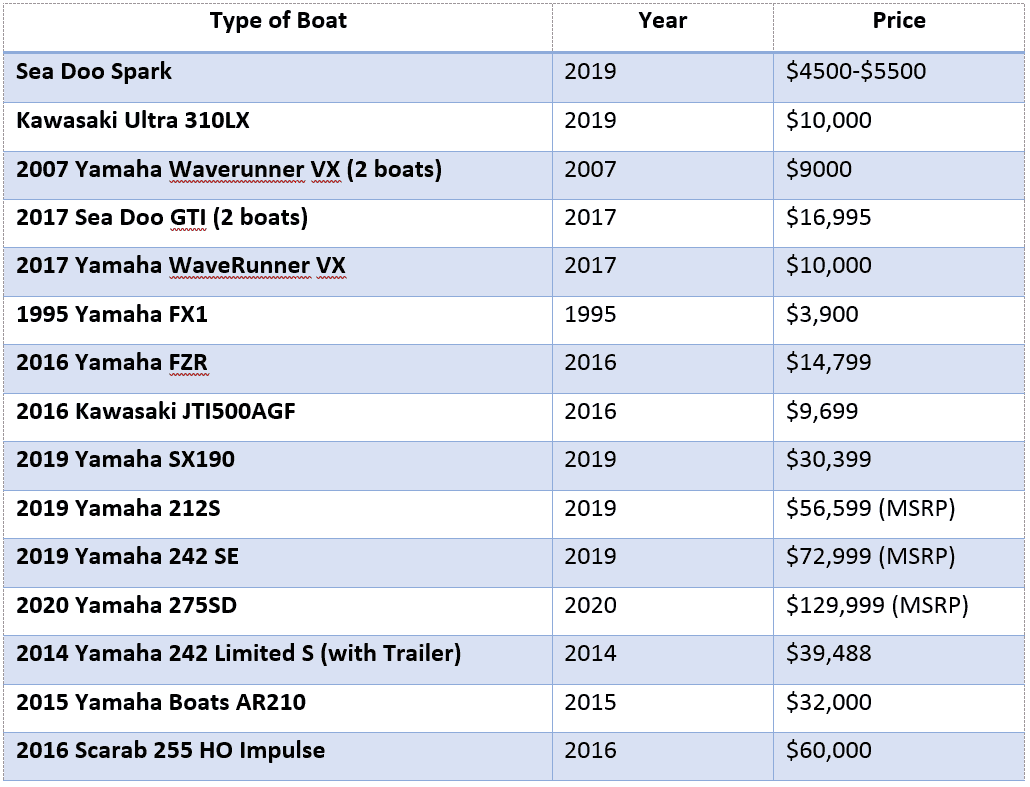 There are a lot of downsides to jet boats and jet skis: the price, the maintenance, the maneuverability, etc.

On the other hand, a jet boat could be the perfect boat for you, if you are looking for a boat:

While some families would find the prop-less set-up much safer for their children, other families might not like the maintenance problems that come with different types of jet-drive boats.

When looking at jet-powered boats, make sure you are considering your long-term use for the boat to see if it will fit your needs.