This is a project Maria has been wanting to do for a long time.

We finally found a cheap vintage camper ($459), and in this video, you can see what it looks like today before we start.

We don’t really know how we are going to use this camper yet. It all depends on how the project turns out.

We are not really big fans of camping, and we will try to turn it into a tiny one-room apartment on wheels, and who knows – if we like it we might move into it long-term.

We want to explore Europe, and a tiny home on wheels might be a good fit for that (and our budget).

We might not be able to fit everyone in here, but let’s try it. Right here when we come in there’s a seating area with a table that folds down, and then you sleep on it.

But I think I’m gonna put a kitchen here – that’s the plan I have right now.

I want to put a full-length/full functioning kitchen in here, so we have a place to cook.

Over here we have some storage. It’s just a cabinet, and it has some shelves in there.

This might sound a little weird, but this is actually way more storage than we need, so this is probably also gonna go. We don’t need that much storage. We don’t have that many things.

In here is what they call a wet-room. It’s not really a bathroom, as it doesn’t have a bath, a shower or anything. 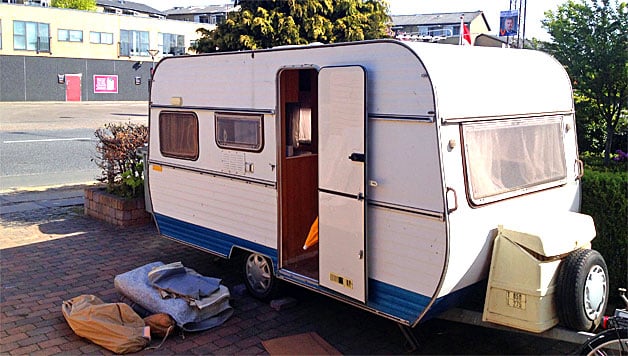 It’s basically just at the room with a sink. So, in my opinion, it just a waste of space. Maybe we can use that for something.

Over here is the kitchen. It has a fridge, and if you open it up there’s a standard 3-cooker and a sink.

I don’t know if I’m gonna reuse this in any way.

I might in the beginning, as I’m on a very tight budget. So I’m gonna see how cheap I can do it.

Over here is a lot more overhead storage. I’m not a big fan of this. I know a lot of people need a lot of storage, but I don’t really like it. I feel like things are falling down on me, and then I get claustrophobic. Since we don’t need the storage its fine.

Down here is another table and seats folded down, and we don’t need that either. We’re probably gonna keep this area as a bed/sofa, but we’ll see how it all turns out.

In this next video, we are emptying the camper completely, to be able to re-furnish it with lighter colors and a more simple setup.

We had a lot of fun tearing the inside out!

As you can see most of the stuff inside is really old, rusty and nasty, so we decided to throw everything out.

We were surprised how well everything was glued together, and we had to be careful not to break anything in the process.

Some of the shelves and parts were attached to the outer shell of the camper.

One Saturday – One old camper down!

We did manage to get almost everything out during a Saturday, and we slept like babies afterward. 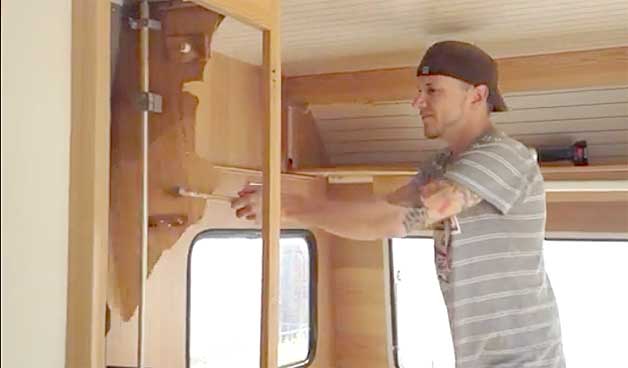 We finally got everything out, and we now have an empty shell, ready for new bespoke furniture.

A good project for the summer.

Maria has big plans with the interior, and everything will be fitted and build to utilize the tiny space as well as possible.

The camper has a beautiful look with its round forms, and it already feels a lot more cozy, than the old rusty thing we bought. 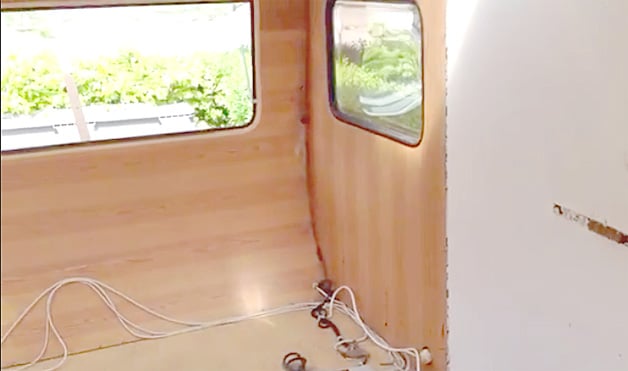 We decided to put in “new” (read: another) kitchen, and we will also install a good fridge, so we can bring food when we travel.

I think we can save a lot of money if we are able to store more food in the kitchen.

We have installed the bed. It’s not a king size bed, but it’s big enough for the two of us.

The backrest can fold up and down, in order to hide the duvet and pillows during the daytime, and the solid back also makes the bed double function as a sofa.

The bed is made from scratch and 100% custom made to fit the dimensions of the camper.

I bought a mattress at Ikea, and upholstered it to the bed frame.

The table is the original table from the 70s!

I started by spray painting the borders and leg of the table, and then I put wallpaper on the back, to make it blend in with the wallpaper when it’s folded up against the wall. 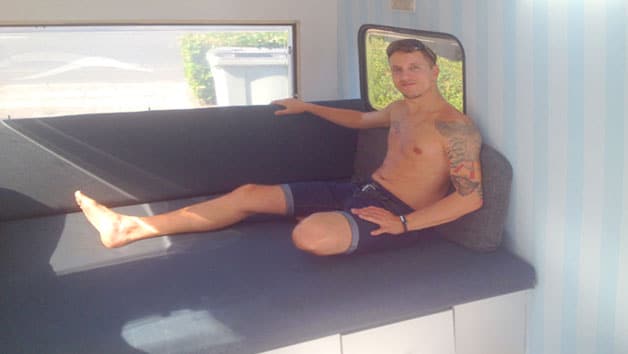 I am really satisfied with the result.

The baby blue color goes well with the white interior, and the kitchen we will have in the front of the camper.

Note: This video was filmed last year, it just took a while to get it up due to the pregnancy.

Before we could start we had to empty the camper.

We don’t have a garage, so we had to store everything inside the camper during the long Danish winter. Maybe the weight of all that stuff caused the flat fire :/

Some of the wooden framings that hold the ceiling turned out to be completely rotten, so we’ll have to replace it when we put up the new ceiling.

It’s alright really because we are going to put in new skylight windows, so we probably would have to build up a new wooden frame anyway.

We expect to put up the next video in this camper remodel series pretty soon, so stay tuned!

We have made a playlist of all the camper remodeling videos (watch below), and you can also find it on our Youtube channel of course.