Denmark is one of the most expensive countries in the world, and this is also true for real estate prices. which make tiny houses even more relevant.

In Denmark, there’s a long history of urban farming.

People who live inside the cities can own a small piece of land at a very low price (with or without a tiny house), and be able to get some fresh air and grow stuff.

Let’s start with a beautiful little house we were allowed to film:

We really love how this house is laid out. It’s not made for all year round living but you totally could do that if you wanted to. The family lives ended with two kids and they have chosen to have a big living space with a full-size kitchen.

It’s very popular to cook your own food in Denmark so a lot of small spaces will have a full-size kitchen.

Another great feature of this house is how they used wooden panels to decorate the house. Not only does it look really great but it also makes a house blend into nature in a very cool way.

Here another tiny house on wheels built in Denmark

Pres play and enjoy this super minimalistic tiny house from the small village “Odder” in Denmark.

You’ll get surprised when you see the layout of this house!

I think it has a very different vibe than most other tiny houses on wheels.

The dark wooden panels go really well together with the light colors on the opposite wall and around the window frames. Michael is showing us around the house and he built this prototype himself. We love meeting these cool folks who are really idealistic about passionate about building tiny homes.

Again, notice how big the kitchen space is. Danes really like to cook their own food.

These garden coops are placed in green areas within the cities, or just outside, but within biking-distance.

There are probably around thousand of these houses in Århus (where we live). There are six or seven different neighborhoods where you only find these small little homes. 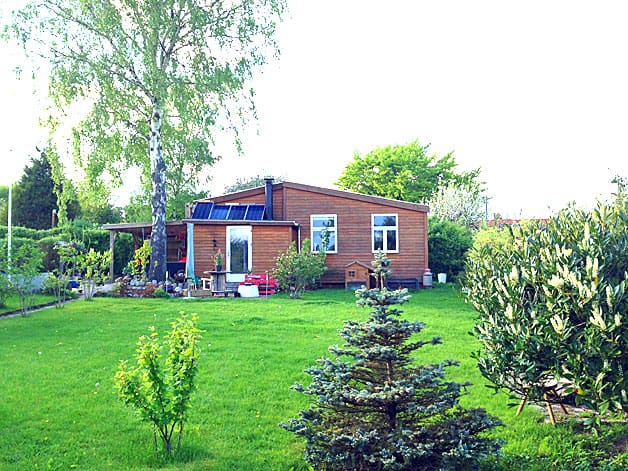 You also find a lot of creative houses made out of old train wagons and other cool materials.

The house below this made from an old train wagon and beside it you have a very small house which is built on a foundation.

Today there are 60.000 of these small plots across Denmark, and most of them have a small house, where you are allowed to live full time from April to October.

During the winter electricity and water is turned off, and you go back to your city apartment.

The plots are meant to be used for urban farming – not housing, because of this the prices are kept low, so everyone has a chance to save up for it. Because of the low price, it’s also very popular among young couples and students. We have seen the great spike in interest for these houses over the last decade or two. 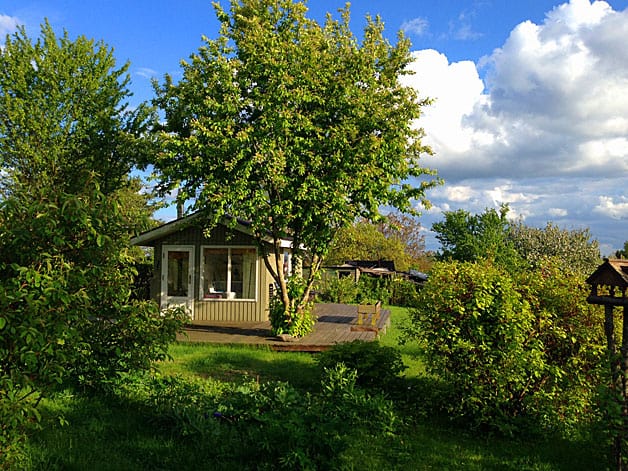 Many houses will have solar panels on the roof to be absolutely off the grid. This is a great option for these houses because the area turns off electricity and water during the winter.

So to be able to use your house more all around the year you will have to be self-sufficient when it comes to water and electricity. 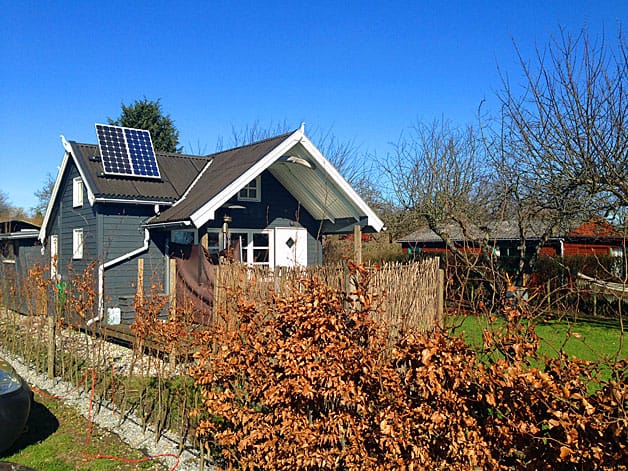 In general, prices are low, because the state owns the land and leases it for the coop, but through the past 100 years, some of these coops has gone private. They bought the land from the state.

These plots are priced higher, but they are still a lot cheaper than a regular building plot, and since water and electricity aren’t turned off you can get away with living there full time.

With a plot like this with a tiny all-year-round house, you can own your own house for 1/5 of the price of a regular city house!

This way you can actually buy a plot and build a house you can afford. As you can see people are really creative when it comes to solar panels and little windmills. People also like to paint their houses with strong colors which are really pretty and cozy.

It adds a lot of atmosphere to that area. We took the pictures during the winter time waits was a pity. We should have gotten here in the summertime when all the trees would be green and flowers would light up the place.

It’s really a great area for taking long walks and think about life. A lot of these small houses have windmills and solar panels installed.

The first plots were established in late 1800. People lived side by side in small apartments in the cities, and it was important to be able to grow your own vegetables and food, in order to feed your kids.

Today there are lots of green areas inside the cities, but you can still buy a small plot and build a tiny house. It’s the perfect combination of urban living and enjoying nature.

Do you have the same garden-coop concept were you live?

We have filmed a ton of tiny homes and apartments.