Tiny homes and small space living is not a new invention!

We have found 17 really fun solutions from early 1900!

Baby cages attached outside a window

Believe it or not: These “baby cages” were used to ensure that babies got enough sunlight.

They were marketed to families living in inner-city apartment buildings – without easy access to green areas.

These two photos are from New York 1937.

Check out how calm and peaceful the baby looks, sitting in a small cage hanging out the window!

This is the baby cage photographed from the outside.

It definitely looks dangerous, but they were on the market in both the US and England in the 1930’s. 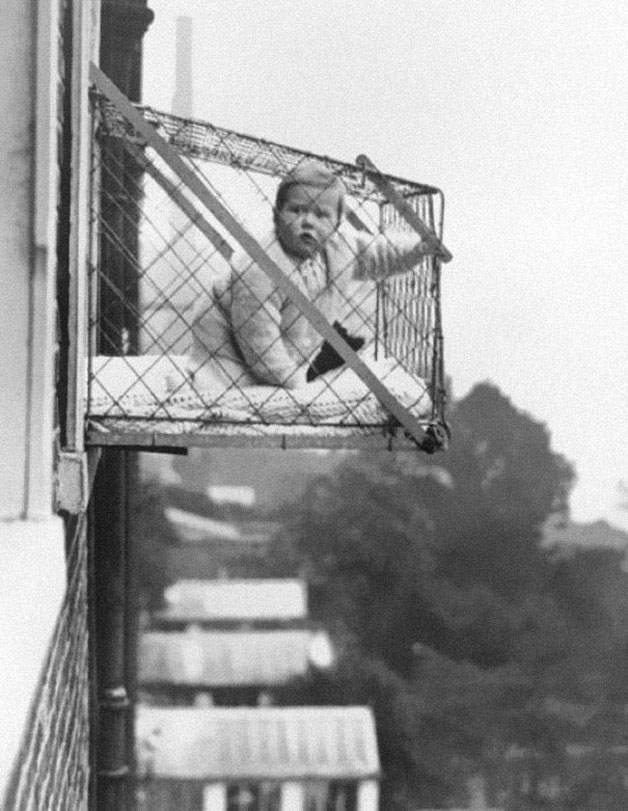 Designed in Finland in 1962 and used by the upper class during travels.

A rather crazy idea, and obviously never got very popular. 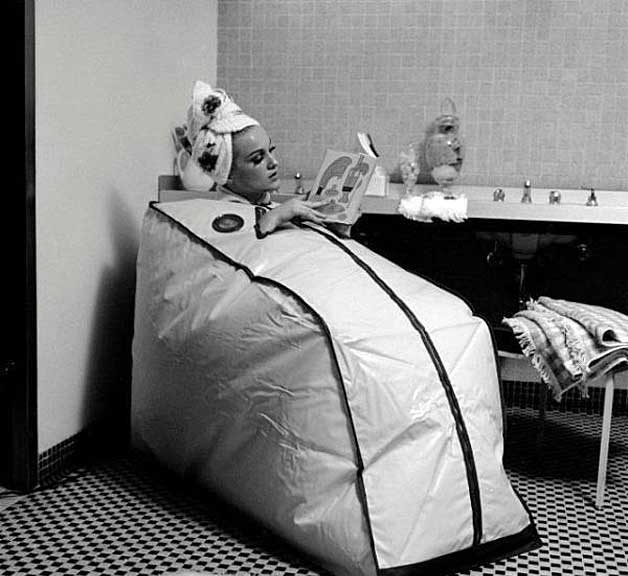 Very futuristic and extremely compact for its time. The Japanese have always been on the frontier of small tech design.

This small TV could fit everywhere and was perfect for traveling. Here it is used at a hospital. 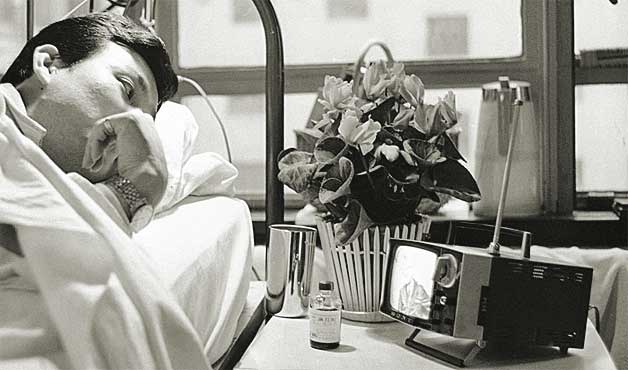 The original Murphy Bed patented by William L. Murphy around 1900.

He was the first to patent the bed system, and to this day the Murphy family still run the business he started early 1900.

The Murphy bed system has had a renaissance in recent years and has become very popular for small homes and apartments. 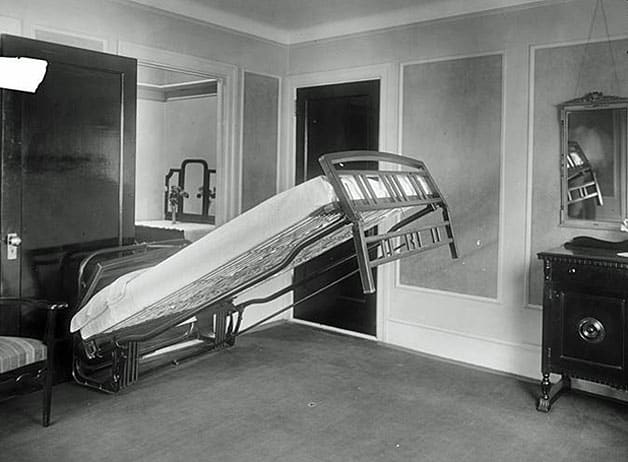 This folding chair was designed by Eileen Gray around 1930.

Chair / Bed with more than 50 positions

Brooklyn Museum has this multi-function chair/bed on a show. It can assume more than fifty positions! It is inspired by European military furniture used in the field.

Designed in New York by Cavedra Sheldon around 1870. 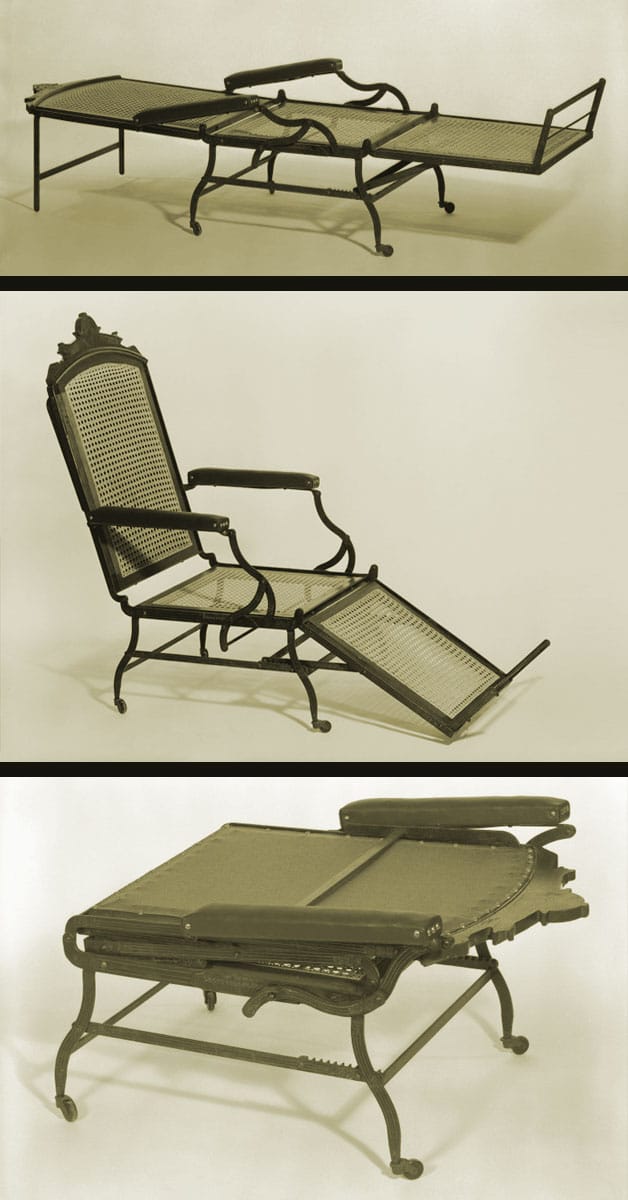 We haven’t been able to date the design of this clever furniture set. The chairs are designed to fit perfectly around the table, so they don’t take up much space when you need the room for other purposes.

Great outside-the-box thinking, and really well designed down to every detail! 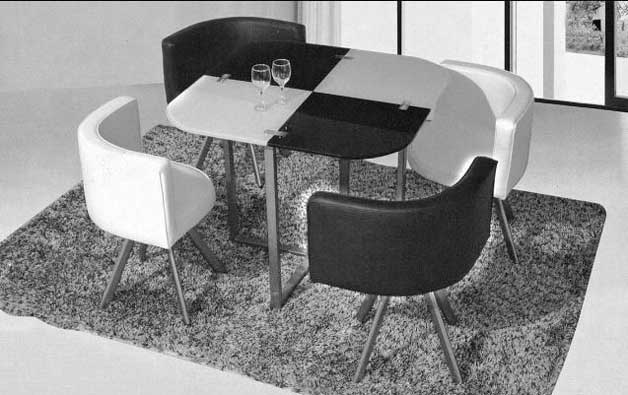 Murphy bed from the Marx Brothers

The bed folds down automatically when the brothers push a button on the wall – very cool. 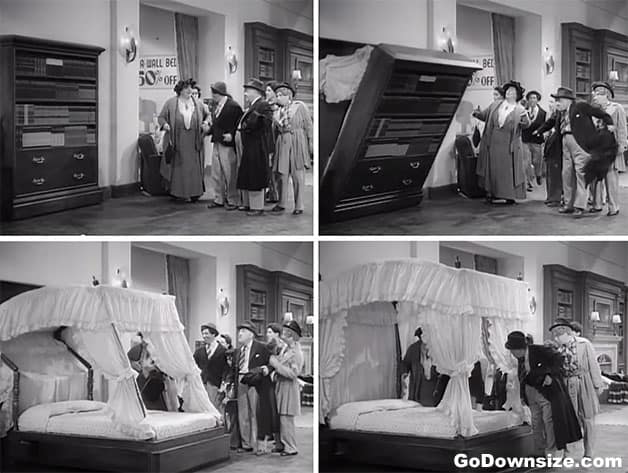 These kitchen booths have storage drawers installed. Great place to put your kitchen stuff. For a small kitchen, you can also use the space for seasonal clothing, comforters etc.

Check also these other space ideas for the small kitchen.

You’ll be amazed how much stuff you can fit into a drawer like this. 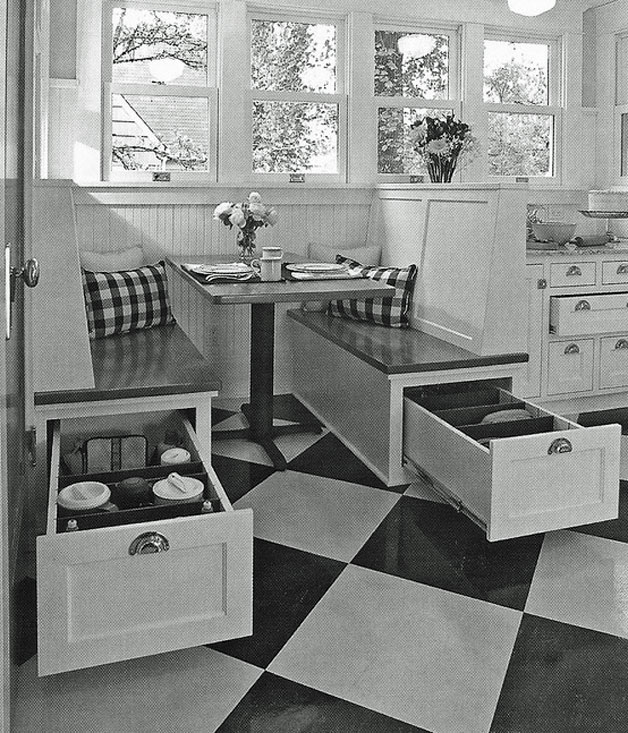 Kitchen unit from 1929 by Warren Nobel in Detroit. It’s from the early days of the electric era.

Very stylish and modern at the time, with its sleek curves and rounded corners.

It’s designed for small spaces and has everything you need: four-burner stow, an oven with adjustable height and place for storage below.

It’s very heavy though with its 500-pound weight but actually designed to bring with you. 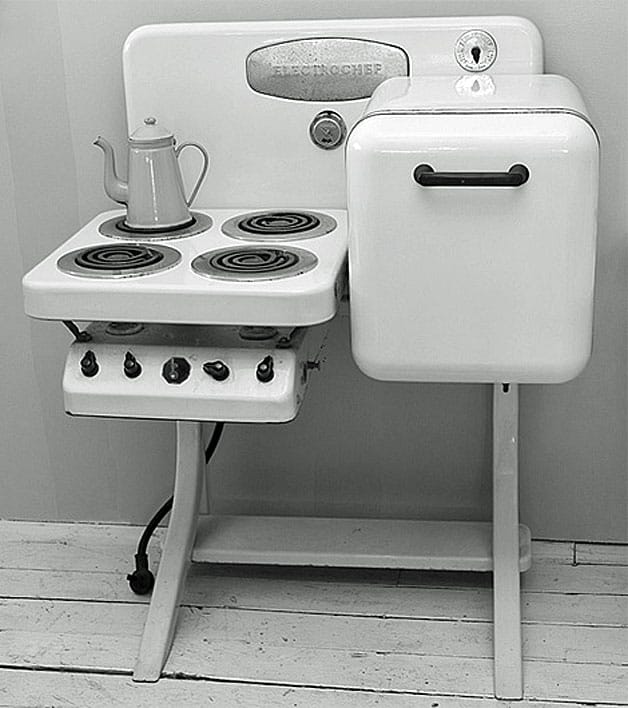 A sofa that folds into the size of a suitcase

This is an amazing piece of furniture from the early 20th century in England.

It can easily seat 4 people, and when you need the space for other purposes you can fold it away. 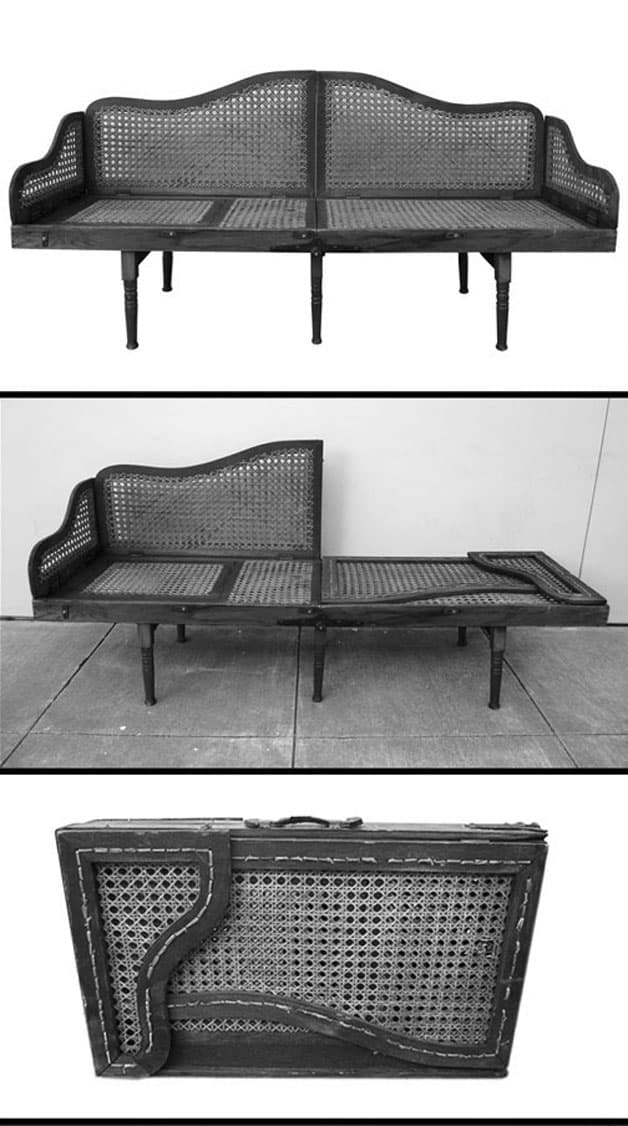 Found in an old Japanese lifestyle magazine. It was introduced at the 7th Tokyo Motor Show.

It’s extremely compact and very easy to bring on the subway or on the train.

It looks like it takes a while to assemble though, so I guess you wouldn’t fold it away on an everyday basis. 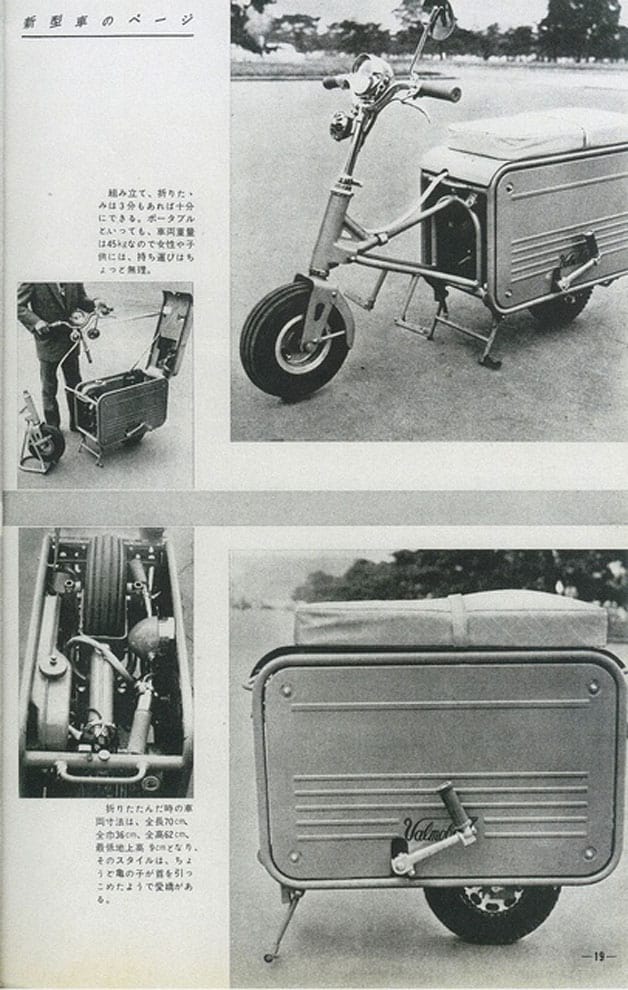 BMW is probably not the first car manufacturer that comes to mind when you take a look at this charming little car.

But that’s exactly what it is. May we present: The adorable BMW Isetta.

It was produced for the European market in the post-war years, and it became extremely popular due to its low price. 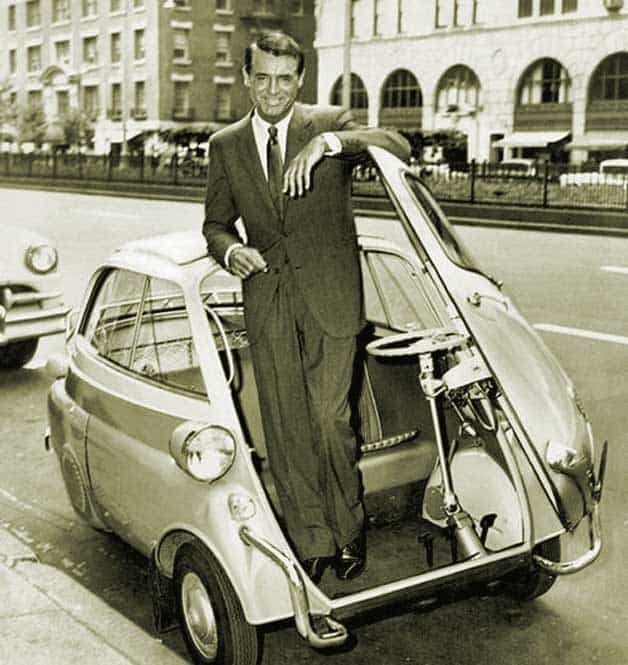 Ford T with a tiny house on top

This could be the very first tiny house on wheels. From the factory, it comes with a 20 hp engine and 2-speed transmission.

It would be very hard for this little engine to move around with a house on top unless the motor had some modifications.

I love the carefully designed details. If you cover the lower half of the photo you would never guess that this is attached to a car. 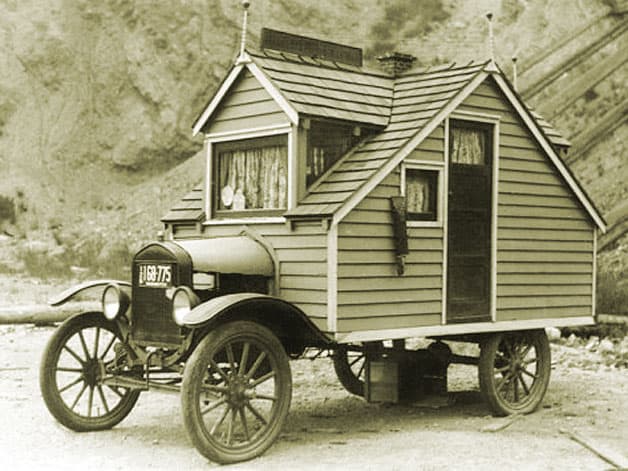 Used by the British army, but it never gained much popularity.

It is extremely heavy and not very useful, as soldiers normally have to stay off the roads to avoid being seen by the enemy.

Fun fact: At some point, soldiers actually jumped out of airplanes with this bike strapped to their backs! 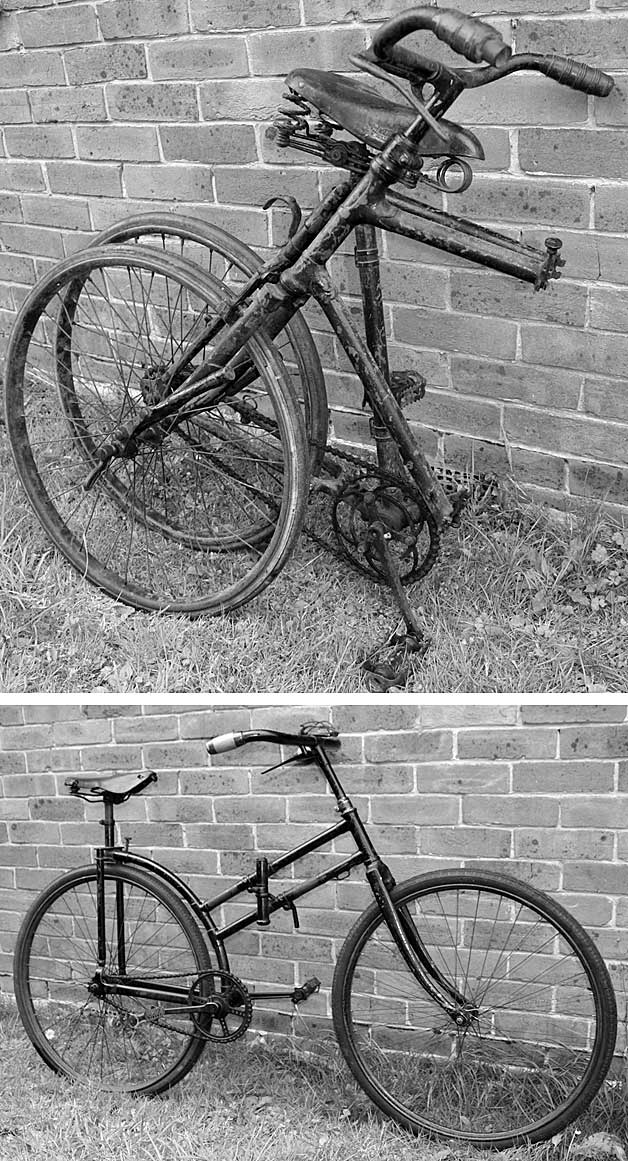 Here’s a photo from Chicago, 33 W. Monroe Street. It is a space-saving elevator garage that could hold up to 48 cars!

It must have been very futuristic for the time. Even today we rarely see elevator garages anywhere.

The driver would drive into the elevator, and stay in the car all the way up to the vacant spot.

He would then climb out of the car, and use the fire escape to get to the office. 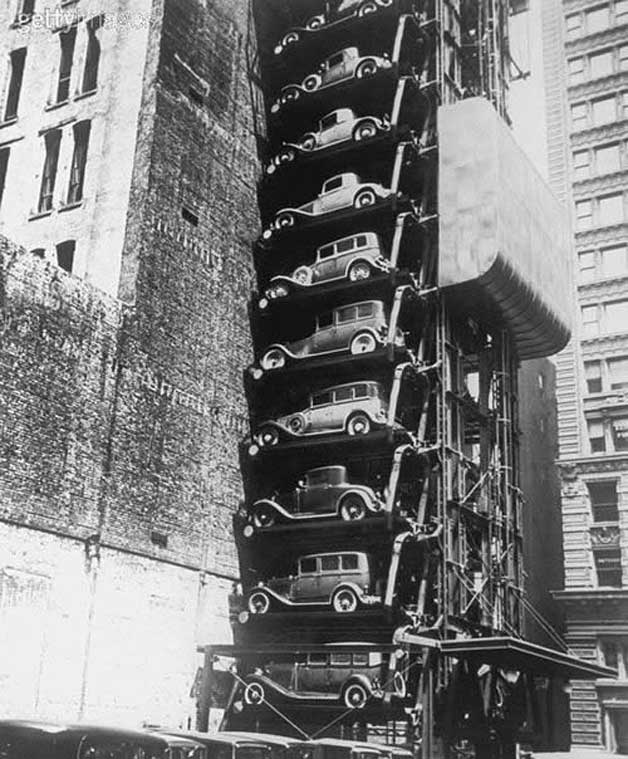 This last car is very unique, and undoubtedly one of the very first RV’s. 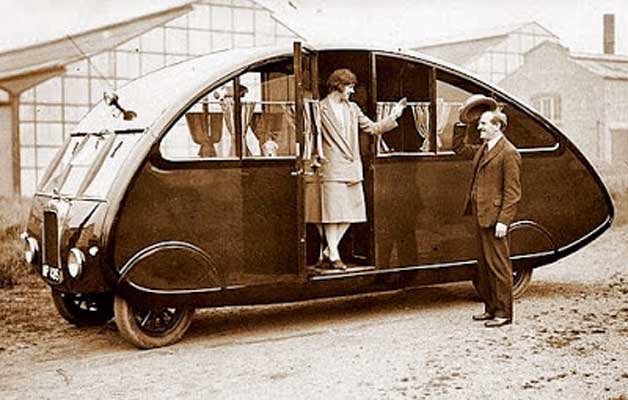