Though it’s definitely not for everyone, I think everybody can get inspired by it!

I see the 100 things challenge as a detox – from consumerism

Think about the 100 things challenge as an experiment, and choose to downsize to a number that works for you. Remember: it’s not about the number, it’s about making space for something else in your life!

Where it all began

The guy behind the idea and the book is Dave Bruno. He gave himself this challenge in 2009, and as he started to document it, a simple living community started to emerge around it.

Today thousands of people have tried the 100 things challenge, and many have fallen in love with this lifestyle.

Some say they will never go back to the way things were before, and others just set it as an experiment for a defined length of time.

What to include in the calculation

When you get started with the 100 things challenge, you’ll probably find out that you can’t count in everything you own. You have to define your own set of rules.

Normally you don’t count in kitchenware, furniture and other stuff that’s not entirely yours. But it’s really up to you.

The challenge is to set a goal, go for it, and see how it works for you!

You can choose to put your other stuff in boxes, so you can get it back again, or in case you want to change out an item on the list along the way.

When I first heard about the 100 things challenge I thought – well 100 is a low number, but I’m pretty sure I’m not that far from 100 belongings.

Together with my wife, I have been downsizing our space and belongings for two years now, and we have REALLY thrown out a lot of stuff. You can read our downsizing story here, and here is also some info about our we are up to.

My first step with the 100 things challenge has been to map everything I own. I have chosen to start with my clothes.

In the process, I just gave away another 15 items and packed away a box under the bed (at least for a couple of months in case I want it back).

Now I am down to 40 pieces of clothes. I still have to count all my other stuff, and as I learn more I will do a follow-up post about how it goes.

When I started out on this challenge, I was excited to see how it would be to live with only 100 things. I thought it would be tough at times, and I thought there would be several things I would miss.

There are a few things I miss (I’ll get back to that) but I have been surprised at how easy it is.

I have found the difficult part (for me at least) is not to live with 100 things. The hardest part was definitely to get rid of the stuff.

It takes a lot longer than you would think to downsize your stuff to a minimum. Some things you just need time to let go. Some of the last things I got rid of was the stuff of sentimental value.

I realized I had a lot of stuff with sentimental value, that I almost never took time to look at. So I decided to take pictures of them, instead of keeping them. This way I still have a place to go to for the memories, but they don’t fill up space anymore.

The picture above shows two things I decided to keep as digital pictures. To the left is a letter from my old Grandma (died last year at age 105!) and to the right is a print of my hand and foot from 1986 when I started school.

How much stuff do you use regularly?

If you go through your day you’ll probably also find, that you don’t use many of your belongings even on a yearly basis.

Most of the things I tossed I haven’t missed at all including clothes, books, DVDs etc. I really enjoy not having to sort through piles of clothes every morning. I only have jeans, t-shirts, and shirts that I really like. Awesome!

I think most people actually live with only a couple of hundred things, but they own thousands of things.

All the stuff under our beds, inside closets, in the basements etc. are out there for a reason. We rarely use them, so why not let go of it and get more open space (I love open spaces) or maybe move into a smaller space?

The stuff I have missed the most

My plan was to get rid of my books, and every time I wanted to re-read one of them, I would simply purchase an e-book version instead. I know this costs some money, but then I’m good to go for the future, and I also like being able to do word-search inside my books (digitally).

The challenge in this is, that I didn’t realize not all books come as e-books – especially older books.

Another benefit to physical books is that sometimes it’s just nice to put the computer away and read. When I go to sleep I try to not use my computer and iPhone for the last hour.

I spend so many hours in front of the screen, as I work online, follow blogs, write blog posts etc., so it’s nice to go offline at night time.

It’s nice to relax with a good book, so I will probably add a book or two to my list. But I can still pass them on to a good friend after reading. I guess I’ll have to add a kindle to my 100 thing list, or maybe an iPad can do the trick.

What to wish for at Christmas

I had a lot of fun with my friends and family all asking me what to give me for Christmas. The question is:

What do you give the man who has everything (he needs)?

I decided it was time for me to get a better stereo. I have been using an old hi-fi system I got from a friend with speakers that didn’t play too well. So I did a little research to find a good small stereo, that would also run a long time on battery, as I knew we are going to travel a lot during 2014 and forth. 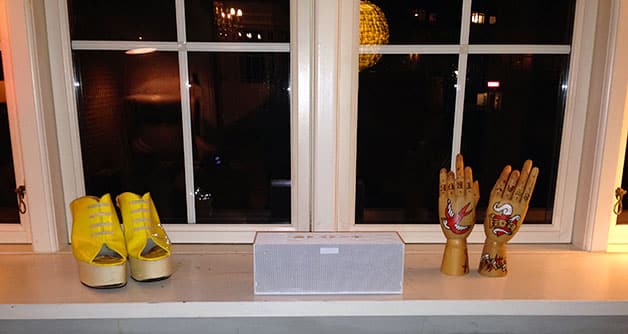 I told Maria to coordinate with everybody to get me a Jawbone sound system.

It’s an awesome little stereo with great sound, and as a music lover, I really appreciate (finally) being able to listen to music on a good stereo. It can hold battery for 20 hours, and it’s very small – perfect for traveling!

So I traded two speakers for one new item – not so bad :)

As some of you know I decided to only own personal 100 belongings for 12 months.

The whole process has been so liberating to me in many ways.

E.g. I really enjoy not having to think about what to wear in the morning, because I don’t have a lot of clothes.

Another thing I enjoy is how easy it is to find stuff in our apartment. I know where everything is most of the time because the clutter is gone.

But most days I don’t think about stuff, and that’s probably the biggest win, and I don’t spend much time shopping either.

People keep asking me how much stuff I own today, and as you might have guessed, I didn’t rush out to buy all my stuff back, but these items are some things I did buy: 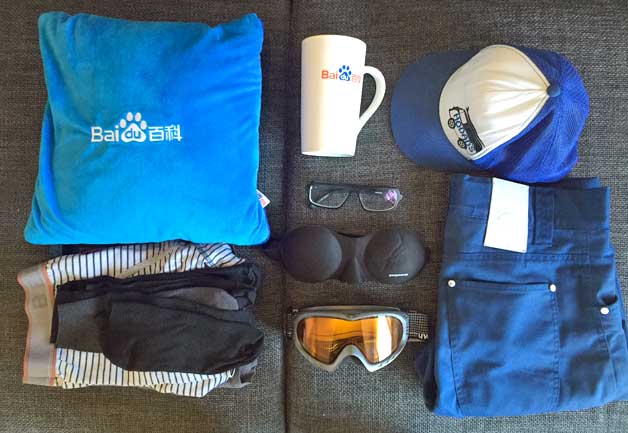 I own approx. 130 items now, and I mostly bought new clothes and travel gear.

I believe most people don’t really use more than a couple of hundred things, but most of us own thousands of things …especially when it comes to clothes!

Other stuff I acquired after the 12 months

Here are some of the stuff I decided to add to my items after the 12 months, that really means something to me.

One of the best investments I have ever made is noise canceling headphones.

We love to travel, and that means that I often have to work in odd places like airports, busses, hotels, co-working spaces etc.

The #1 annoying thing about intense traveling is, that you often end up working in places with a lot of background noise. 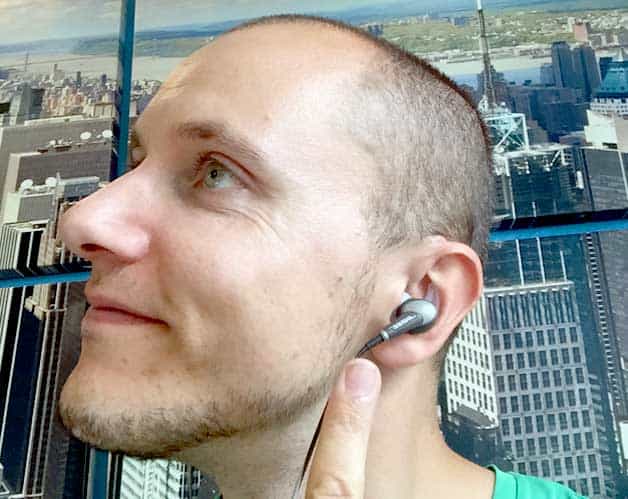 So being able to turn that off is just priceless!

They are quite pricey: $299 at Amazon, but I can recommend these to anyone who needs quiet time anywhere!

In Nov/Dec we stayed in California and found this cool Terminator sculpture made from metal nuts and bolts.

We also came across a shop that would 3D scan and print an action figure, and we just couldn’t resist doing that, so I had to add these figures to my stuff! 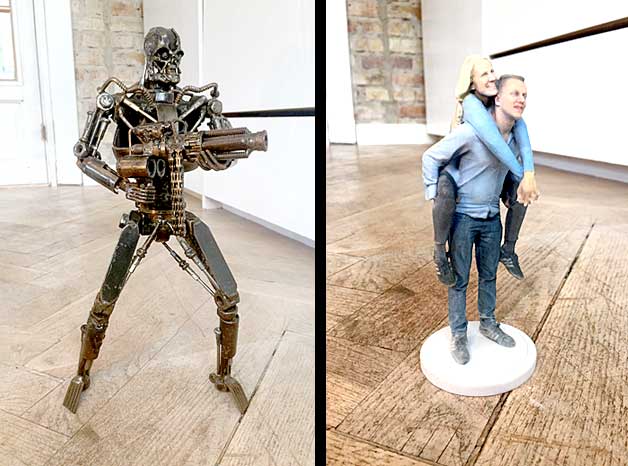 Check Maria’s travel videos about the Terminator sculpture and the Making of the 3D model.

Besides that, I might buy an electric cello. It has always been a dream for me to learn to play cello.

I have been playing trumpet since I was 5, but it’s very noisy, and not the ideal instrument to use in an apartment, and I have feared the same would the case with a cello.

But then I found out that you can buy an Electric cello for only $300 at Amazon, so I hope it will be a good solution to be able to practice in the long run, without being too annoying (noisy) for Maria and our tenant.

I am currently testing out a cello i have borrowed from a friend, and if I still like to play it in a few months time I will probably buy the electric one.

I am a big fan of postponing the purchase of expensive stuff, to be sure I really like it or need it.

Will you stick to only owning 100 things after the challenge?

This is a question I get quite often. To be honest I don’t know. At least it’s not a clear “No!”.

I really do enjoy the simple life with significant less stuff, and as we plan on traveling more and more, I think I will stay around 100 things. We are moving quickly towards geographical independence, as we are able to work online from anywhere.

So as we are shifting into a more nomadic lifestyle, it doesn’t really make sense to own a lot of stuff.

I think I will own a few more musical instruments, and I might also stock up a little on travel gear, but aside from that, I think I will stick to my 100 things. So my best guess would be to land around 120 things.

What’s your goal? Is this something for you?