Here are some hilarious boat jokes to make you laugh! 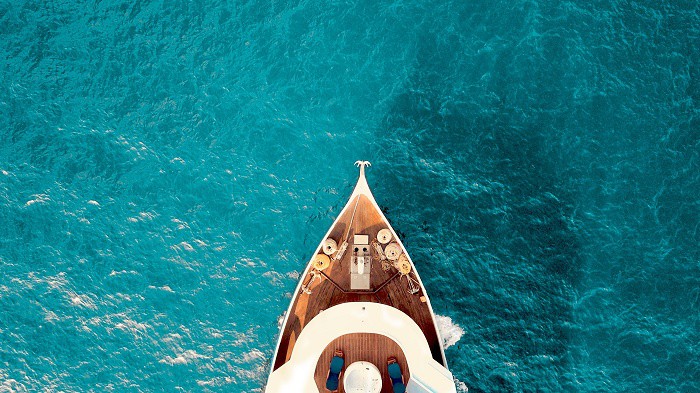 On a Friday afternoon a man calls home from the office and says to his wife, “Honey, the boss just asked me to go fishing for the weekend at a big lake up in Canada. This might help me get that promotion I’ve been wanting. So would you please pack enough clothes for me for a week and set out my rod and my tackle box? We’re leaving right from the office, but I’ll swing by the house to pick up my things. Oh! And, would you please pack my blue silk pajamas?”

The wife thinks this sounds a little fishy, but being a good wife she does exactly as her husband asks.
Late Sunday night “hubby” comes home… and he’s really tired.

The wife welcomes him home and asks if he and his boss caught a lot of fish.

“Oh, yes”, he answers. “Lots of Walleye, some Bluegill, and a few Pike. But, um, why didn’t you pack my silk pajamas as I asked you to do?”

The wife replies, “Oh, but I did, sweetheart… they were in your tackle box!”

Late one foggy night two boaters collide head-on while trying to navigate a narrow inlet channel. Both their boats were damaged, disabled and slowly sinking.

As they each watched their boats slowly slip away beneath them, the first boater said: ” You know, this is a sign that we should never take life for granted and that we should live it to the fullest”.

“You are right,” said the other boater as he opened a cooler and pulled out a bottle of bourbon whiskey. Let’s drink to living well for the rest of our lives.

The first boater took the bottle and, after a big swig, handed it back to the other boater who in turn quickly threw it into the river.

More than a little surprised the first boater exclaimed: ” You didn’t take a drink!?”

“Naw”, said the other boater, “I think I’ll just wait for the Coast Guard to show up.”

A group of Skippers is walking through town looking for crew, when they see a five-story building with a sign that read, “Crew Association: Ship’s Crew Available” Since they are without their crews, they decide to go in. The Security Guard, a very salty type, explains to them how it works. “We have five floors. Go up floor by floor and once you find what you are looking for you can go there and make a selection. It’s easy to decide since each floor has a sign telling you who’s inside.”

Everything seems wonderful, so they start going up and on the first floor the sign reads, “All the crew on this floor are beginners.” The skippers laugh, and without hesitation move on to the next floor. The sign on the second floor reads, “All the crew here are experienced, smart but weak.”

Still, this isn’t good enough, so the Skippers continue on up. They reach the third floor and the sign reads, “All the crew here are experienced, smart and strong.” They still want to do better, and so, knowing there are still two floors left, they kept going. On the fourth floor, the sign is perfect, “All the crew here are experienced, smart, strong and Former Americas Cup Champions.” The Skippers get excited and are about to go in when they realize that there is still one floor left.

Wondering what they are missing, they head up to the fifth floor. There they find a sign that reads, “There are no crew here. This floor was built only to prove that there is no way to please a Skipper!”

A preacher fell into the ocean and he couldn’t swim.  When a boat came by, the captain yelled, “Do you need help, sir?” The preacher calmly said “No, God will save me.”

A little later, another boat came by and a fisherman asked, “Hey, do you need help?” The preacher replied again, “No God will save me.”

The preacher asked God, “Why didn’t you save me?”

A sailor brings his boat up to a restaurant dock to eat lunch.

The dockhand says, “I’m sorry, sir, but I can’t let you dine here today. This establishment has a necktie policy, and you are not wearing one.”

“Well, go down below and put one on,” said the dockhand.

“I don’t HAVE one!” shouted the sailor.

The dockhand, not wanting to turn away a customer, said: “Well, why don’t you just find something that approximates a tie. That should be OK.”

After some time, the sailor comes out with a pair of jumper cables. “This is all I could find to put around my neck,” he said.

Sighing, the dockhand said: “OK, I’ll let you in with those, but just don’t start anything.”

A good old Alabama boy won a bass boat in a raffle drawing.

He brought it home and his wife looks at him and says, “What you gonna do with that. There ain’t no water deep enough to float a boat within 100 miles of here.”

His brother came over to visit several days later. He sees the wife and asks where his brother is.

She says, “He’s out there in his bass boat”, pointing to the field behind the house.

The brother heads out behind the house and sees his brother in the middle of a big field sitting in a bass boat with a fishing rod in his hand.

His brother replies, “I’m fishin’. What does it look like I’m a doin’?”

His brother yells, “It’s people like you that give people from Alabama a bad name, makin’ everybody think we’re stupid. If I could swim, I’d come out there whoop up on you!”

An old sea captain was sitting on a bench near the wharf when a young man walked up and sat down.

The young man had spiked hair and each spike was a different color…. green, red, orange, blue, and yellow.

After a while, the young man noticed that the captain was staring at him.

“What’s the matter old timer, never done anything wild in your life?

The old captain replied, “Got drunk once and married a parrot. I was just wondering if you were my son!”

An American businessman was at the pier of a small coastal Mexican village when a small boat with just one fisherman docked. Inside the small boat were several large yellowfin tuna.

The American complimented the Mexican on the quality of his fish and asked how long it took to catch them.

The Mexican replied that it took only a little while.

The American then asked why didn’t he stay out longer and catch more fish? The Mexican said he had enough to support his family’s immediate needs.

The American then asked, but what do you do with the rest of your time?

The Mexican fisherman said, “I sleep late, fish a little, play with my children, take siesta with my wife, Maria, stroll into the village each evening where I sip wine and play guitar with my amigos. I have a full and busy life, senior.”

The American scoffed, “I am a Harvard MBA and could help you. You should spend more time fishing and with the proceeds, buy a bigger boat. With the proceeds from the bigger boat, you could buy several boats, eventually, you would have a fleet of fishing boats. Instead of selling your catch to a middleman you would sell directly to the processor, eventually opening your own cannery.

You would control the product, processing, and distribution. You would need to leave this small coastal fishing village and move to Mexico City, then Los Angeles and eventually New York City where you will run your expanding enterprise.”

The Mexican fisherman asked, “But senior, how long will this all take?”

“But what then, senior?”

The American laughed and said, “That’s the best part. When the time is right you would announce an IPO and sell your company stock to the public and become very rich. You would make millions.”

“Millions, senior? Then what?

The American said, “Then you would retire. Move to a small coastal fishing village where you would sleep late, fish a little, play with your grandkids, take siesta with your wife, stroll to the village in the evenings where you could sip wine and play your guitar with your amigos.”

Related Article: 13 Clever Ways to Get a Good Deal on (New) Boats