Recreational vehicles (RVs) are also known as motor homes and are classified into three classes, namely Class A, Class B, and Class C.

If you are ready to purchase your own RV or have seen some different ones on the road, you may be wondering if they would be classified as trucks?

If curiosity has gotten the better of you, then you are in the right place!

Class A RVs are commonly built on either a commercial bus chassis or commercial truck chassis. 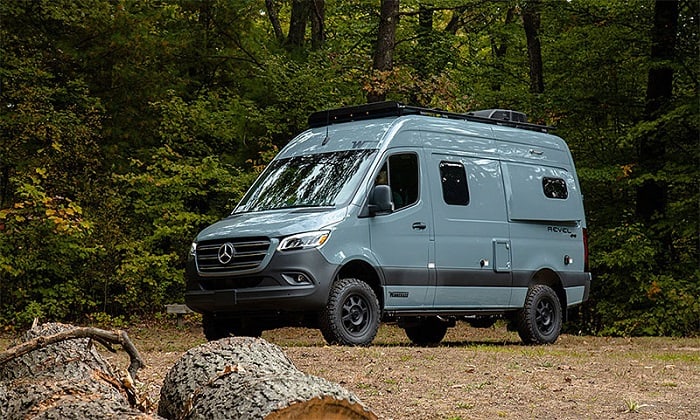 The Three Classes of RVs:

There are three different classes that are used to categorize the different types of RVs.

This class of RVs is usually built on a truck or bus chassis and resembles an 18-wheeler truck.

They have large, 22.5-inch wheels that support the heavy load of this class motor home.

Class A’s are the most luxurious on the market; however, they are extremely heavy on fuel consumption, and Class A RVs are also really heavy.

Class B RVs look very similar to an over-sized van.

Camper vans are often classified as Class B RVs.

This class features the least expensive RVs in the market and do not have any slide outs.

The Class C motor home is a combination of Class A and Class B and is built with a cabin chassis.

They feature a fuel economy that is not as high as Class A and not as low as Class B.

They are often identified by their over-cab sleeping area.

How Big Should an RV be to be Considered a Truck?

There is some common confusion in the U.S.A when it comes to truck classification.

The spectrum of rules that make a vehicle a truck is very broad.

“Light-duty truck” means any motor vehicle rated at 8,500 pounds GVWR (gross vehicle weight rating) or less, which has a vehicle curb weight of 6,000 pounds or less.

According to the Electronic Code of Federal Regulations at Cornell University, light-duty trucks also have a basic vehicle frontal area of 45 square feet or less, which is:

In addition to the above, removable rear seats or the ability to raise ground clearance to approximately 8 inches or higher also classifies a vehicle as a truck.

This means that even the smaller Class C motor homes would be considered a light-duty truck if they have a GVWR less than 8500 lbs.

If an RV weight more than this, it will be classified as a heavy-duty truck.

A fifth-wheel travel trailer is a large trailer that needs a fifth wheel hitch to tow.

This is often a favorable choice for RV enthusiasts because a 5th wheel can be detached from the truck once it has been parked safely.

Fifth wheels can be as long as 45 feet and weigh upwards of 10,000 pounds, already falling into the category of a heavy-duty truck.

With Fifth Wheels being so heavy, one has to consider the towing capacity of the pickup truck, which in itself is classified as a light-duty truck.

The unique space is found in the rear with a large ramp-door for easy access.

Toy haulers are generally fifth wheel or travel trailers, although one may find that some of the higher market motor homes can also be a toy hauler.

Unlike other types of RVs, toy haulers have been manufactured to specifically haul cargo.

For this reason, they have a higher weight rating, and the floor of the “garage” and the access ramp has been reinforced to hold the weight of “toys,” such as motorcycles and four-wheelers.

Since a toy hauler carries cargo and weighs anything from 7,000 to 20,000 pounds, it is classified as a truck. One also requires a heavy-duty truck to tow the toy hauler.

How Do you Define a Truck Camper?

A truck camper, or TC, is a recreational vehicle that may be carried in the bed of a truck.

In North America, this RV type is often referred to as a slide-in or cab-over. A truck camper is the smallest RV available, and 42 states in the U.S.A do not consider them as RVs, but as cargo trucks instead.

It is common for those who want to explore the RV lifestyle to start with a truck camper before progressing onto the larger classes of motor homes.

Although still considered a light-duty truck, the truck camper has been designed to drive, store, and park more easily than a normal, larger truck.

What are the Speed Limits for the Different RV Sizes?

In the United States, it is important to remember that different states have different rules for certain types of vehicles. Special speed limits exist for large vehicles over 8,000 pounds; this includes trucks of all classes.

Since an RV is considered a truck, they follow the same speed limits and rules as trucks.

The average speed limit is 55-65 mph but make sure you check the rules and speed limits of each state you are traveling in.

One must also consider the size of the RV they are driving; larger RVs will need to travel at slower speeds, especially toy hauler RVs that may be carrying additional heavy cargo.

The recommended average speed for a large RV is 55 mph.

Fifth wheelers can travel at speeds as high as 75 mph, but this, of course, is not recommended.

RV Speed Limits For All 50 States

What is the Difference Between Class A, B & C Motorhomes?

Greenlings: What’s a light-duty truck, and why should we care?