Toy haulers are designed for people who want to carry extra vehicles, such as motorbikes and ATVs.

These trailers are set up like a fifth wheel RV, but the rear has a ramp and a sliding garage door.

Some toy haulers sacrifice living space at the front to provide a lot of garage space, while others manage to combine a generous garage with plenty of living room.

Because they are built to transport small vehicles, toy haulers are very sturdily constructed and have a much higher cargo capacity than other trailers.

Here is an estimate of how much toy haulers weigh:

As we already mentioned, there’s a wide range in the weight of toy haulers. 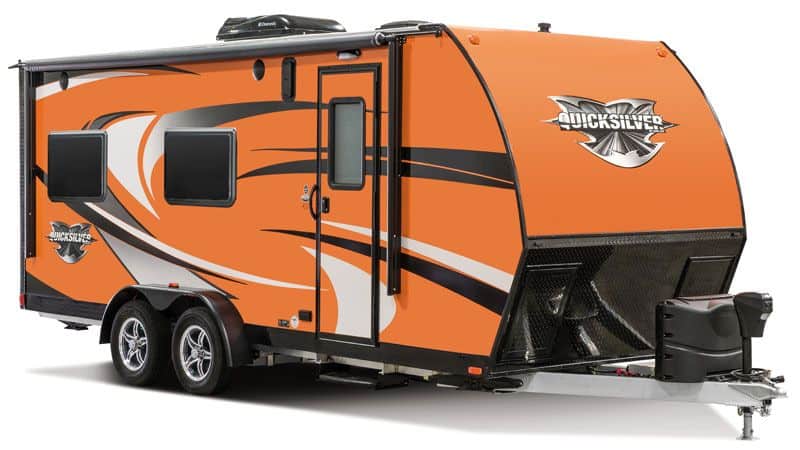 The Quicksilver VRV is based on an aluminum racing trailer platform and weighs a mere 3,700 pounds when unloaded.

The aluminum frame makes this tough, rugged-looking toy hauler light and strong, and also means that the trailer is resistant to rotting and leakage.

Measuring only 20 feet in length, the Quicksilver VRV is not only light but easily maneuverable, too, making it a great choice to be towed by smaller trucks or SUVs.

This toy hauler has a unique and utilitarian interior. The Quicksilver VRV has no permanent furniture inside – there are fold-down beds that extend from the sides of the garage – which means that interior space is maximized for cargo.

The utilitarian interior is hose-down safe, which means that this toy hauler can be easily cleaned after a muddy day on the trails. The Quicksilver VRV sleeps 6 and costs around $30,000.

Jayco has been a prevalent and successful trailer manufacturer for many years, and a good reason.

The Octane Superlite 161 is an intelligently designed toy hauler that weighs only 4,500 pounds when unloaded.

This super-efficient trailer is designed so that almost all of the garage space can be utilized to carry gear.

There’s a motorized queen size bed that sits snugly against the ceiling and can be dropped down into the garage space. Add in a convertible sofa, and this toy hauler sleeps 4 people comfortably.

This small, modern toy hauler is on the expensive side: you’ll end up paying around $26,000 for the Octane Superlite 161.

The Sportsmen Classic 180 TH is an awesome and more affordable option if you’re looking for a lightweight toy hauler.

Weighing in at 3,250 pounds and costing around $17,000, the Classic 180 has a 9-foot long primary cargo box that can fit even the largest ATVs. This cool little trailer also has added storage for bikes between the kitchen and bathroom.

This toy hauler is perfect for larger groups, as it provides a ton of sleeping capacity. There are double-width bunks at the front of the trailer that can easily sleep 4 adults, and the cargo/living area at the rear has a fold-down sofa that sleeps 2.

The Sportsmen Classic 180 TH has a cargo-carrying capacity of 17,500 pounds. 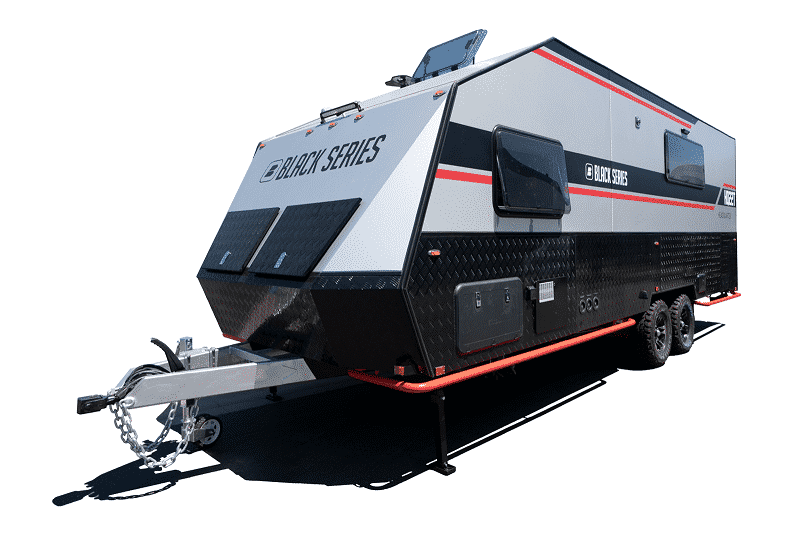 Costing around $80,000, the Black Series HQ22T is one of the more expensive toy haulers on our list.

This 28-foot long trailer weighs 6,504 pounds when unloaded, and with a garage that measures 13 feet by 7 feet, it has enough cargo space to haul even the largest ATVs.

There’s a little luxury involved in this toy hauler, too. The master bedroom has a comfortable queen-size bed, and there are 4 bunks in the garage that fold up against the walls when not in use.

The HQ22T has been built to be tough enough to handle all road conditions. It features a hot-dipped galvanized frame and 16-inch tires. There are also 2 150-watt solar panels, which means this toy hauler is perfect for going off-grid.

Genesis Supreme is a company that only builds toy haulers, so they really know what they’re doing.

The Overnighter has a unique design in that it features an open rear cargo area and a small, basic cabin.

The Overnighter weighs 8,200 pounds when unloaded and measures between 14 and 18 feet long. When not being used for cargo, the rear platform transforms into a cool outdoor patio with a large shade awning.

For the interior living space, there are five 31-foot floorplans to choose from, all featuring a bathroom, bedroom, and kitchen.

The Overnighter costs around $20,000 and features a 50-gallon freshwater tank, a 30-gallon black water tank, and a 20-gallon grey water tank.

The Momentum is another toy hauler that features an open cargo ramp at the rear. Grand Design refers to this area as the “attached open garage,” It has been designed for hunters, tailgaters, and others who want separation between cargo and living space.

The cargo ramp can be turned into an awesome open patio for entertaining. The rear wall opens to reveal a fully-equipped outdoor kitchen, a flat-screen TV, and an entryway to the interior living quarters.

The roomy cabin can sleep 6 comfortably and has an LED TV and a cozy electric fireplace.

The Jayco Seismic 40B weighs 15,869 pounds when unloaded and has been designed as a luxury toy hauler that is comfortable to live in while tough enough to haul plenty of gear.

In the main lounge area, theater seating faces the entertainment center, and there are also freestanding chairs.

The latest version of the Fuzion 373 features an innovative independent suspension that is automotive grade. The rubberized, modified A-arm suspension makes this toy hauler easier to tow and creates less wear-and-tear on the components.

The suspension was developed in conjunction with MORryde and has been shown to provide a vastly superior shock absorption rate.

The living space inside the Fuzion 373 features a large master bedroom with a wardrobe closet, washer/dryer, and dual-entry bathroom. 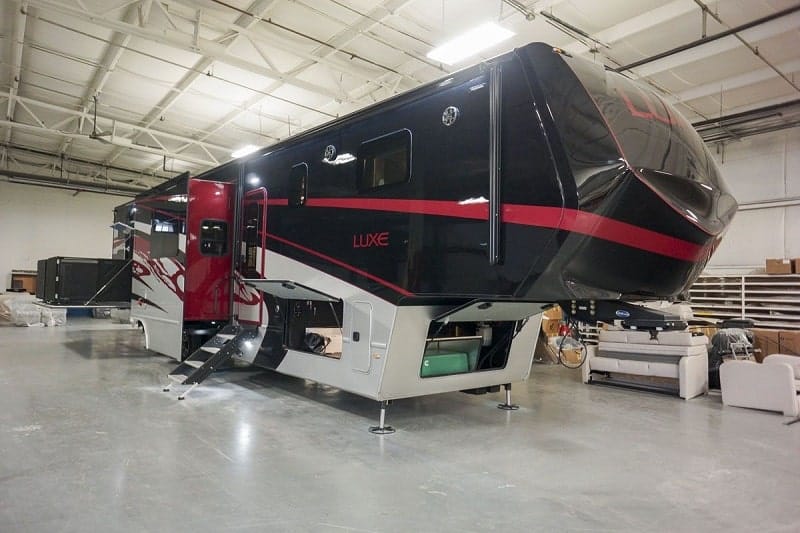 The Luxe 44FB has been designed as the ultimate luxury toy hauler. This trailer weighs 24,000 pounds and measures over 45 feet in length.

The 14.4-foot garage in this luxury toy hauler is massive and features electrically powered bunks and a cool loft. The ramp door has a 5,000-pound rating, meaning this toy hauler can carry pretty much anything you’ll need.

The ‘flex-space’ garage can be used as a second bedroom, a laundry room, or any room the customer wants, and the ramp can be set up as a patio to provide outdoor living space.

The interior provides luxury living space that makes this toy hauler one of the best on the market, although that comes with a price-tag of $150,000.

There’s a U-shaped kitchen, a pop-out dinette area, and an electric fireplace in the center. Barn doors open to a huge master suite with a king-size bed, bathtub, TV, and a massive closet.

What is the Lightest Toy Hauler?

In recent years, a new breed of ultra-lightweight toy haulers has emerged, and the lightest of these is the Forest River No Boundaries NB10.6.

This unique toy hauler is almost like a teardrop trailer with a garage. It has a fold-down ramp door and measures only 11 feet in length.

The Forest River No Boundaries NB10.6 is fairly basic compared to other toy haulers and is a good choice for those who want to spend most of their time outdoors.

Although there’s no luxury in this toy hauler, there’s plenty of sleeping room and ample storage for bikes, kayaks, and small ATVs.

How Much do the Biggest Toy Haulers Weigh?

The Luxe Toy Hauler 44FB that we mentioned earlier is an example of a toy hauler that weighs a massive 24,000 pounds.

Another huge toy hauler is the Heartland Cyclone 4220 Giant. Aptly named, this toy hauler weighs 20,000 pounds when unloaded and has all the luxury features you’d expect, such as a king-size bed, culinary kitchen, and an option for a big bathtub.

What is the Best-Selling Toy Hauler?

According to RVT.com, these are the most-viewed toy haulers:

Why are Toy Haulers so Heavy?

Toy haulers are designed to be super sturdy and tough to carry as much weight as possible.

Toy haulers usually have a much heavier hitch weight than other travel trailers.

Recently, newer, lighter toy haulers have begun to grow in popularity. These toy haulers are built with an aluminum frame and body construction.

This means that although they are very light, they are extremely light and durable.

What are the Most Common Pickups

These days, it’s possible to tow a lightweight toy hauler with a mid-size SUV, but it’s always a good idea to have a higher tow rating than the toy hauler’s weight.

Here are the most common pickups used to tow toy haulers:

It has a 6.7 Liter Cummins Diesel inline-six engine, and for extra traction and support, it has dual rear wheels.

The Chevrolet Silverado is definitely one of the most popular pickups used to tow toy haulers.

A popular classic, and perhaps the most popular truck used to tow a toy hauler, the Ford F-450 Super Duty can tow a whopping 37,000 pounds.

This pickup truck has 475 horse-power under the hood and 1,000 pounds-foot from the enormous 6.7-liter PowerStroke diesel V8 engine.

Can a Half-Ton Truck Tow a Toy Hauler?

As we’ve already mentioned, a new breed of toy hauler is available on the much lighter market and easier to tow.

Although you’ll pay a premium price for one of these ultra-light toy haulers, the benefit is that they are easily maneuverable and towable while still being able to haul good amounts of cargo.

A half-ton truck like the Ford Ranger is perfectly capable of towing lightweight and middleweight toy haulers.

The Ford Ranger is a top-rated and extremely versatile pickup truck with a maximum tow rating of 7,500 pounds. This means the Ranger would be ideal for towing some of the toy haulers on our list.

The Ranger features a 2.3 Liter, 4-cylinder engine, which provides a much flatter torque curve than some of its rivals. This means it’s a half-ton pickup truck that’s better suited to towing toy haulers and other trailers.