Large motorhomes are wonderful.  They provide all the luxuries and amenities of home while remaining almost as mobile as their smaller counterparts.  The drawback is that they use up a lot of fuel and aren’t great for day excursions away from the campsite.

For this reason, many class A and class C owners use a tow car. A Smart Car is a popular choice, but is using a smart car as a tow car for RVing really a good idea?

In this post, we’ll go over the advantages and disadvantages of using a Smart Car as a tow car for RVing.

What Is A Smart Car 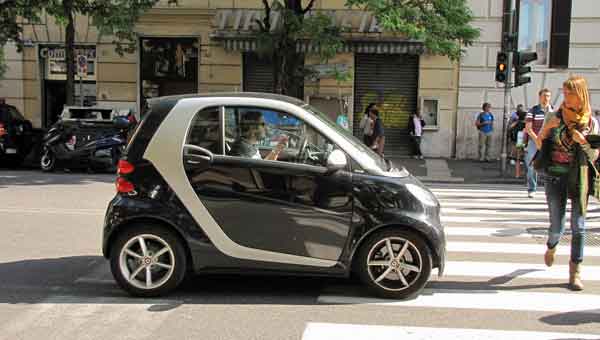 A Smart car is one of the smallest cars on the market.  This car was conceived in the ’70s but didn’t reach the United States until the year 2008.  There are two person models as well as four-seater models but the two-person model is the one you’ll find in the United States.

The Advantages of Using A Smart Car As a Tow Car

A smart car’s main advantage as a towable vehicle is its size.  These vehicles are only about 8 feet long so they don’t add nearly as much to the length of a motorhome as a full or even mid-size sedan would.

For example, a Honda Civic is more than 15 feet long and a Toyota Camry is over 16 feet long.

These vehicles are narrow as well.  A smart car is about 65 inches wide while a Honda Civic is 71 inches wide and a Toyota Camry is 72 inches wide.

The short length and the narrow width of the smart car help reduce wind drag and make towing more stable than it would be with a larger car behind the motorhome.

Another advantage of the smart car is its lightweight.  A smart car can weigh as little as 1,800 pounds.  This makes the smart car one of the most towable vehicles as any motorhome will be powerful enough to pull it.

To put his number into perspective, a Honda Civic weighs around 2,800 pounds and a Toyota Camry weighs in at around 3,400 pounds.

A gas powered smart car is also built to be flat-towed.  This means that all four wheels can be left on the ground so you don’t need to use a flatbed trailer or any other additional towing devices besides the hitch.

These vehicles also offer great fuel consumption.  Gas-powered models can get 38 miles a gallon and electric versions can drive over a 100 miles before they have to be charged.  Since electric is free at most short-term campsites, a smart car owner can charge their vehicle for free. 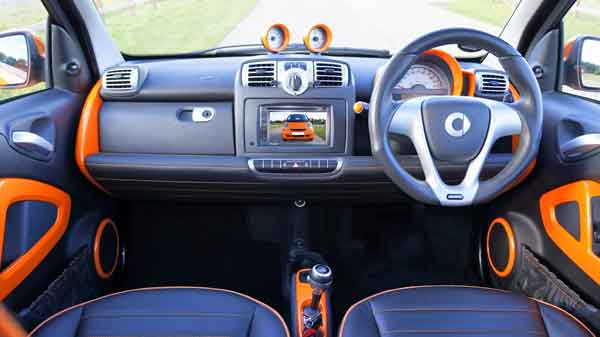 Another distinct advantage of the smart car is its driveability.  It is said to have the tightest turning circle of any mainstream car.  This is great for travelers who find themselves turning around to see sights or to stop at interesting looking locations.

Additionally, because these cars are so small they are easy to park and easy to maneuver through heavy traffic.  Once again, this is great for travelers since parking garages and heavily navigated roads will be seen often.

The Disadvantages of Using a Smart Car As a Tow Car

One problem with using a smart car is that the electric versions can’t be flat towed.  This means that people towing electric smart cars will need to get a car trailer which negates some of the size and weight benefits of towing a smart car.

Additionally, the size of the smart car can also be a disadvantage.  Smart cars can only hold two passengers and they do not have much room for cargo.

This means that a family of three or four people traveling in a motorhome can’t fully take advantage of having a tow vehicle along with them.

The small size of the smart car also makes them poor to drive on highways and in high wind areas.  It also brings up some safety concerns as some people feel these vehicles are too small to be safe in a crash.

This being said, the number of traffic fatalities among smart car owners is small and they tend to do well on independent crash test studies.

The range of the electric smart car may also be a problem for some people.  Electric vehicles from Tesla have a larger range and hybrid electric vehicles give users the option to use gas when necessary.

A great example of this is the Chevy Volt which can run off pure electricity for up to 53 miles and can then switch to gas for over 300 miles more.

Pricing can also be a factor as some people may want to buy used tow vehicles.  Because these vehicles are somewhat rare in the United States, people may have a hard time finding inexpensive used ones to buy.

Ironically, it can also be hard to sell these vehicles.

The U.S. market for this type of vehicle is very limited and you may have to wait a while before you find someone that is interested in buying your used smart car.

If you do decide to keep your aging smart car, you may have trouble maintaining it.  These cars are mostly made in France and parts can be more difficult to come by in the United States.

Also, the small engine compartment is terribly difficult to work in so the backyard mechanic will likely struggle to perform simple DIY maintenance tasks on their smart car.

One often overlooked disadvantage of a smart car is the fact that it can easily be vandalized.  Back in 2014, a group of people was going around San Francisco flipping smart cars over just for the fun of it.  You can read more about this story at https://www.nbcbayarea.com/news/local/Suspects-Flip-Over-Smart-Cars-in-San-Francisco-254177981.html

As the article states, however, this isn’t anything that couldn’t be done with other smaller cars.  Years ago, VW bugs were the target of this type of vandalism.

Also, these cars really aren’t meant for faster highways and you may have trouble getting up to speed on large Interstate highways.

How to Tow a Smart Car

A gas powered smart car just needs to have a tow bar added to the front of the vehicle so that it can be pulled, a brake line added to the vehicle so that its brakes can function, and a bungee cord added around the steering wheel so that the wheel stays straight.  In fact, some people with larger motorhomes don’t even bother to add an auxiliary braking system to the smart car.

Alternatively, owners could buy a tow dolly and hook the smart car up to that.

Electric powered smart cars cannot be towed on a dolly or with a tow bar.  These vehicles will need to be driven onto a car trailer and the trailer will need to be hooked up to the motorhome.  This adds to the weight and cost but does come with the advantage that the smart car will not be subject to the conditions of the road.

Alternatives to Towing a Smart Car

As a towable vehicle, the smart car really doesn’t have any direct competitors.  For example, a person could find another small vehicle like a Honda Fit or Volkswagon Golf but these cars are still much heavier and more expensive than a smart car.

Alternatively, a person could go with a small scooter or motorcycle but then they wouldn’t really be driving a car anymore.

A golf cart or ATV would be a great alternative to someone looking for a small vehicle but these vehicles can’t legally be driven on highways.

If you’re looking for the smallest and lightest tow vehicle then a smart car is your best choice.  People who own these vehicles say that they are a dream to tow.

If you’re looking for a vehicle that meets the ordinary demands of normal driving on large American highways, you may come up disappointed.

Just be sure you know why you’re buying a smart car before you buy it and make sure that it meets all of your needs and you’ll be sure to make a good choice.