Pontoon boats offer a unique way to get out on the water.

They are great for water recreation, entertaining, and I can’t think of a better way to have a barbeque out on the water than from the deck of a pontoon boat.

However, pontoon boats aren’t for everybody, and there are definite reasons for buying them or for choosing a different type of boat instead.

Here are some pontoon boat statistics and numbers you ought to know before buying: 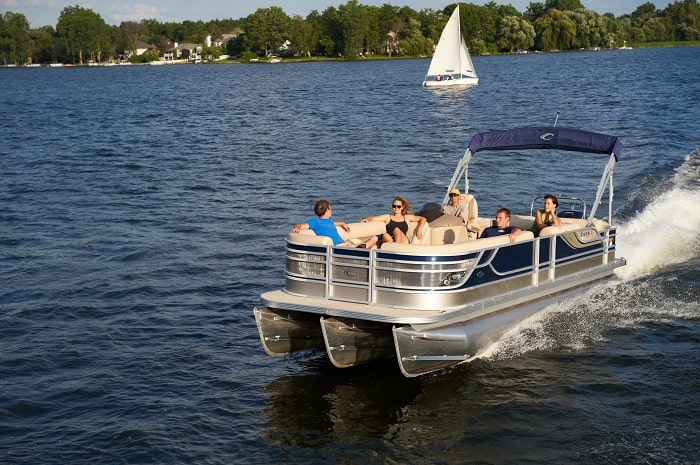 1. The Sale of Pontoon Boats Increases by 3% to 4% Each Year

Other boat types have only had sales increases of about 2% to 3%.

This means more and more people are becoming interested in pontoon boats versus the other types of recreational boats.

Industry experts feel that one of the reasons for their rising popularity is their recently increased speeds.  Pontoon boats are now getting larger engines, which allows them to compete with other classes of boats.

For example, a pontoon boat can now be used to pull water skiers, kneeboarders, and tubers.

On top of this, they can still be used as the “floating living rooms” that previous generations referred to them as.

The increase in pontoon boat sales should also lead to more aftermarket parts and accessory options as well as a larger used market to draw from.

This will only increase as time goes by, so it might make sense to take your time when purchasing a pontoon boat as they are sure to get better and less expensive with each passing year.

2. About 62,000 Pontoon Boat Sales are Expected Within the United States for the Year 2020

Even with the global pandemic and a down economy, the demand for pontoon boats is still strong.

People are looking to engage in more outdoor recreational activities than before.

However, the trend still points upward, and I imagine it will only continue over the next few years.

Pontoon boats are the natural choice for people who are new to boating and who aren’t quite sure about their needs for their boats.

This makes them great entry-level boats for people just discovering life on the water.

3. Within the Boating Industry, the Pontoon Boat Industry was the Quickest to Recover after the Great Recession

It is believed that these boats recover the quickest because they are perceived as being boats that provide the most value.

This is because these boats are versatile and can be used for recreational boating, water sports, and fishing.

As a result, pontoon boats are an all-around favorite for families and boaters with a wide range of interests.

This makes them a more economical choice for people buying boats on a budget.

However, this doesn’t mean that boomers are the only people buying pontoon boats.

The industry has also seen a lot of recent interest from millennials.

Millennials have been the least likely generation to buy boats, so the fact that they are buying pontoon boats could be one of the reasons the pontoon industry is flourishing while the other boating segments seem to have remained stagnant.

5. Pontoon Boats make up 20% of the Recreational Boating Market

This number is only increasing with each passing year, and it won’t be long before one in every four new boats is a pontoon boat.

Many experts feel that this increase will feed off of itself and that the pontoon boat industry will continue to take over the market.

Pontoon boats tend to last longer than other types of boats, and because of this, new pontoon boats will have to come down in price to compete with the used market.

On top of this, pontoon boat manufacturers are continuing to innovate, which is only increasing the utility of the pontoon boat.

The more versatile this boat becomes, the more people will choose to buy it over the more specialized types of boats.

This length puts them in line with other smaller watercraft purchases and helps add to their versatile nature.

Of course, this doesn’t mean that these lengths are the only available lengths you can choose from.

7.  Pontoon Boat Layouts Have Become more Modular than in Years Past

The new modular nature of pontoon boats makes them more useful to buyers who want to use their pontoon boats for a wide range of activities.

This means that it might be worthwhile to buy a newer pontoon boat instead of an older one.

However, it should be noted that for every new boat that is sold every year, about three pre-owned boats are sold.

The used boat market is much larger than the market for buying new boats and for a good reason.  Used boats are generally a lot less expensive, and they reduce the amount of depreciation the new owner is exposed to after they’ve made their purchase.

To reconcile this, you may want to consider buying a preowned pontoon boat that needs some work.

While you’re doing repairs on it, you can create modifications so that your used pontoon boat can be just as modular as any new pontoon boat you might have purchased instead.

8.  Pontoon Boats Generally have a Width of About 8 Feet

Boats with widths of 8.5 feet and below are legal to tow without any special considerations.

This means that most pontoon boats are trailer-able boats that can be taken anywhere their owner wants to go, which expands the pontoon boat market to people that do not have the ability to dock or to store a boat each year.

It also makes owning a pontoon boat less expensive than owning a larger boat that cannot be easily trailered.

Pontoon boats can easily be stored in a person’s driveway or backyard, which makes it easy for any homeowner to use, store, and maintain.

9. A Pontoon Boat’s Turning Radius is About as Wide as the Boat is Long

This means the handling on a pontoon boat isn’t as good as it is on other types of boats.

As a result, people planning to dock in tight areas might want to reconsider getting a pontoon boat.

Another thought to consider is that a pontoon boat might not be quite as good for recreational activities when compared to other sport boats.

For example, you’ll need more room when pulling water skiers and tubers than you would need with a traditional speed boat.

My advice would be to consider where you’ll be using your pontoon boat before you decide to buy one.  Check out the docks and waterways in your area, and if you don’t see anyone else with a pontoon boat there, you might want to ask yourself why.

This could end up saving you a lot of time, frustration, and money in the long run.

This number is normally cut in half for people who are only doing half-day rentals.

While this might seem like a lot of money, it could end up saving you a whole lot more in the long run.

For instance, you might want to rent a pontoon boat for the day before you decide to buy one.

Renting first will give you a chance to see if you actually like operating and using a pontoon boat before you invest in one.

Also, some people may decide that it is less costly to simply rent a pontoon boat each year rather than to buy one.

Many boat owners end up buying boats only to find that they only use them a few times a year. If you feel you might be one of these people, you’ll end up spending between $900.00 to $1,200.00 a year in rental fees.

This number is far less expensive than what it would cost to buy, insure, and maintain a pontoon boat.

I hope you found these statistics and facts about pontoon boats useful.

Pontoon boats aren’t for everyone, but if you study the information before you make your purchase, you can see if it is a good purchase option for you.